The Brooks Aqueduct is a 3.2km long reinforced concrete structure constructed between 1912 and 1914 by the Canadian Pacific Railway Company. The hydrostatic catenary flume design was a unique piece of engineering at the time and is the largest constructed aqueduct of its kind. The aqueduct was part of an irrigation system that allowed the rise of agriculture in southern Alberta in the early 20th Century.

The semiarid conditions of southern Alberta, in particular the Palliser triangle, proved a daunting obstacle to the development of large-scale agriculture in the region [1]. The potential for converting the dry grasslands of southern Alberta into productive farmland was identified by John Macoun, which highlighted the rich soils and warm climate ideal for growing grains, with reliable water available as the one major impediment [2]. The conversion of grasslands to farmland started in the late 1870s with small-scale irrigation, and larger operations beginning in the 1890s [1]. There were three initial investors of irrigation in southern Alberta, all of which were private companies, and by 1915, all suffered financial problems [3]. The Alberta Government then proceeded to assist collectives of farmers in buying out the private companies and form irrigation districts [3].

Brooks Aqueduct was designed by CPR engineers to carry water from Lake Newell Reservoir across an old river valley, 3.2 km wide and 20 m in depth, to enable the irrigation of 50,000 hectares of land east of Brooks [5]. The aqueduct was constructed from 25,000 yds³ (19114 m³) of concrete and 400,000 pounds of reinforcing steel. In addition to the aqueduct railway sidings, stores houses, a concrete reservoir, and a double-track standard gauge railway was constructed. The three-year construction programme, from 1912 to 1914, saw as many as 300 men employed during the peak summer construction periods. To accommodate the men a temporary camp was constructed close by [6].
From design to construction, this was an “innovative and courageous” project [5]. The design of the flume that carried the water was unique and based on a “hydrostatic catenary”; this is the natural geometric shape which a fle

xible material would take when suspended between two level supports and filled with water [7]. This suspended reinforced concrete structure was a leap into the unknown and based on untried engineering assumptions at the time. There were, however, some design flaws and use of faulty materials that led to considerable maintenance and repair programmes throughout the aqueducts 65 years of service [6]. One of those design flaws was the lack of consideration of fish present within the structure. This led to a stockpile of fish within the siphon, the place where the aqueduct goes beneath the railway. When the aqueduct was drained at the end of each season, the siphon was reported to be emptied of fish which were eagerly collected by the First Nation people of the area [6].

The aqueduct was eventually replaced by an earthfill canal in 1979; ownership of the structure passed to Alberta Environment on January 20th, 1981, with plans to demolish it soon after [8]. A last-minute reprieve spared the aqueduct when the site famously captured the heart and imagination of the federal Minister of Agriculture of the time, Eugene Whelan, who opposed its destruction. However, a section of the aqueduct was removed, in 1983, to allow the construction of Range Road 142. In 1988 the site was recognised for its engineering achievements and became a National Historic Civil Engineering Site [9]; it was not until 2000 that the aqueduct became listed as a Provincial Historic Site [7].

All historical images were sourced from the Eastern Irrigation District Archive and Capture 2 Preserve Team provided images of the recording process. 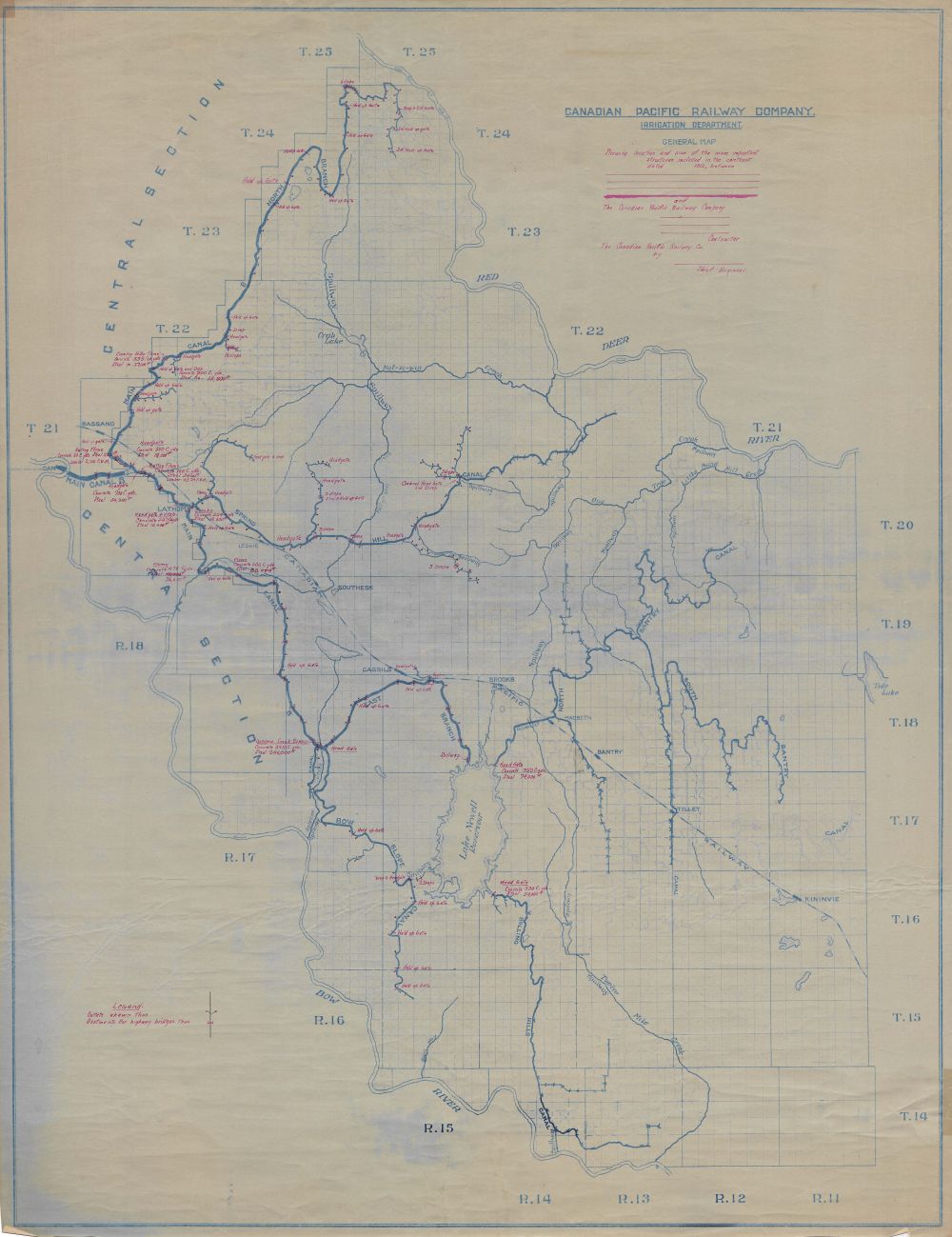 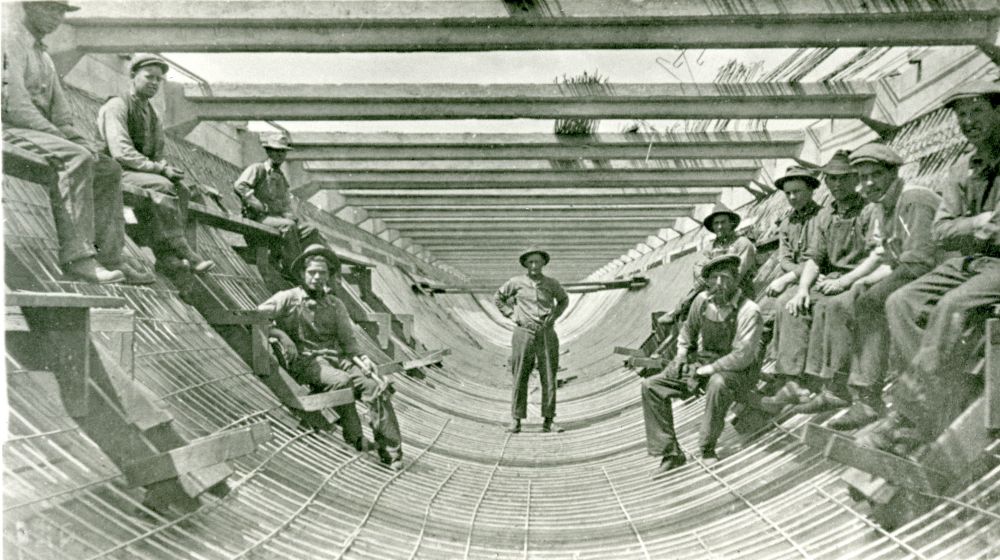 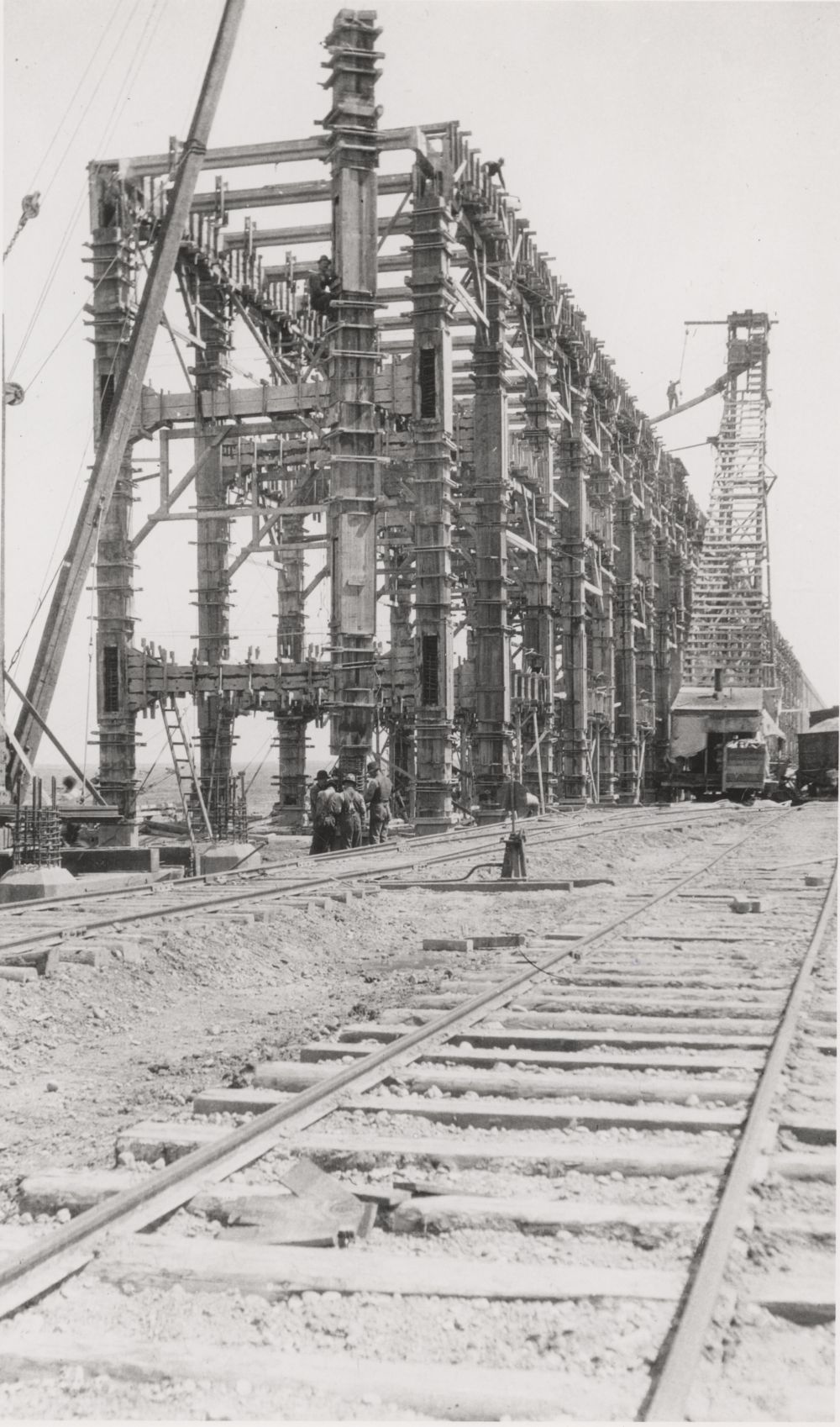 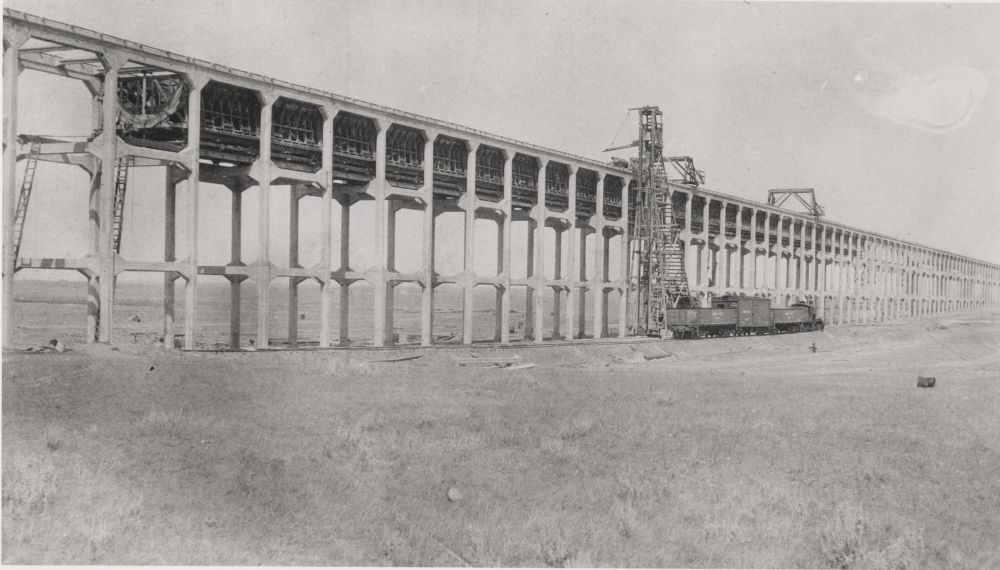 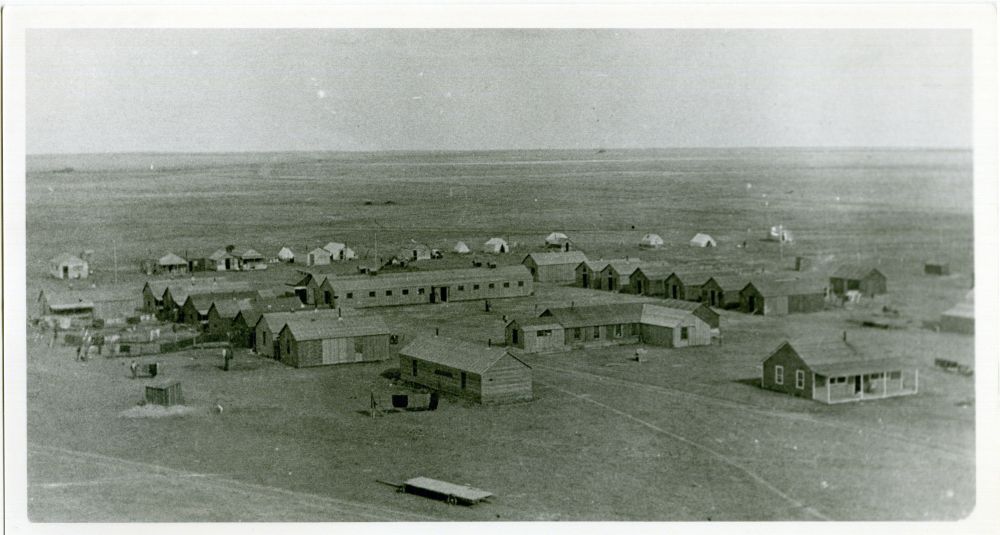 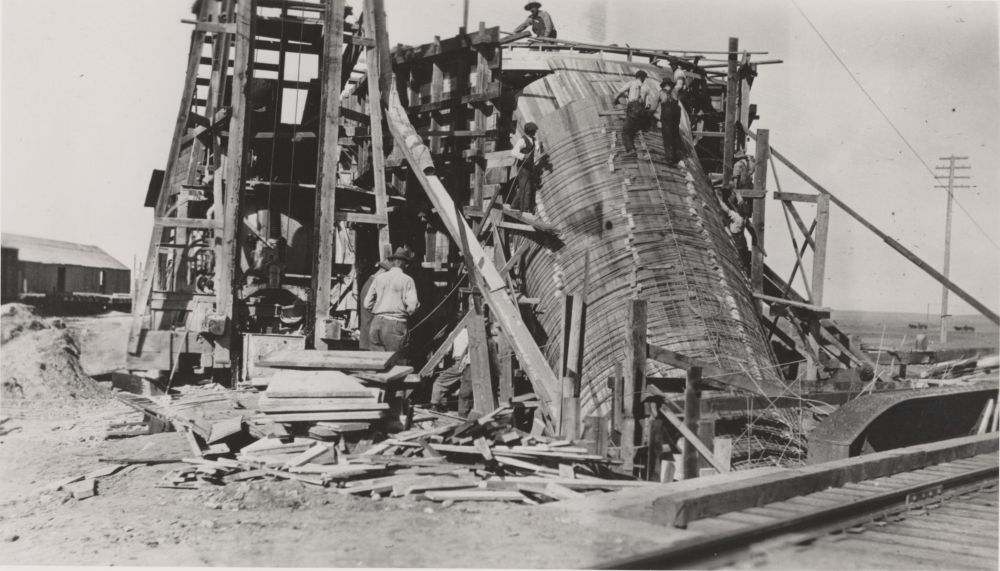 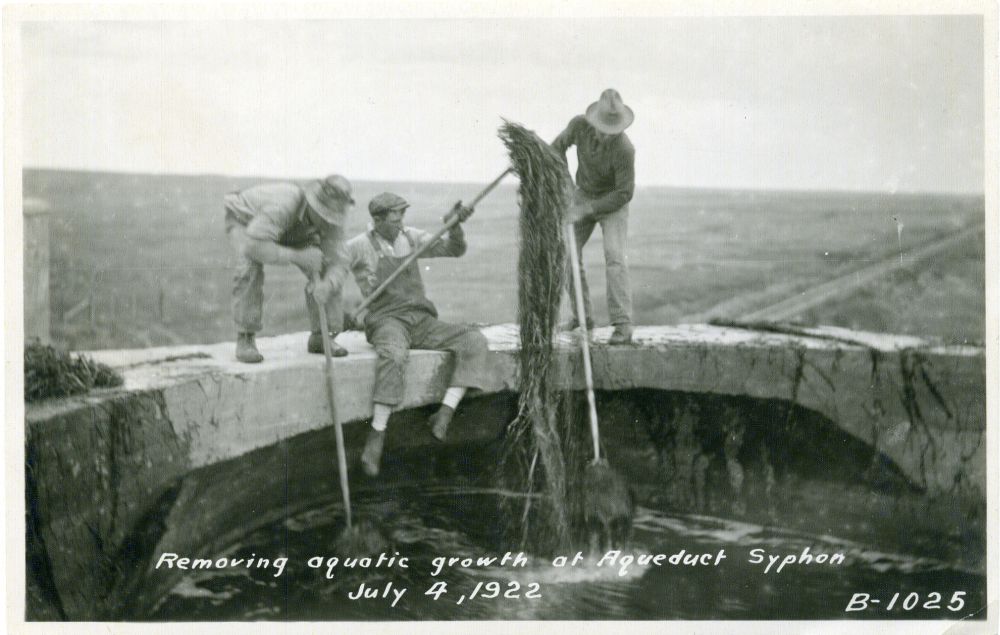 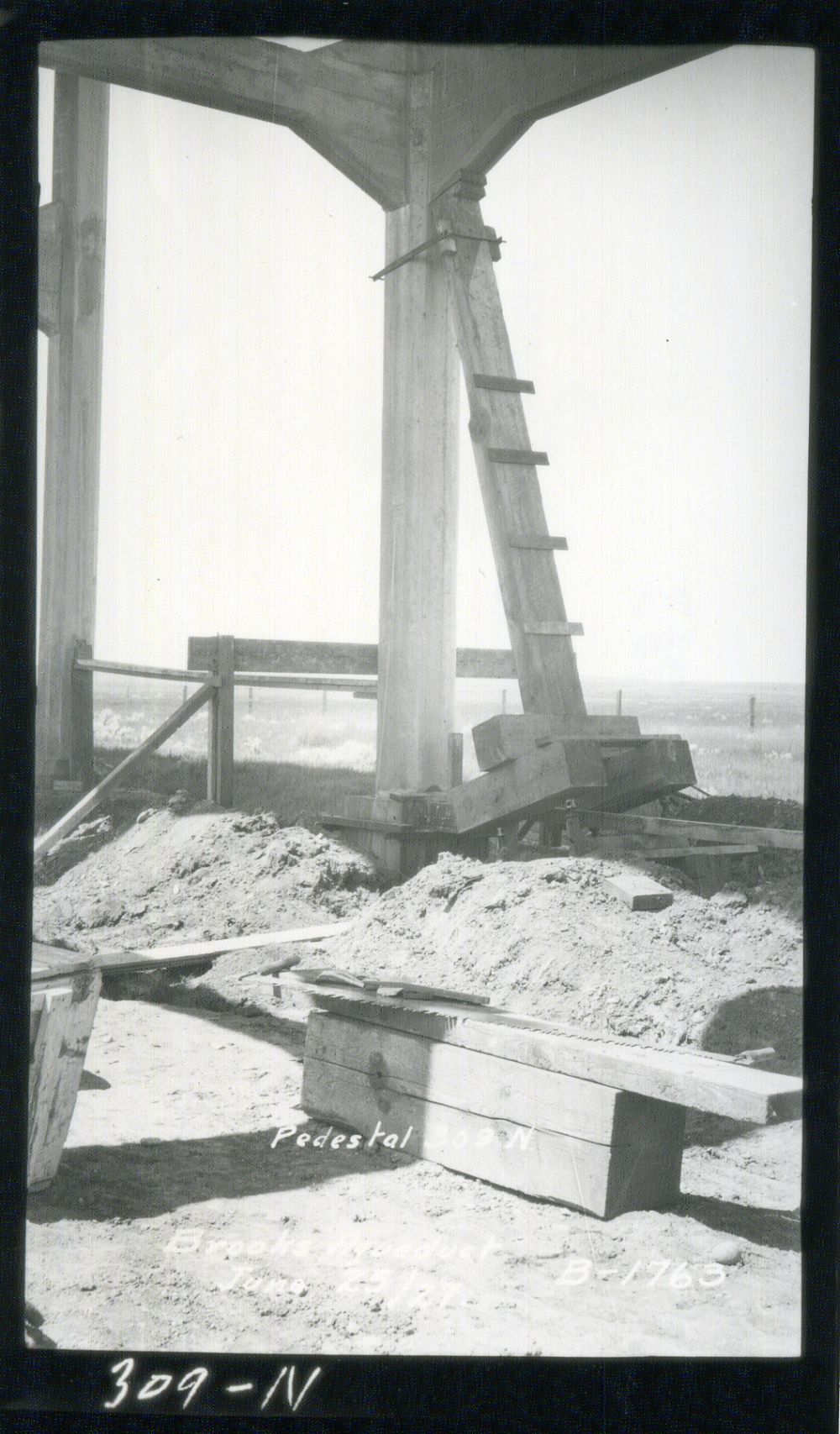 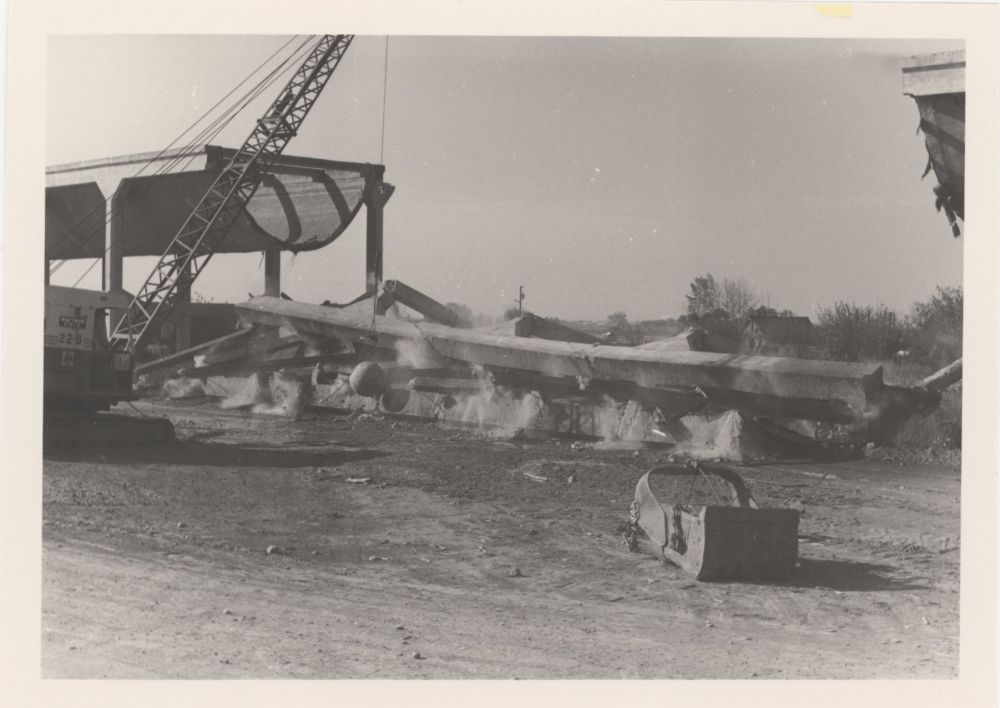 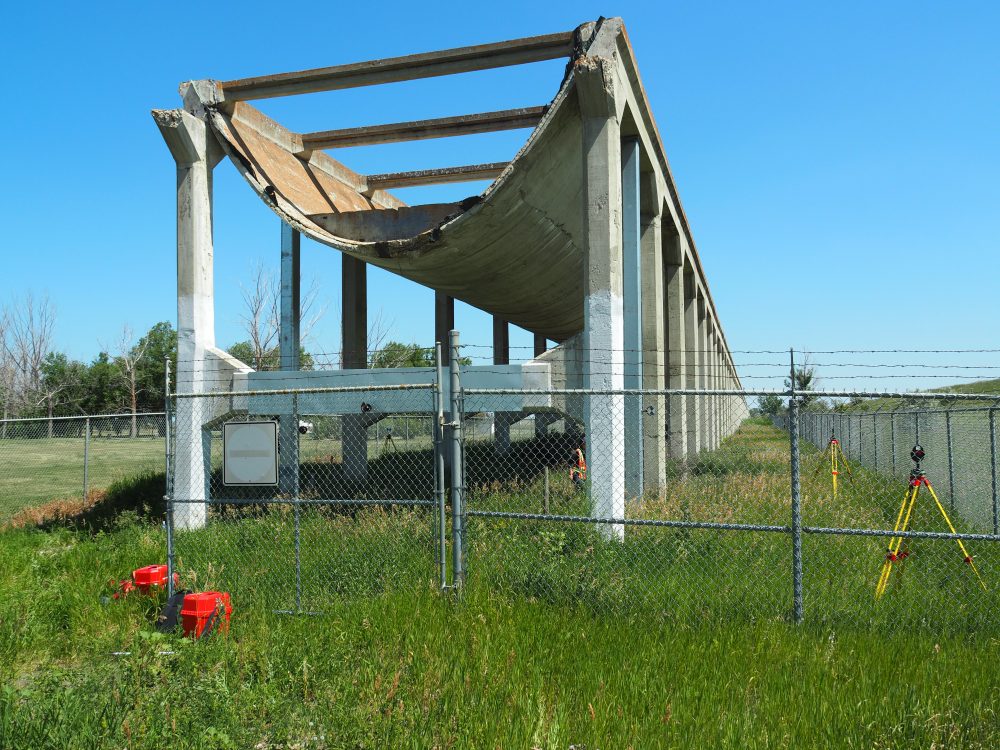 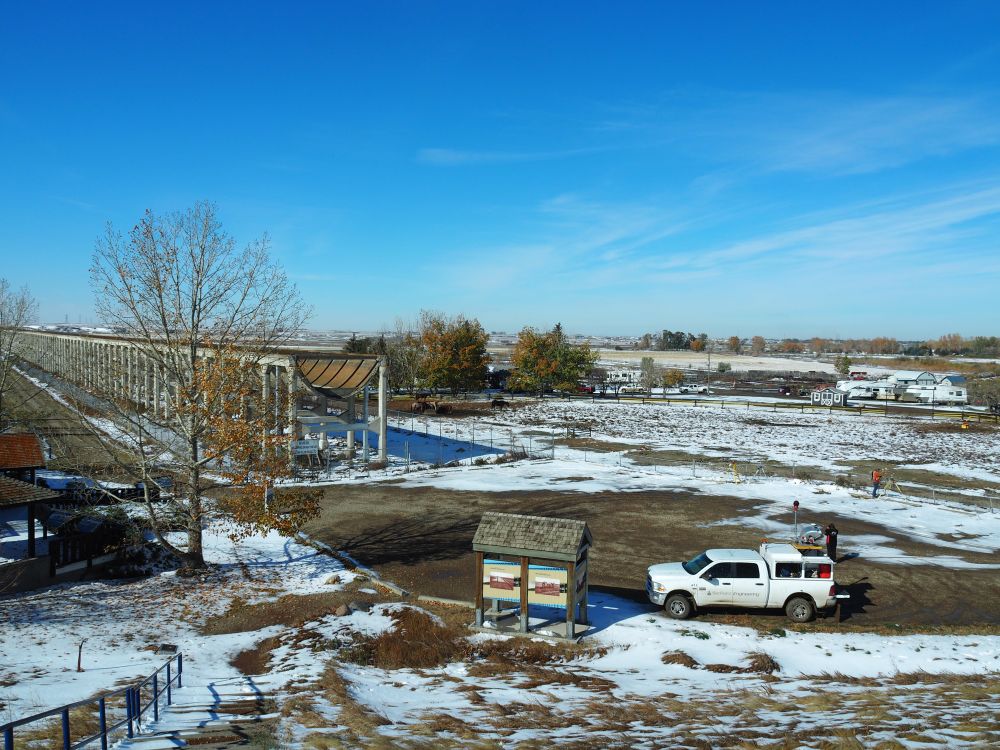 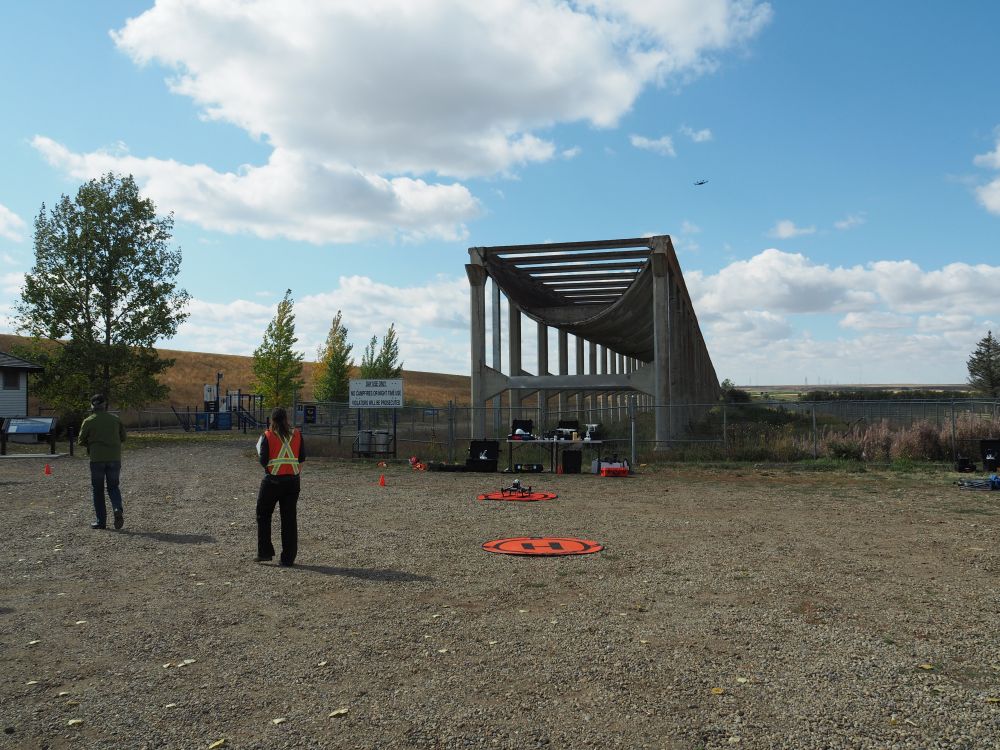 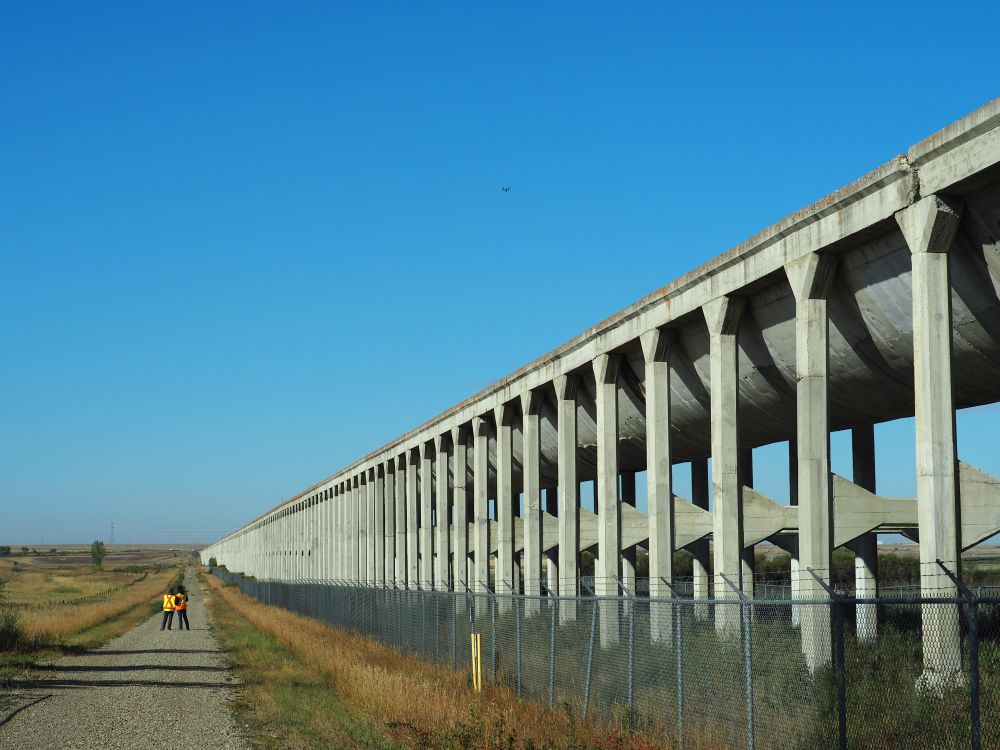 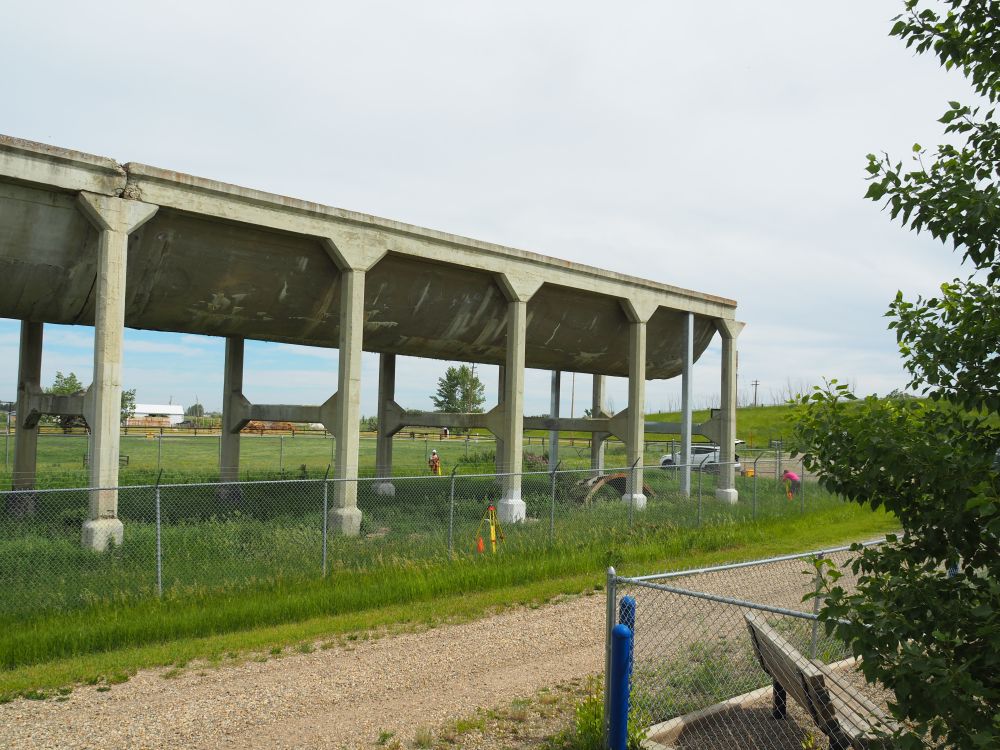 During its operating life, the Brooks Aqueduct has suffered from the effects of a series of design flaws. For example, the poor durability of the shell concrete, due to its high water-cement ratio and lack of air entrainment, has resulted in cracks that have transferred the tensile forces required to support the load to the steel bars used in the superstructure.

To what extent have the effects of time, combined with minimal maintenance and repair, compromised the structural integrity of the Brooks Aqueduct?

How effective have the interventions made by Alberta Culture and Tourism been in stabilizing and restoring the Brooks Aqueduct?

A multi-scale, multi-sensor campaign began during the summer of 2017 to acquire a baseline three-dimensional (3D) dataset of the Brooks Aqueduct. Two complementary geomatics technologies were used:

The terrestrial lidar data captured by the HDS 6100 and Riegl ZMX450 will be used as baseline information for identifying and tracking damage to the aqueduct in the years to come. The east and west ends of the aqueduct will be scanned annually and compared with earlier scans to search for new damage, as well a structural changes.

A Building Information Model (BIM) for the Brooks Aqueduct has been created for recording and tracking damage to the structure. The BIM consists of a Cloud Database and Mobile App. An operator using the App can record and georeference any damage they identify to a virtual schematic of the structure. This information is then uploaded to the Cloud Database. The Brooks Aqueduct BIM will allow Alberta Culture operatives to accurately record new damage, as well as search the database for previously reported damage. 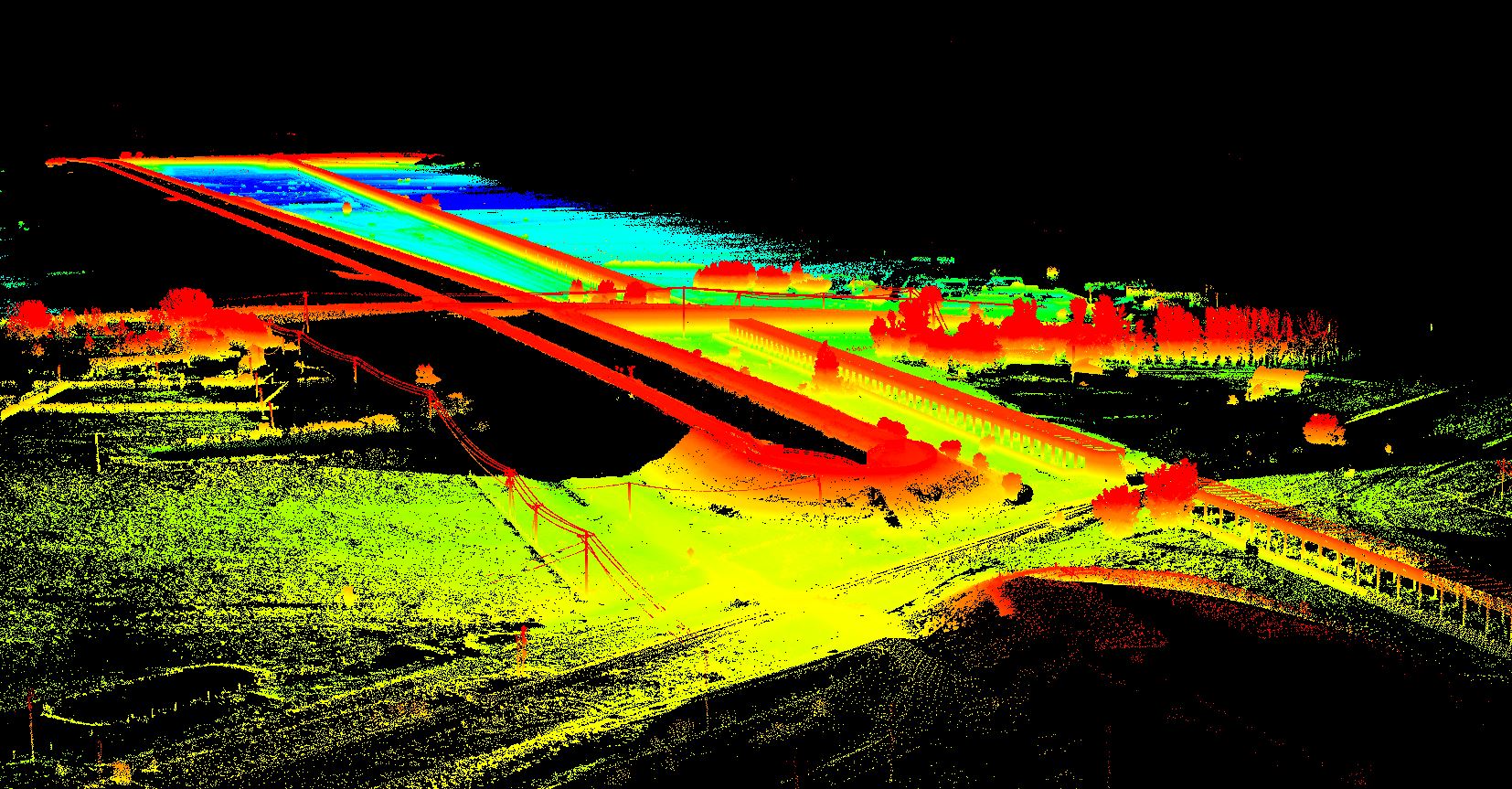 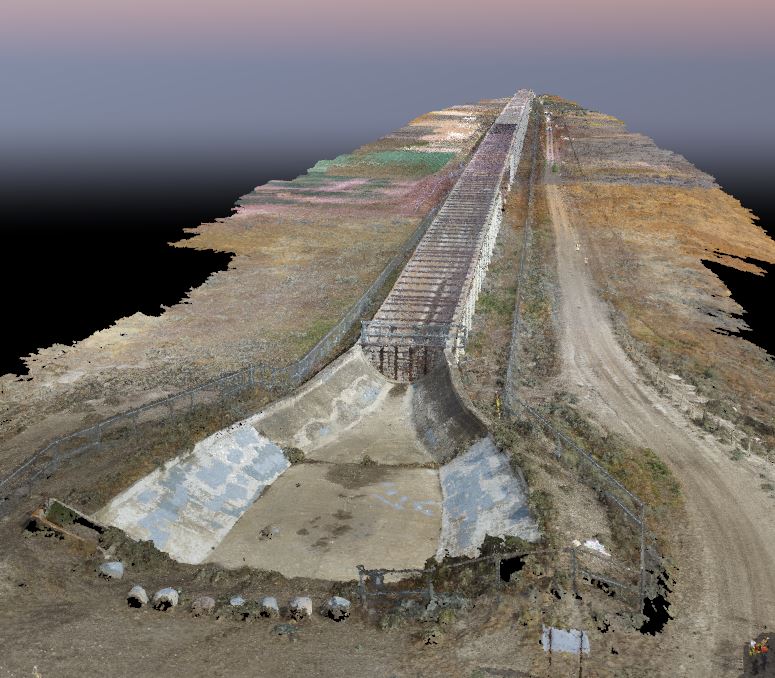 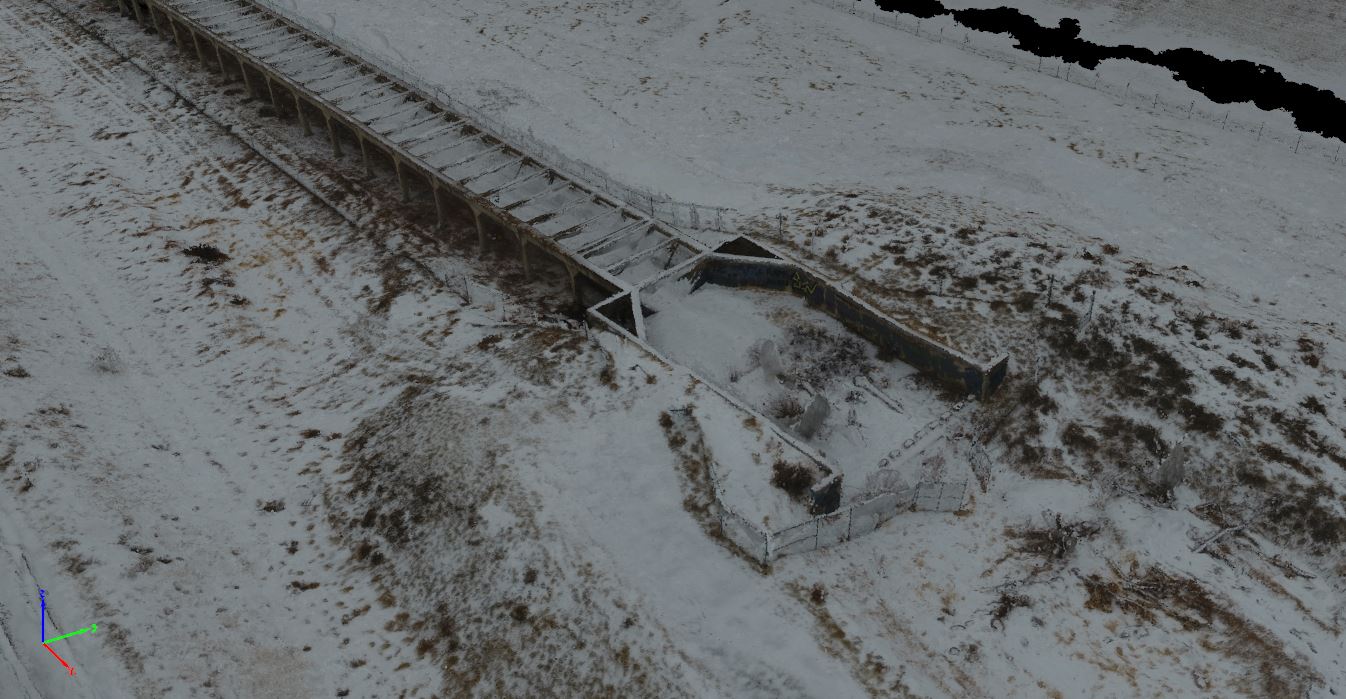 The raw data files for this project are available for download from the archive repository. Point Clouds are .las file format. Please download the metadata template to access metadata associated with each file. All data is published under the Attribution-Non-Commercial Creatives Common License CC BY-NC 4.0 and we would ask that you acknowledge this repository in any research that results from the use of these data sets.