This cabin is on the site of the McDougall Historical Church and situated to the southwest of the church building. The date of its original construction is unknown. In 1957 it was moved to its current location from the Sarcee Nation Indian Agency on the Tsuu T’Ina reserve southwest of Calgary [1]. The cabin was brought in after the church was renovated and re-purposed as a historical site to be a residence for Walking Buffalo, a Stoney Elder who had lifelong ties to the McDougall Mission [2]. Rather than a rendered 3D model, this is the registered point cloud captured by the Z+F scanner. Please Note: This is a large file and may take a few minutes to load.

The cabin was painted and updated to match the renovations on the McDougall Historical Church that had been done in the 1950s, but it retains many of the original features.  It is a one-storey rectangular building constructed from round logs.  It has a gabled roof with eaves that overhang the porch at the front of the house.  The roof is covered with cedar shakes and the windows are wooden framed.  Inside, the floor is wood and there is a wood-burning stove [1].

The Caretaker’s cabin was not affected by the fire that severely damaged the McDougall Memorial United Church on May 22, 2017.  The cabin is architecturally significant because of its original rounded log construction with saddle notched corners, the ribbon assembly wooden-sash windows, the central door and exterior wooden screen door, and the original wood flooring [1]. It is culturally significant because of its association with the McDougall Mission and the relationship with the Stoney People in the area, especially Walking Buffalo.

Walking Buffalo, also known as Tatanga Mani or George McLean, was born in March 1871 near Morley, Alberta.  His mother died shortly after he was born and he spent time in the care of his grandmothers, being raised in a traditional Stoney life.  When he was six years old, he attended the signing of Treaty 7 at Blackfoot Crossing in 1877. At the age of eight, he was adopted by Reverend John McLean [2].  He was educated first at the McDougall Orphanage School on the Morley McDougall Mission, and later at the Red Deer Residential Indian Industrial School and St. John’s School in Winnipeg.  As a young man, he worked as a blacksmith and as scout and interpreter for the NWMP [2].

Walking Buffalo later returned to Morley at the insistence of his uncle, Chief Jacob Bearspaw, who wanted him to use his education to help the Stoney people as an advisor and interpreter.  He served as a councillor of the Bearspaw Band of the Stoney Indians from 1907 to 1912 and was Chief from 1912 to 1916 [2]. Throughout all this he continued to be a leader in the Morley McDougal Church and Mission, as well as an active member of the Indian Association of Alberta where he was an advocate for his people to uphold their treaty rights [3]. In 1959, when he was 88 years old, Walking Buffalo embarked on a world mission sponsored by a group known as the International Moral Re-armament.  He travelled 62,000 miles around the world, promoting peace, indigenous rights and environmental conservation [3]. Walking Buffalo died in Banff, Alberta on December 26, 1967 [4]. 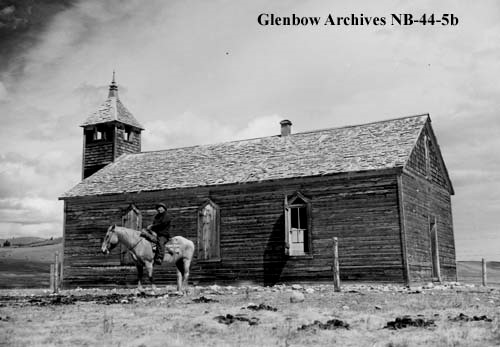 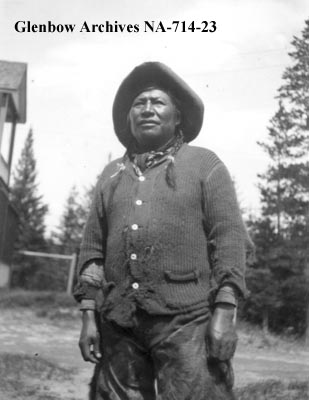 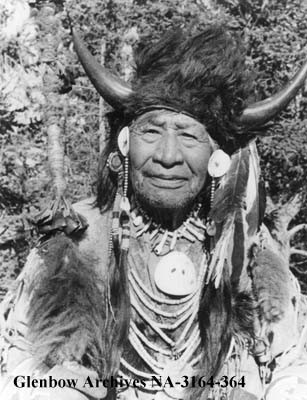 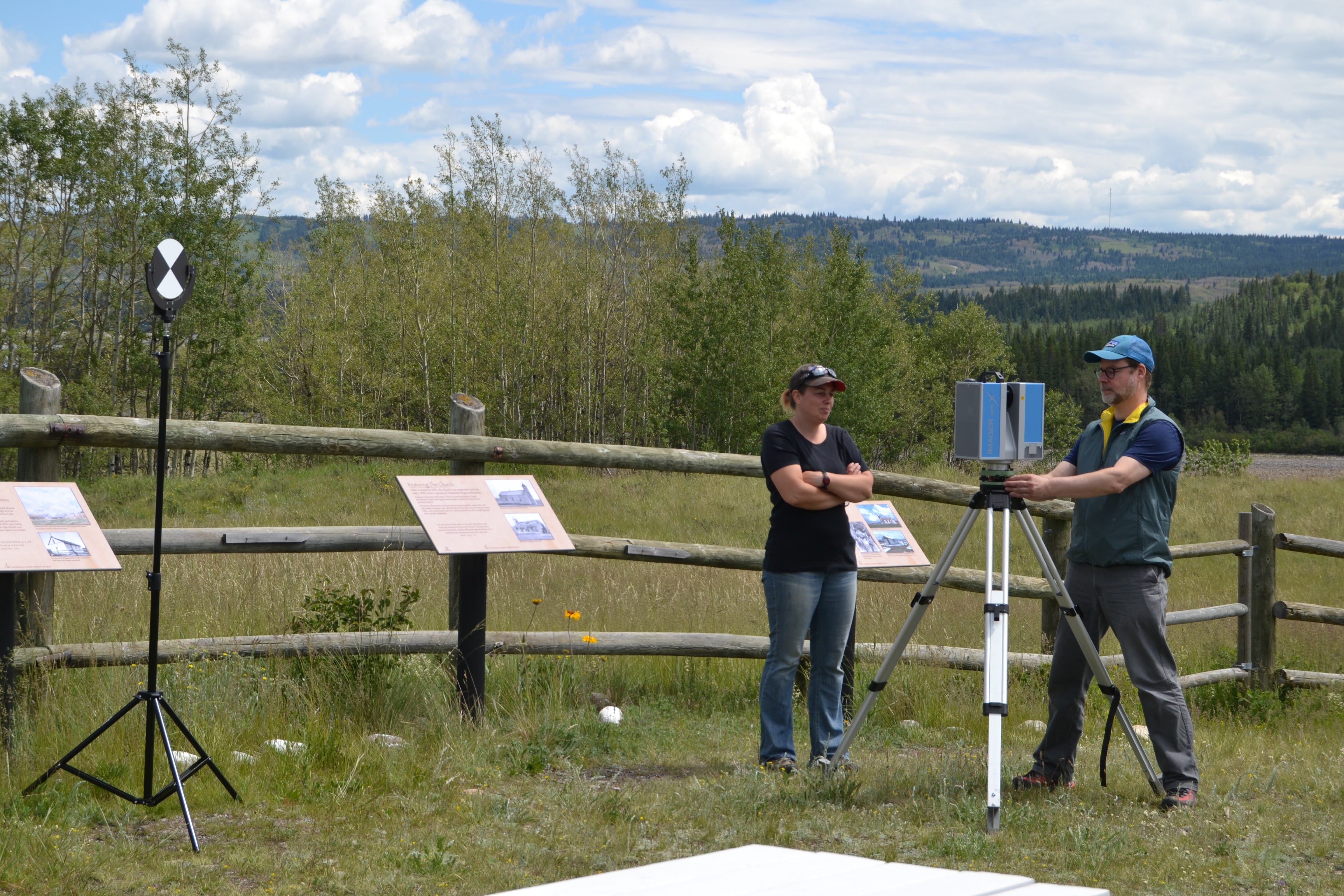 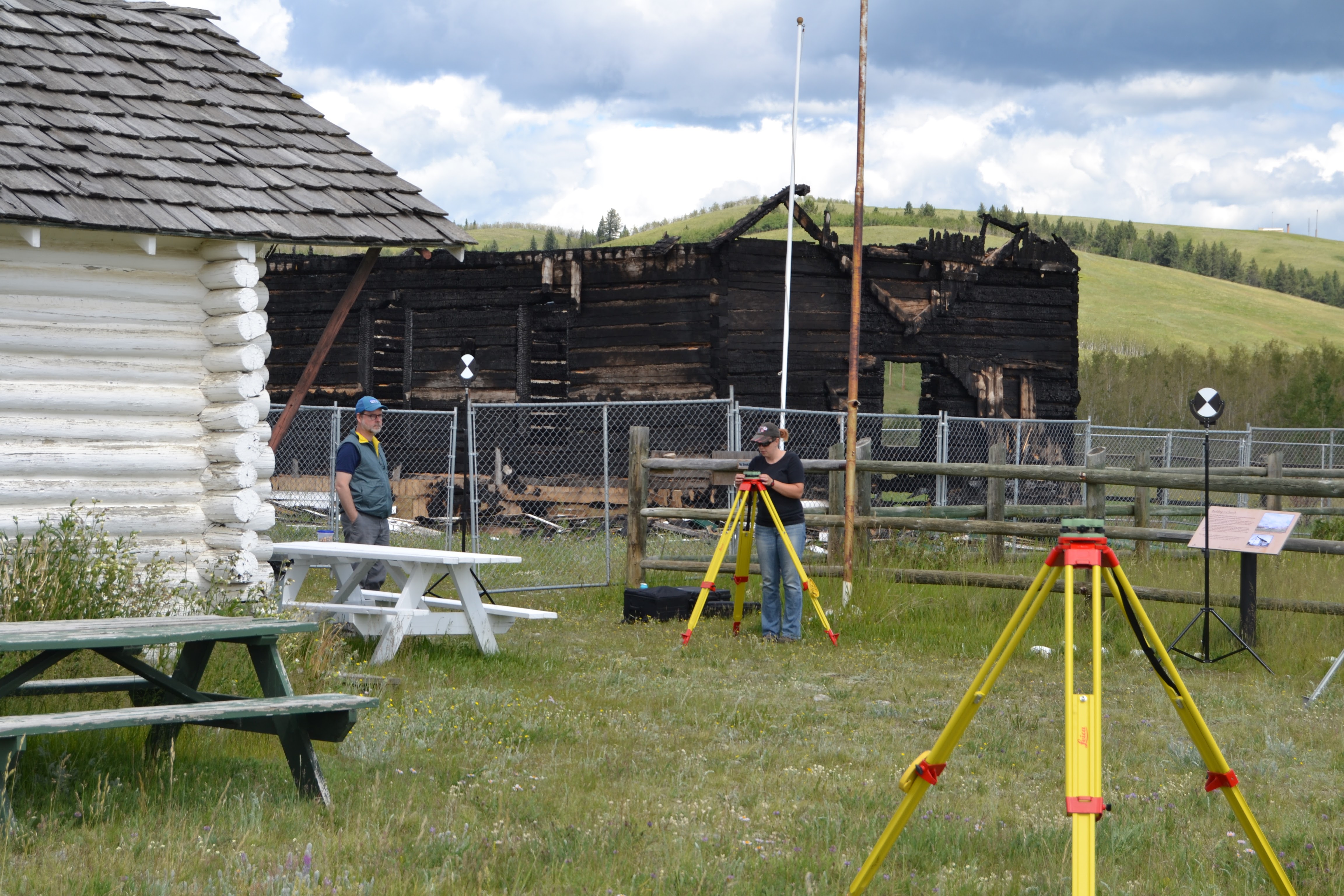 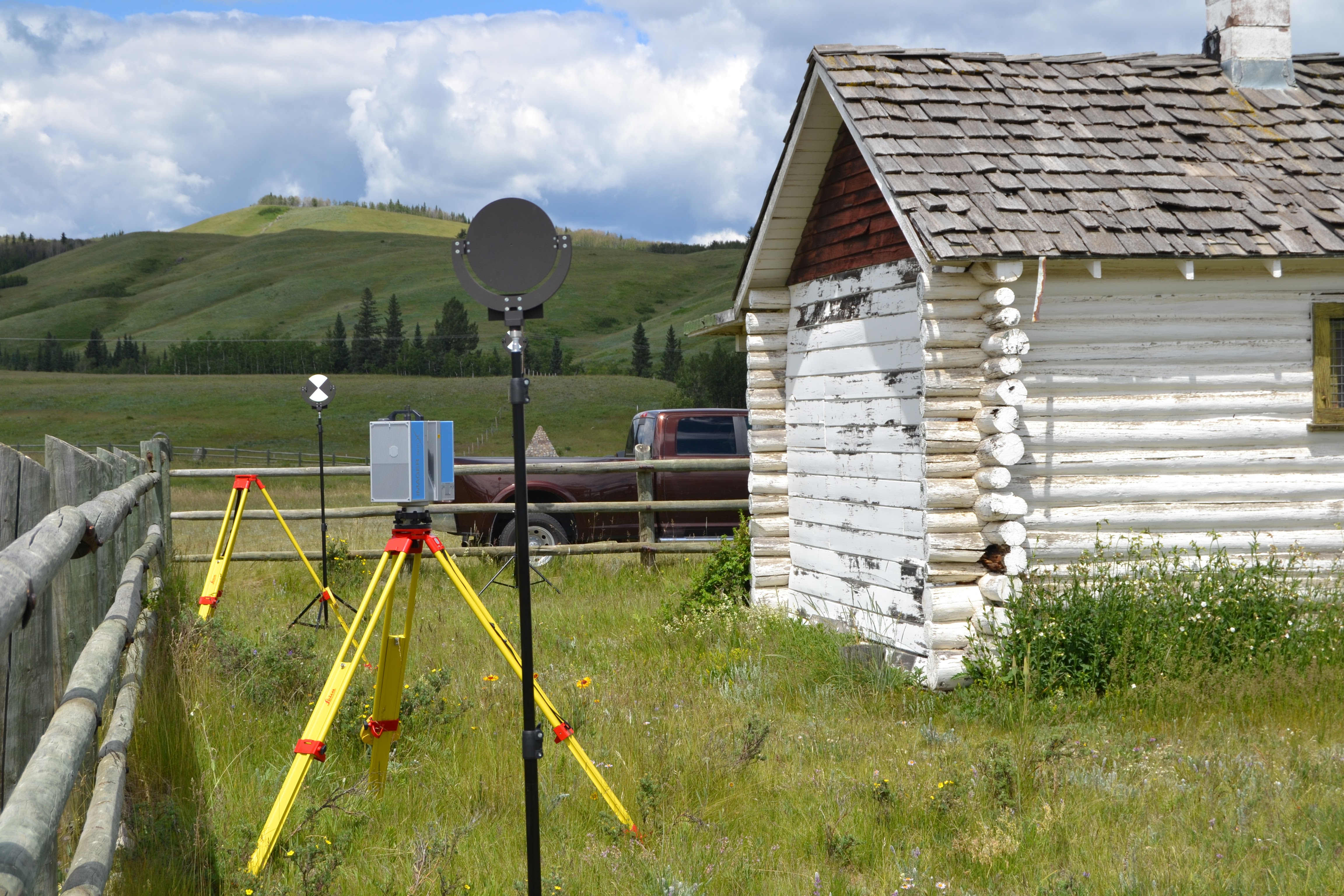 There were two approaches used to capture the caretaker’s cabin for documentation purposes. Terrestrial laser scanning employed the Z+F 5010X scanner at ten locations, eight external and two internal. Six paddle targets were strategically placed around the exterior of the cabin, such that no less than three were visible from each scanning location. The scans were registered using Z+F Laser Control software, and then exported into AutoDesk ReCap for further processing. The resulting point cloud was imported into AutoDesk ReMake to create a 3D model of the building.

The DJI drone was flown in an overlapping grid over the church at an altitude of 20 meters, such that the images captured by the onboard camera overlapped by 90%. The resulting images were processed using Pix4D mapper software, creating a point cloud, 3D model, DSM, and orthomosaic of the site. 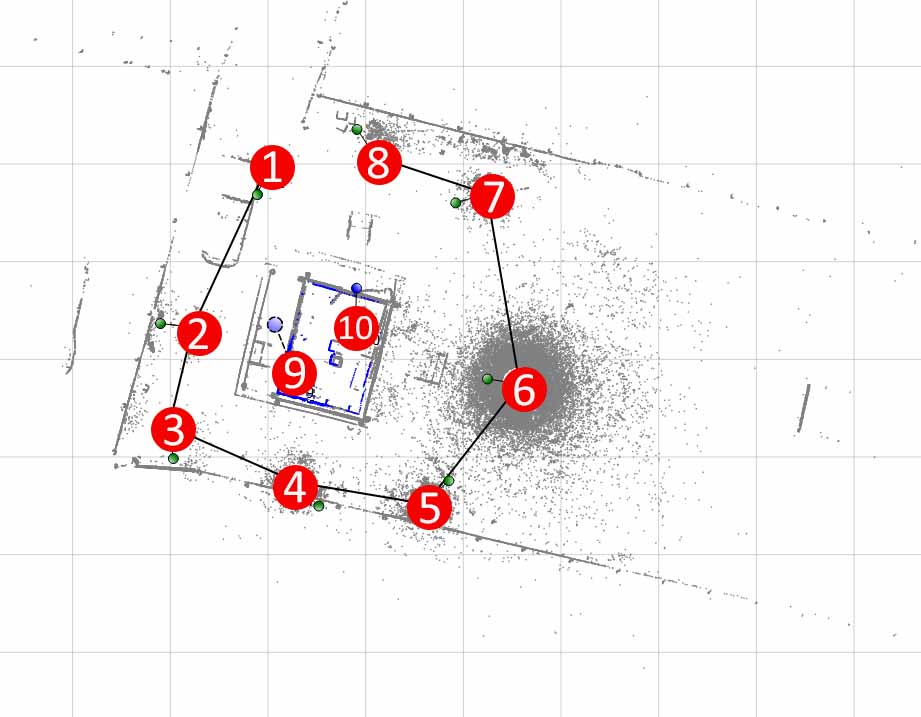 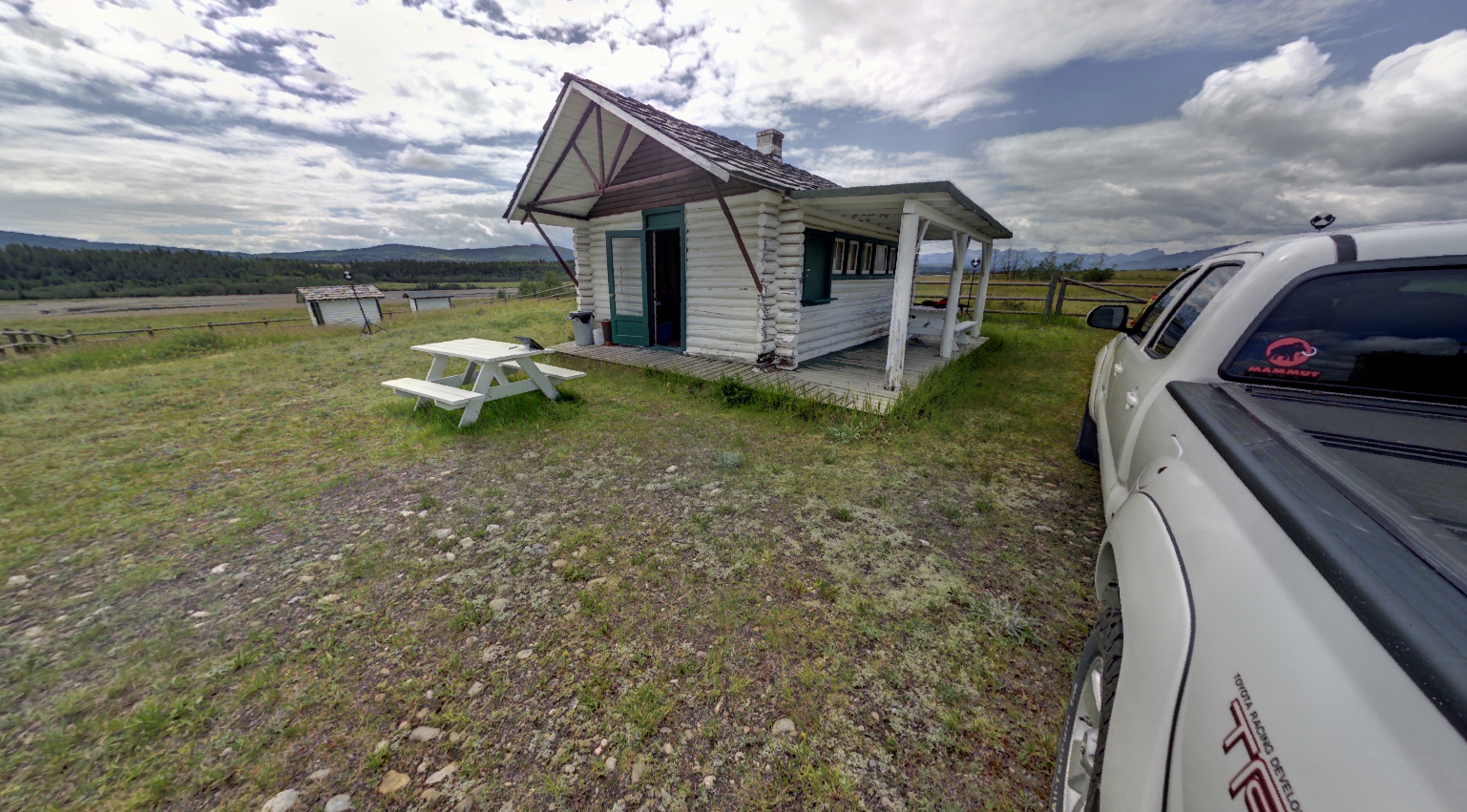 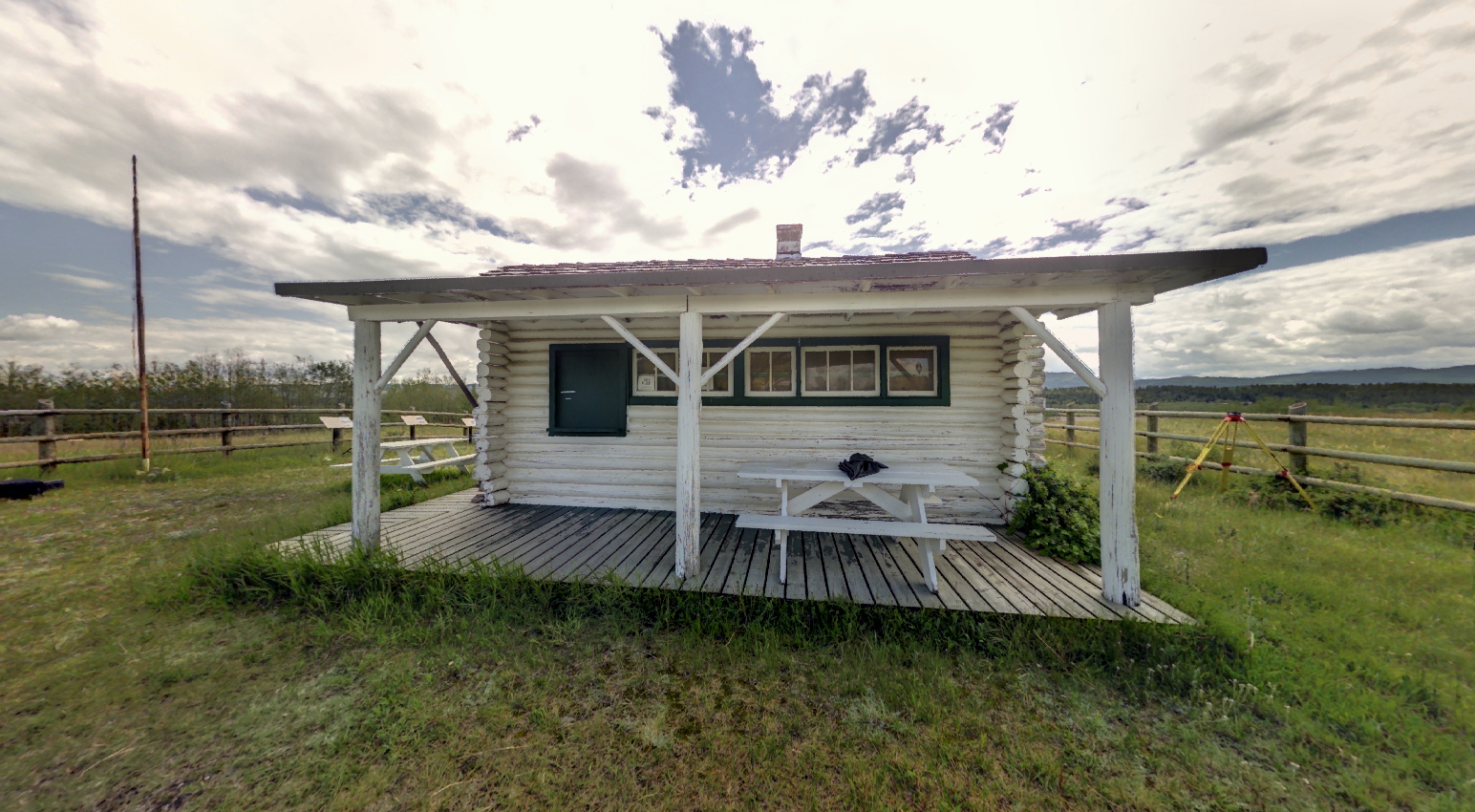 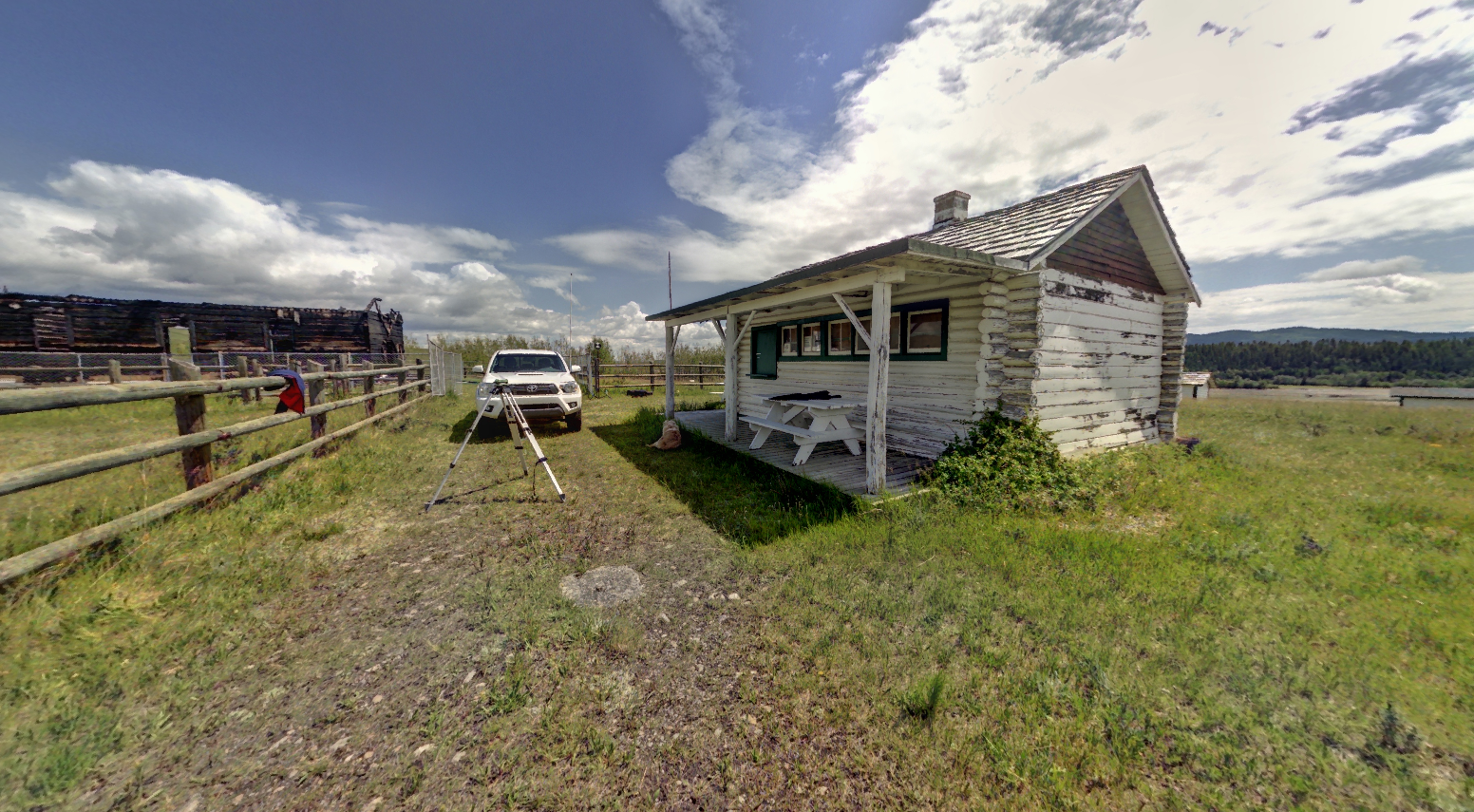 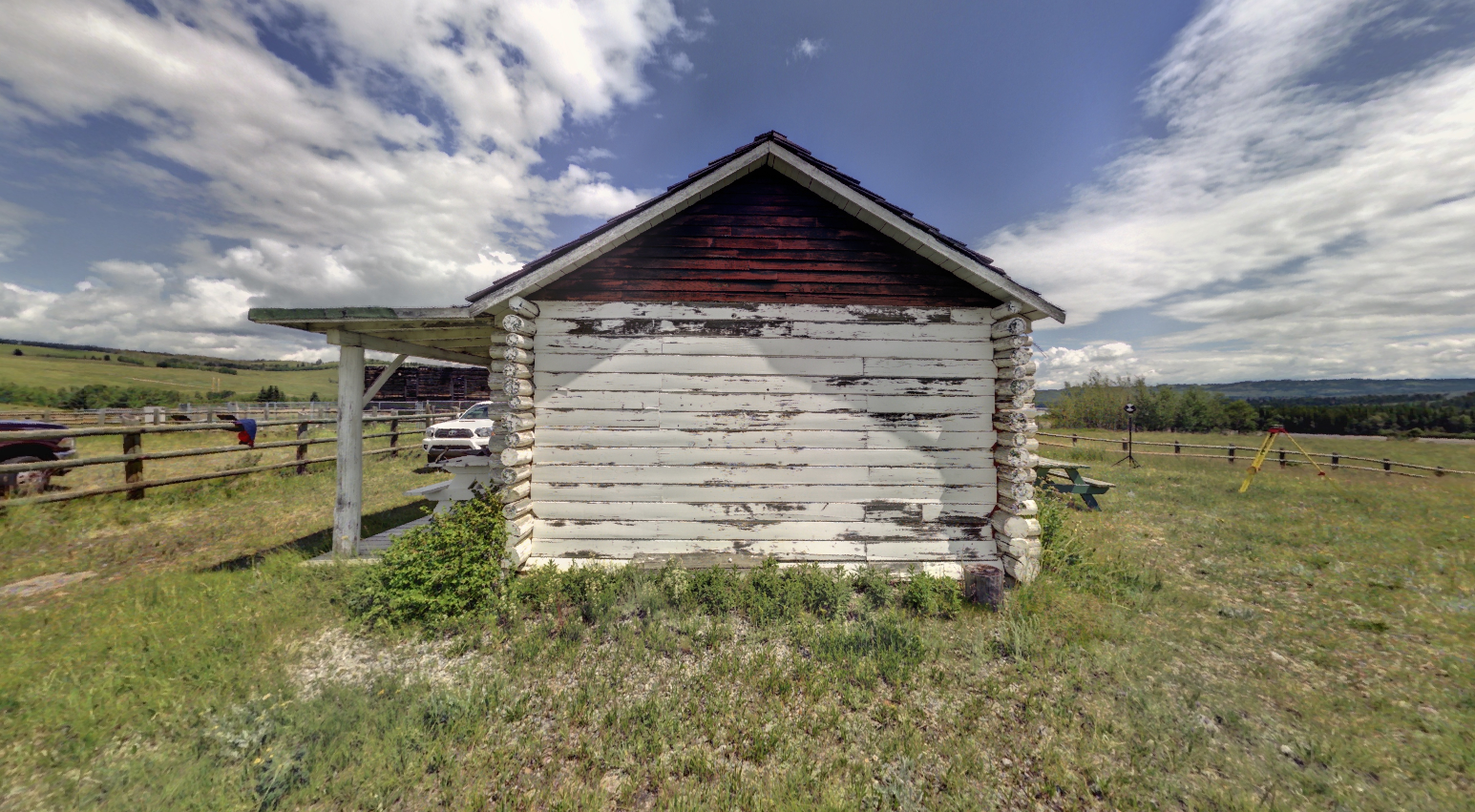 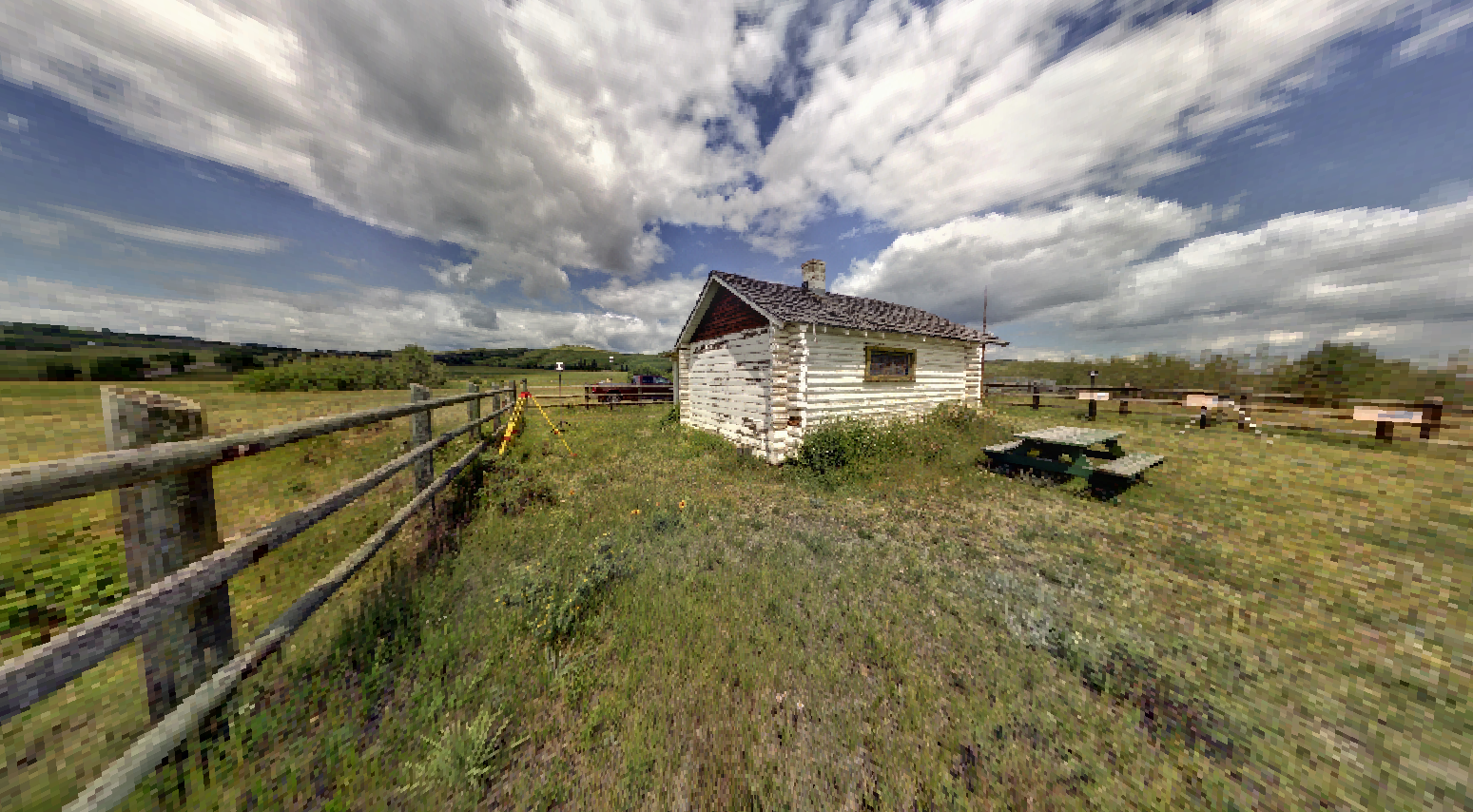 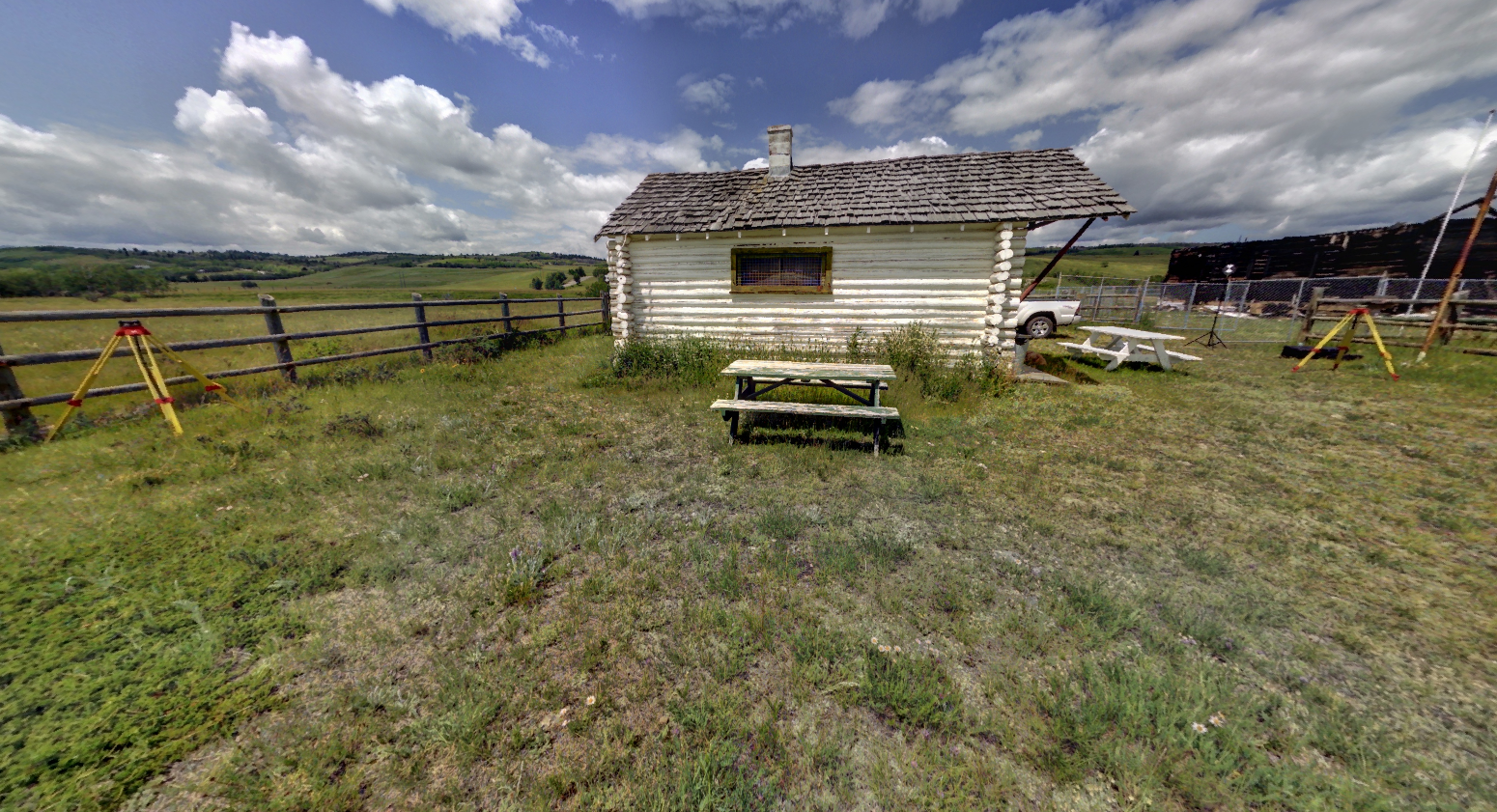 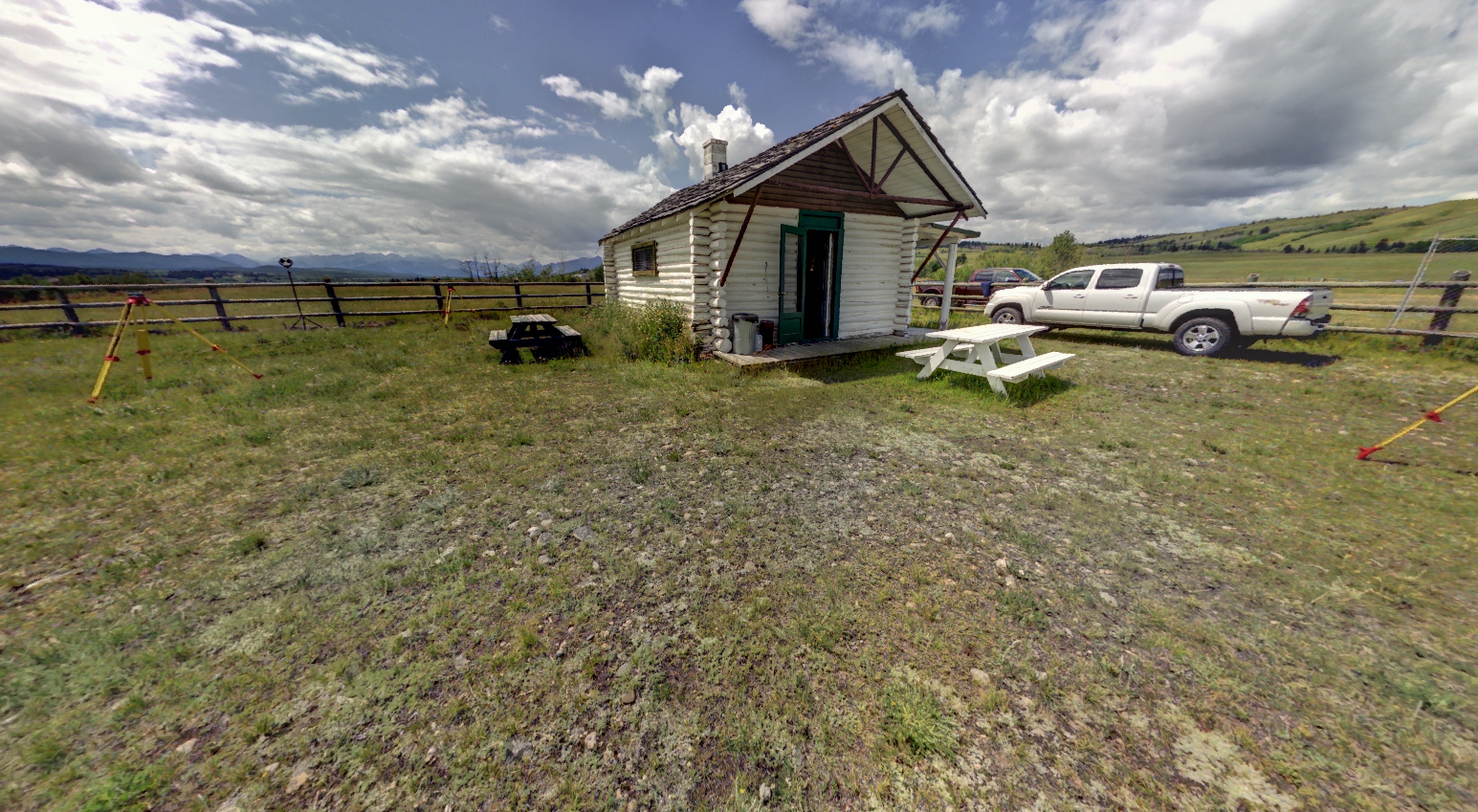 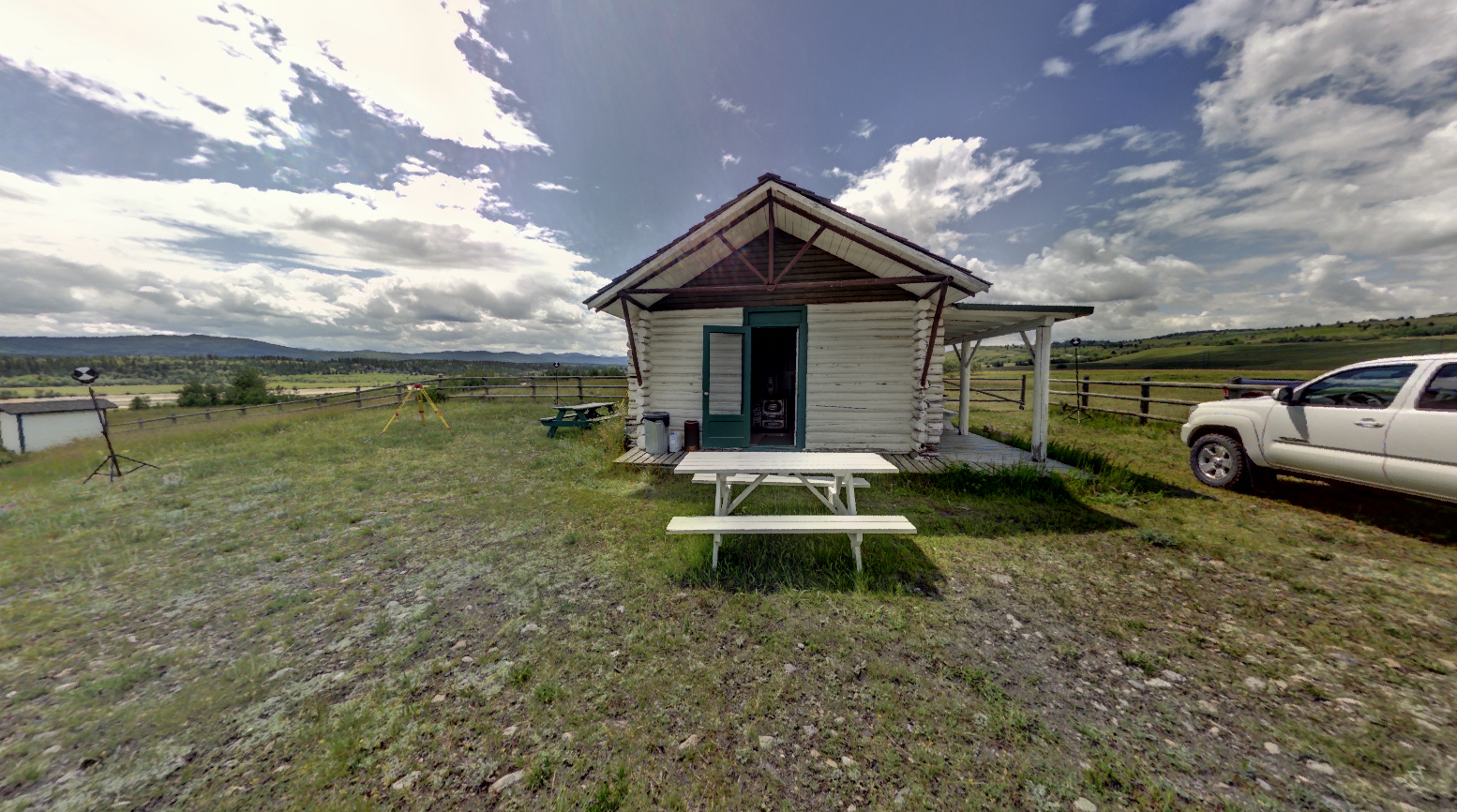