At 4:10AM April 29th, 1903 the town of Frank was buried in what is one of largest landslides in Canadian history. Around 44 million cubic metres of of limestone dislodged from Turtle Mountain, covering the eastern edge of Frank, the railroad, and the coal mines. Between 70 to 90 of the town’s residents were killed in the accident, making it the deadliest slide ever seen in Canada. Today, the town of Frank has been absorbed into the Municipality of Crowsnest Pass, and the sight of the slide remains open and preserved as a Provincial Historic Site and receives over 1,000 visitors annually.

The Town of Frank

In the early 1900s, many coal mining towns were established throughout the Crowsnest Pass region of the Northwest Territories, which would later become the provinces of Alberta and Saskatchewan.

One of the first of these coal mines was developed by American entrepreneurs Sam Gebo and Henry Frank [1]. Located at the base of Turtle Mountain the town of Frank sprang up to support the mine with its first buildings being constructed on an area of flat land between the mine at the base of the mountain and the Canadian Pacific Railway (CPR) line that ran through the pass [1].

The town’s grand opening happened on September 10, 1901. Presided over by Henry Frank, the celebration was an all-day event which included sporting competitions, tours of the coal mine, a banquet, and a dance [1]. Two special train cars were brought in to support this event. One was to bring in gourmet food for the day and the banquet, including a substantial amount of ice cream. The second car was to bring in the guests, which included the first premier of the Northwest Territories, Frederick W. A. G. Haultain and his public works minister [1].

Frank was the first incorporated town in the Crowsnest Pass and by 1903 served over 1000 people. The town included two dozen businesses and services, a two-story brick school, and a regional post office [1].

The Frank Slide is the deadliest and largest in Canadian history. It occurred on April 29th, 1903 at 4:10AM [1,2]. The block of rock that fell from the east face of Turtle Mountain was estimated to be over one kilometre wide and fell at speeds over 70 kilometres per hour. Overall, more than 44 million cubic metres of limestone fell and left rockfall covering an area of three-square kilometres on the valley floor [1,2].

Contrary to popular belief, the town of Frank was not actually situated in the path of the rockfall. However, several buildings on the outskirts of town were and the slide destroyed seven houses, a ranch, some commercial buildings, all surface operations of the coal mine, and about 2km of the CPR line [1]. Of the 600 people living in Frank at the time, approximately 100 of these were in the path of the slide. It is estimated that about 90 people were killed, but because the bodies could not be recovered from under 45 metres of rock, the exact number will never be known [2]. An additional 23 people were living in the buildings destroyed by the slide and survived, while 17 miners were trapped inside the mine from the rockfall and had to dig themselves out [2].

The slide’s primary cause was the unstable geology of Turtle Mountain. Referred to as “the mountain that moves” by Indigenous Blackfoot and Kuetani peoples, scientists say that Turtle Mountain was inevitably going to slide, and it was just a matter of when [2].

Further analysis by geologists indicated that the coal mine at the base of the mountain contributed to its instability, and perhaps speed up the processes that lead to the slide. However, this was still a secondary contributing factor and the primary cause of the slide was the natural geology of the mountain and the disaster would have eventually happened with or without the mining operations below [2].

When the slide happened, Frank was evacuated but residents were allowed to return shortly after and within a month both the mine and railway were both back in full operation. Some residents moved away, but the town continued to grow [1,2]. As the population expanded, there was no room for the town to develop in its original location and “New Frank” took root to the northwest across the CPR tracks [2].

The geological stability of Turtle Mountain remained under scrutiny, however. In 1911, a Royal Commission of scientists determined that the north peak of Turtle Mountain was unstable and a threat to the townsite below. The provincial government decided that to be safe, all of the remaining buildings from “Old Frank” should be relocated to the site of “New Frank,” which was far enough away from the mountain to be safer. All of the original buildings from Frank were relocated and some were moved to other towns in the Crowsnest Pass, while the Imperial Hotel was relocated all the way to Vulcan, Alberta [2].

In more recent years, Turtle Mountain has continued to be monitored and studied by geologists; it has been determined that the north peak is unlikely to produce a landslide of any significant volume.

Today, Frank is a quiet residential community of about 200 people, and is part of the larger Crowsnest Pass municipality. In 1977 the Frank Slide was designated as a Provincial Heritage Site, and on April 28th, 1985 the Frank Slide Interpretive Centre was opened [1].

This site receives over 1,000 visitors annually. Turtle Mountain continues to be monitored by geologists and it is likely that it will be the site of more major rockslides in the future [2].

All historical images were sourced from the Glenbow Archives. Modern images have been sourced from Atlas Obscura, Wikipedia, Frank Slide Interpretive Centre, and Alberta Southwest. 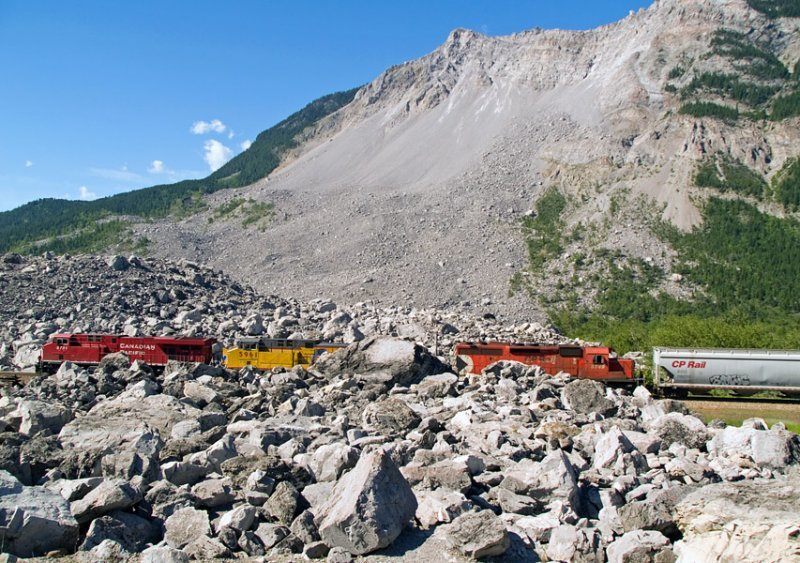 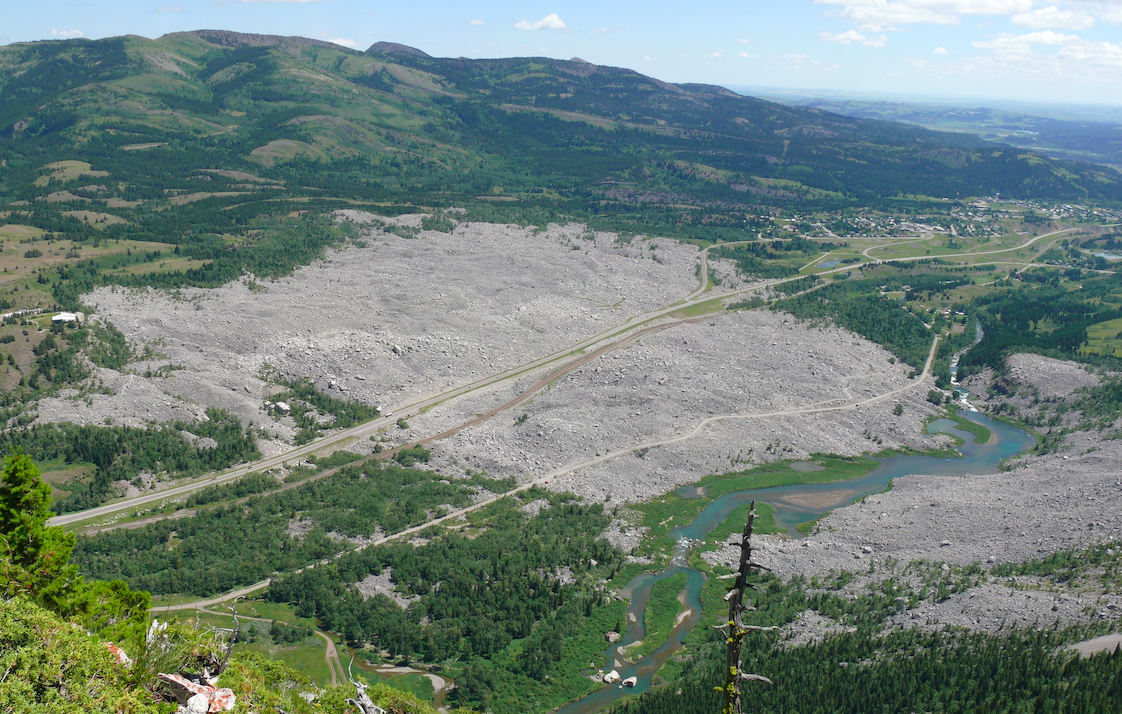 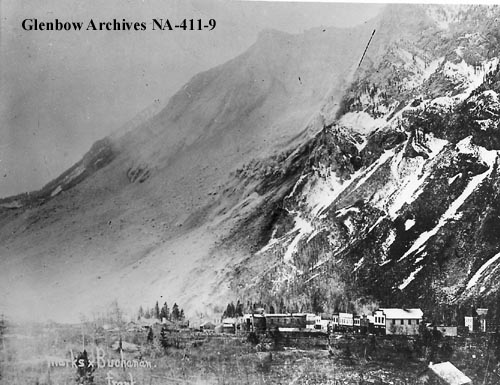 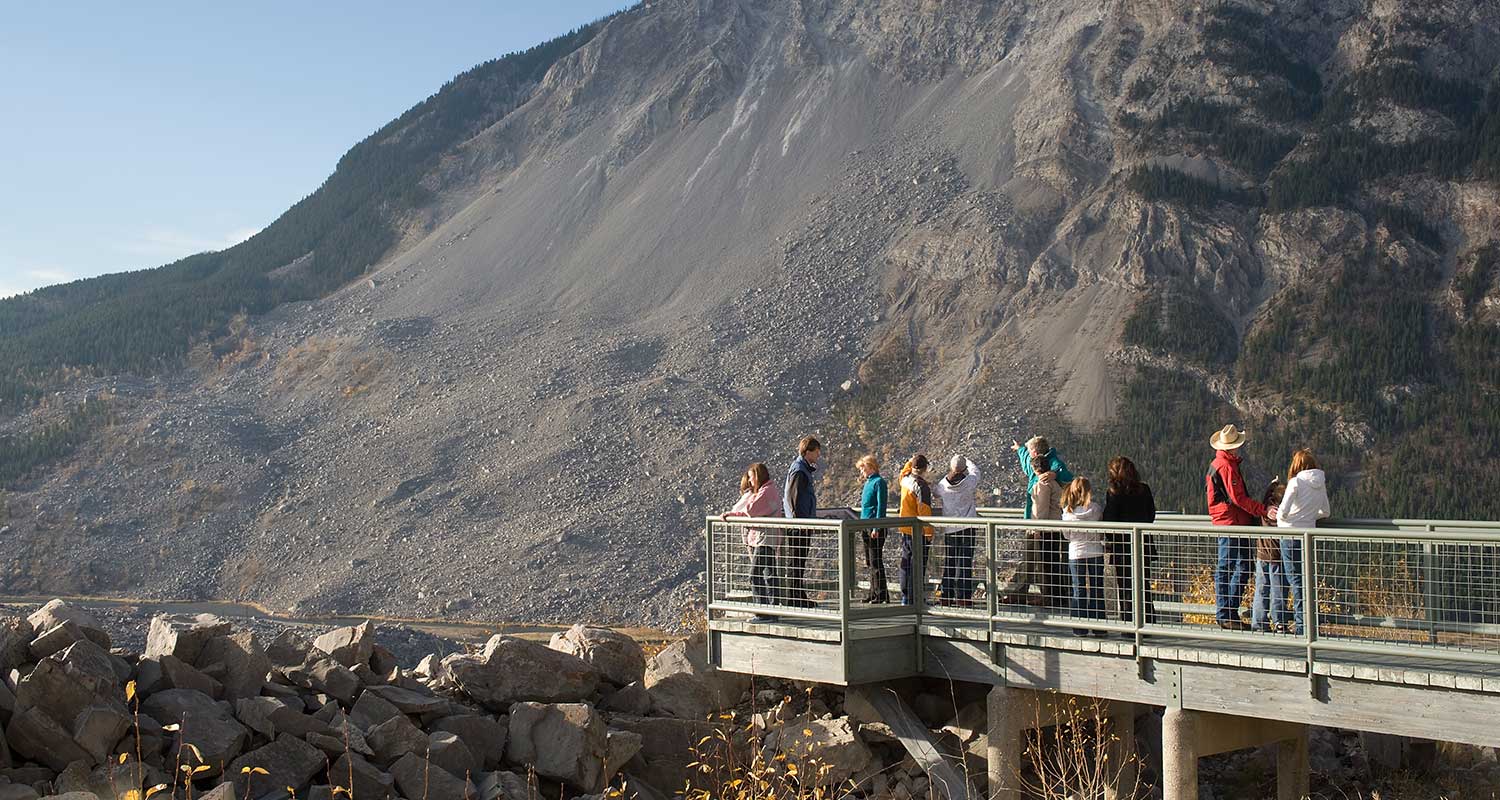 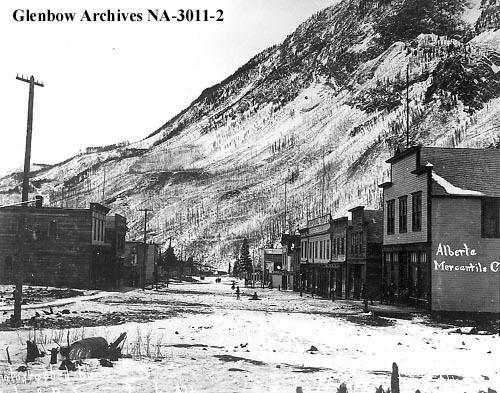 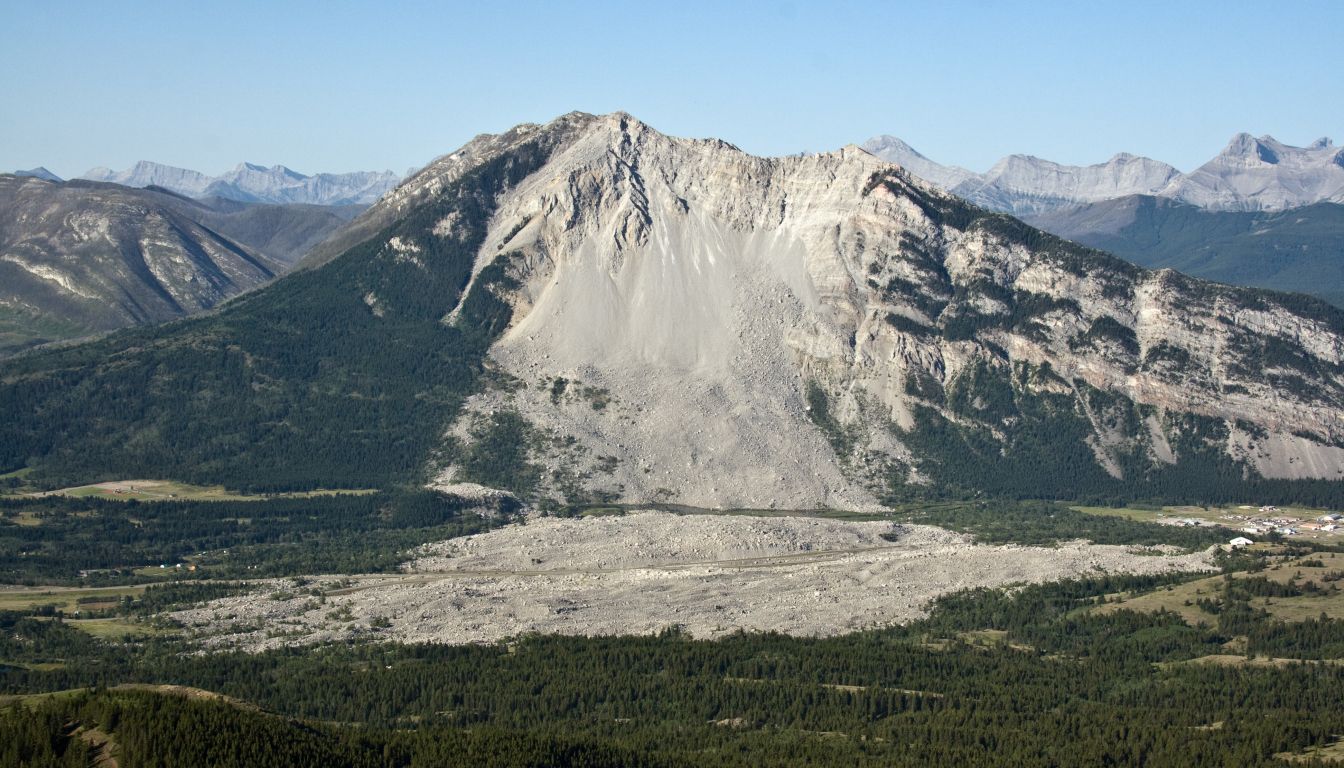 Working in partnership with the Historic Resources Management Branch, this project was conducted by the School of Construction, Southern Albertan Insitute of Technology (SAIT).  A photogrammetric survey was conducted with a DJI Phantom 4 Pro covering the Frank Slide Interpretation Centre and trails. The drone was flown with Pix4D Capture in nadir polygonal mission and the data processed in Pix4D Mapper producing an orthomosaic and Digital Surface Model (DSM).

The raw data files for this project are available for download from the archive repository. There are two file formats available: 3D point cloud in a .las file format and the orthomosaic tiles in world tiff file formats. Please download the metadata template to access metadata associated with each file. All data is published under the Attribution-Non-Commercial Creatives Common License CC BY-NC 4.0 and we would ask that you acknowledge this repository and the creators of the data sets in any research that results from the use of these data sets.