Head-Smashed-In Buffalo Jump is an important historic site to the Blackfoot people, and is designated as a Provincial Historic Resource, National Historic Site, and UNESCO World Heritage Site located in Southwestern Alberta. The significance of this site lies within its historical, archaeological, traditional, and scientific value. The archaeological layers of this site indicate use by the Indigenous Plains nations stretching back at least 6,000 years. Head-Smashed-In is one of the oldest, most extensive, and best-preserved examples of a buffalo jump in North America. Overall, this site and the surrounding landscape is a hugely valuable representation of this traditional hunting method used by Plains Nations until the late 19th century.

Buffalo, or more properly named plains bison, have always been an essential resource to the

Blackfoot people whose traditional territory stretches from the North Saskatchewan River in Alberta and Saskatchewan to the Yellowstone River in the state of Montana, and from the Continental Divide in the west to the Great Sand Hills in Saskatchewan [1].

The term “Blackfoot” actually refers to four Nations/Tribes which compose the Blackfoot Confederacy, or Siksikaitsiitapi: Amsskapipiikunniwa (Blackfeet Tribe) located in northern Montana, U.S.A., Kainaiwa (Blood Tribe), Siksikawa (Siksika Nation) and Aapatohipiikunniwa (Piikani Nation), located in southern Alberta, Canada [1]. Today, the Blackfoot Confederacy accounts for 25% of the Indigenous population of Alberta with a local population of 22,000 and a population of 45,000 for all of North America [1].

The Blackfoot traditional way of life was interrupted with the arrival of the North West Mounted Police in 1874 and then further disrupted with the near extinction of the North American bison in 1881 [2]. Tens of millions of buffalo had once roamed over the plains of North America, but with the arrival of Europeans came over hunting for resources and sport; the populations of bison rapidly declined to nearly nothing. Until then, the bison were not only a staple subsistence resource but a fundamental part of Blackfoot culture.

According to Blackfoot oral tradition, as Old Man traveled, he created the mountains, rivers, grass, and trees [3]. When he came to the present-day Porcupine Hills, Old Man formed the images of people from mud and breathed life into them. When the people asked what they would eat, Old Man created images of buffalo from clay and brought them to life as well. Old Man then took the people to a rocky ledge and called to the buffalo who ran over the cliff and said “Those are your food” [3].

A buffalo jump, or pishkun, refers to land formations that were culturally used to mass-hunt plains bison in North America. The way that the jumps worked were through utilizing the landscape and mentality of the bison to run them off of a cliff, where they would either die from the impact or be immobilized and more easily killed by people.

This type of hunting was a communal endeavour. Before the use of horses, bison would be gathered into a natural basin formation that was above the main cliff or jump [3]. From the gathering basin, “buffalo runners” dressed in buffalo or wolf hides would guide the animals through the basin towards the drive lanes which lead up to the cliff itself. Drive lanes would be marked by rock cairns and piles of brush and were used to direct the bison herd toward the cliff once a stampede was started [3].

When the herd had been moved into the drive lanes, men, women, and children would jump up from behind the cairns and brush piles that marked the avenue of the drive lanes. Yelling and waving robes, the bison herd would be spooked into a full gallop following the direction of the lanes [3]. From the top of most jumps the cliff is nearly impossible to see while approaching and the momentum of the herd would push any animals that tried to stop forward and over the edge. The animals that weren’t killed from the fall would then be killed with spears, bows or clubs by hunters situated at the bottom of the cliff.

This method of hunting has been called “the most product food getting enterprise ever derived by human beings” as a single jump could yield over 80,000 kg of edible meat [3]. Once the jump event was over, it would be a massive communal effort to process the animals. Fresh meat was one benefit, but other parts of the bison would be used as well. Bladders and stomachs could be used to produce the bags for boiling pits; hides could be turned into furs for the winter or processed into leather for a variety of uses. Meat was also dried and mixed with fat and berries to create pemmican. This was an invaluable food source across the plains as it contained the protein, nutrients, and high calories of its ingredients in a preserved form that could last through the winter and be easily transported as people moved through the landscape.

The Head-Smashed-In Buffalo Jump is located in Southern Alberta, approximately 20km northwest of Fort MacLeod and in the heart of the Blackfoot Nation’s traditional territory [3]. It represents one of the best persevered buffalo jumps left in the area. The bones of the bison are high in potassium, and bone mining was a profitable industry through both World Wars, the droughts throughout the 1920s, and the Great Depression [4]. Excavated both with hand tools and mechanized equipment, kill sites throughout Alberta, Montana, and North Dakota were heavily exploited for sale to commercial fertilizer manufacturers [3; 4]. Coupled with looting for artifacts, many large kill sites were thoroughly destroyed in the early half of the 20th century [4].

Due to a combination of factors, including its distance from the railroad and thus a difficulty to commercially exploit the site, Head-Smashed-In was saved from this type of destruction. As such it is a remarkable example of this type of plains hunting method. It received its designation as a National Historic Site in 1968, a Provincial Historic Resource in 1979, and a World Heritage Site in 1981 [5]. Click here to take a virtual tour of the site.

This site is 1,470 acres that include portions of the gathering basin, the drive lanes, the cliff, and the processing area [2]. Archaeologically, the site contains a wide variety of cultural remains associated with this method of communal hunting. These remains include cairns from the drive lanes, stone weapons and tools such as projectile points, whole and butchered bison bones, fire broken rock, as well as artifacts from meat processing and camp life in the fields below the cliff [2].

The cultural remains not only preserve evidence of periodic ways of life, but the evolution of tools and methods associated with this hunting technique. The archaeological evidence indicates the jump was used by at least 6,000 years ago, and that other hunting methods were used in this area as far back as 10,000 years ago [2]. Except for one interval, this site was used continuously for bison hunting throughout that time frame. This attests not only to the skill of the hunters and the importance of large-scale bison kills to the people of the plains, but also to the suitability of the Head-Smashed-In jump. The 300 m long cliff is now 10 m high at its tallest point, but this sits over archaeological deposits over 10 m deep and when in use, the cliff would have been over 20 m high in some locations [2; 3].

While it is a particularly well-preserved example of a buffalo jump and a protected site, Head-Smashed-In Buffalo Jump is still subject to natural and human threats [6]. With increases in more extreme weather events, there has been a noticeable increase in erosion of the site. This has been most evident on the cliff-face where portions of rocks have fallen off in recent years, leading to temporary closures of the pathways below the jump.

Increases in tourism also pose an erosional threat to the site as larger numbers of visitors can contribution to the degradation of pathways, especially those along the top of the jump [6]. Access to the property is controlled and movement throughout the site is restricted to mark pathways in order to minimize these impacts [6].

This page has been created in collaboration with individuals from Head-Smashed-In Buffalo Jump. Many thanks are extended to them for their help in editing, providing cultural knowledge, and verifying the information contained within this page. 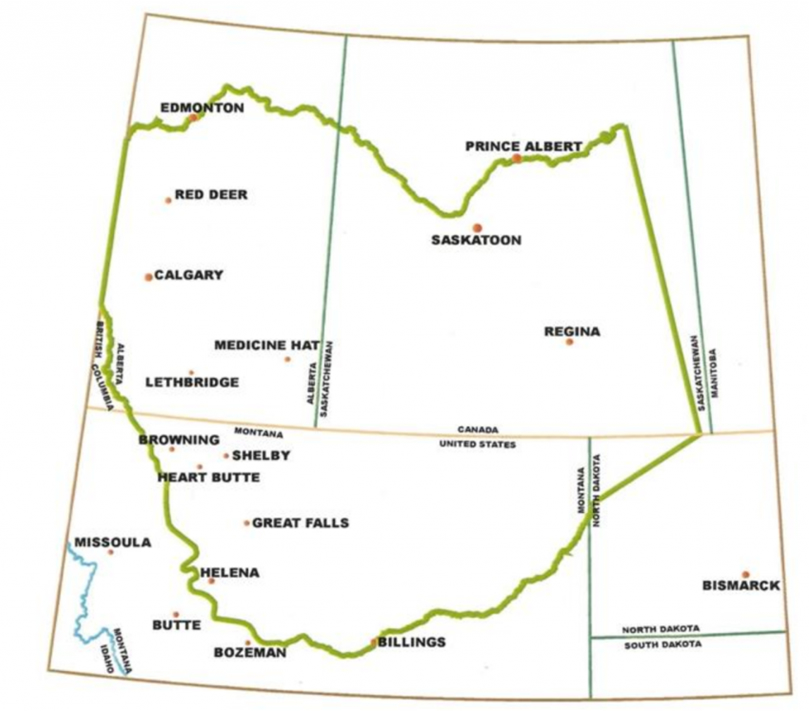 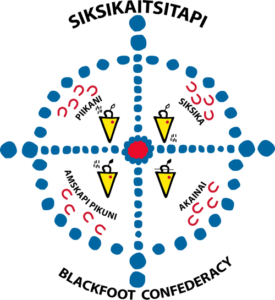 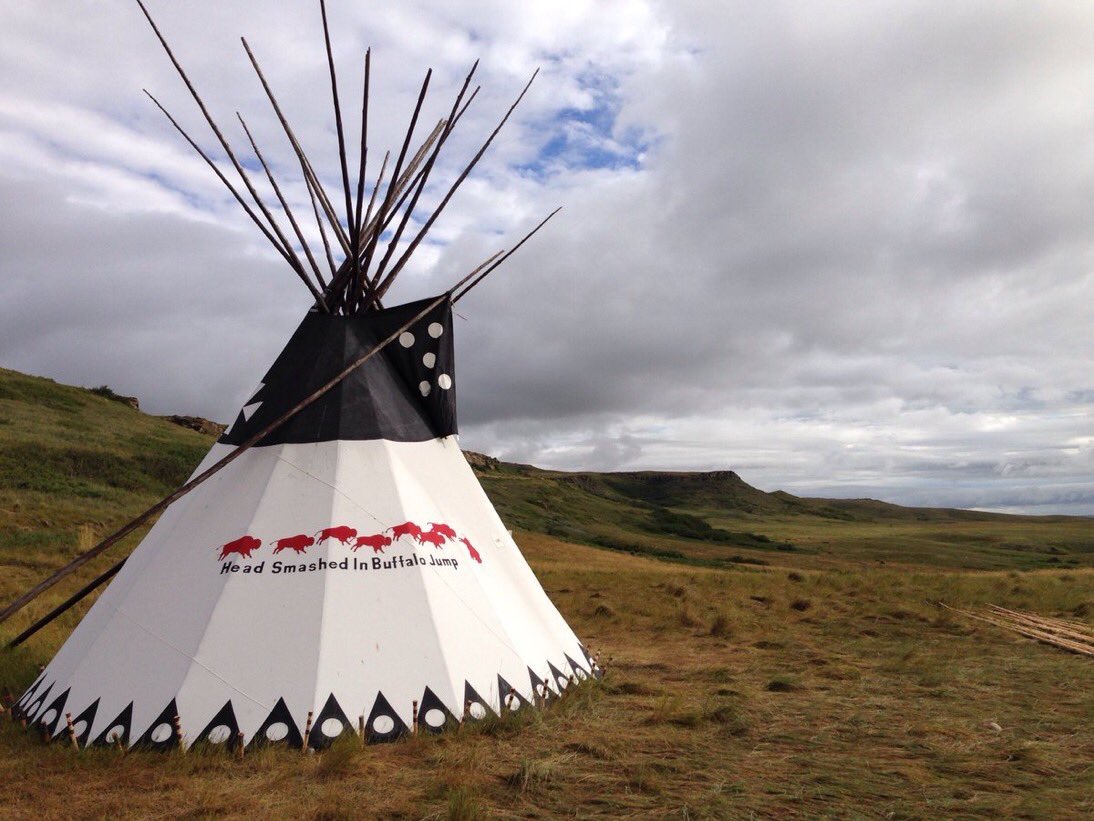 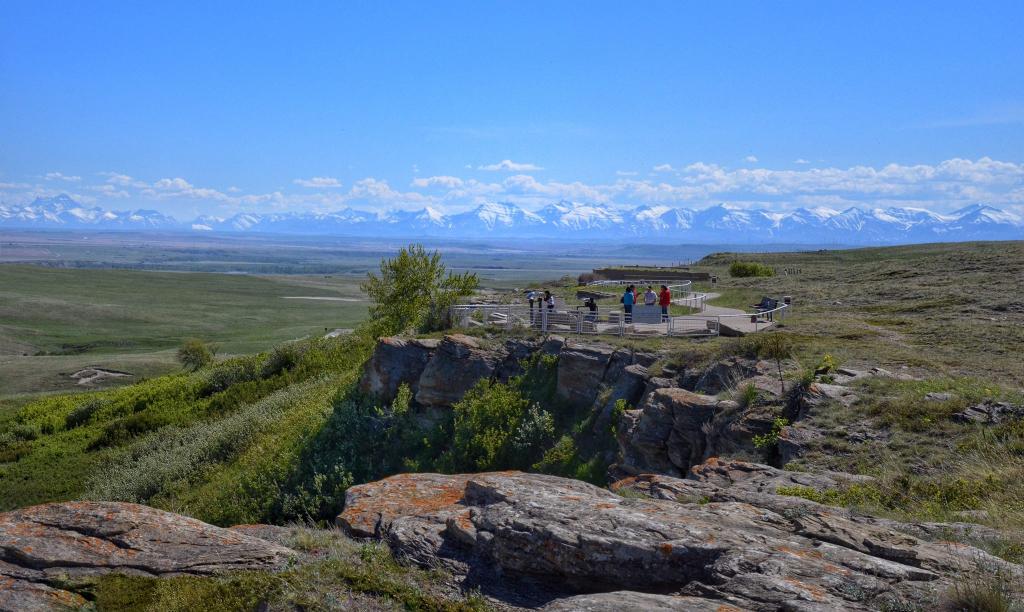 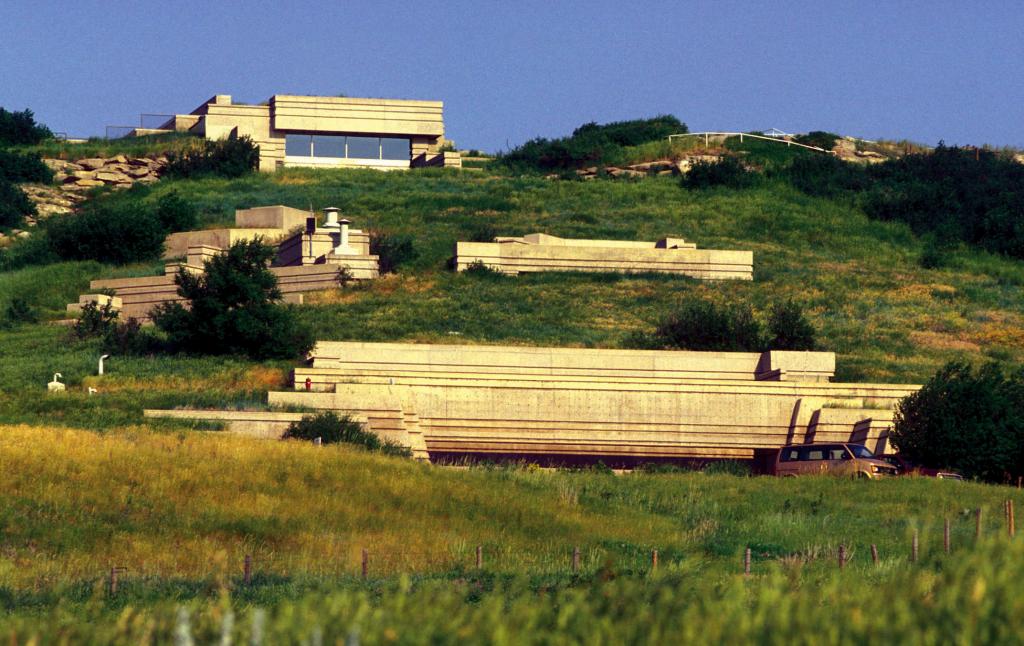 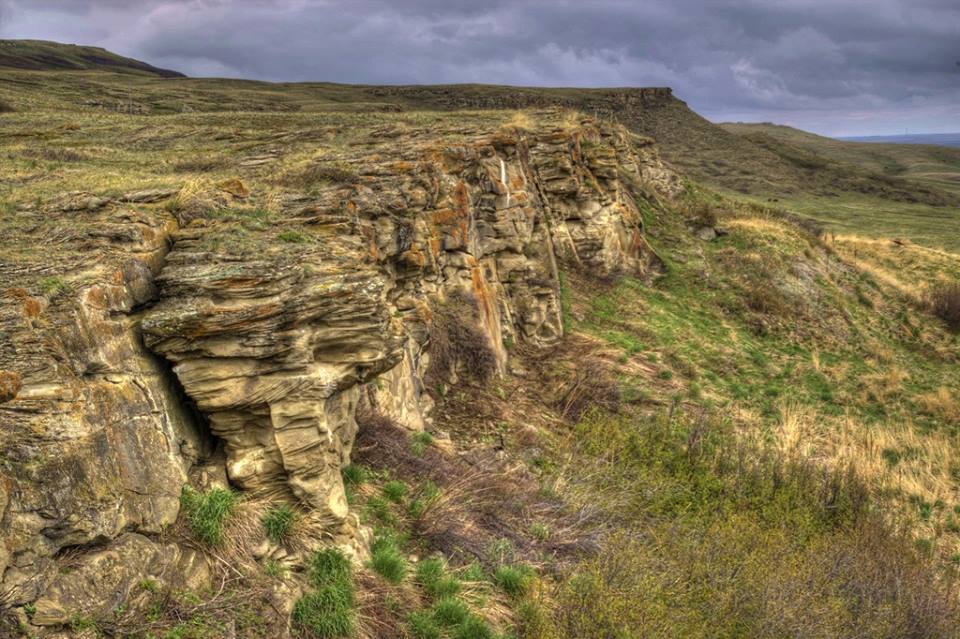 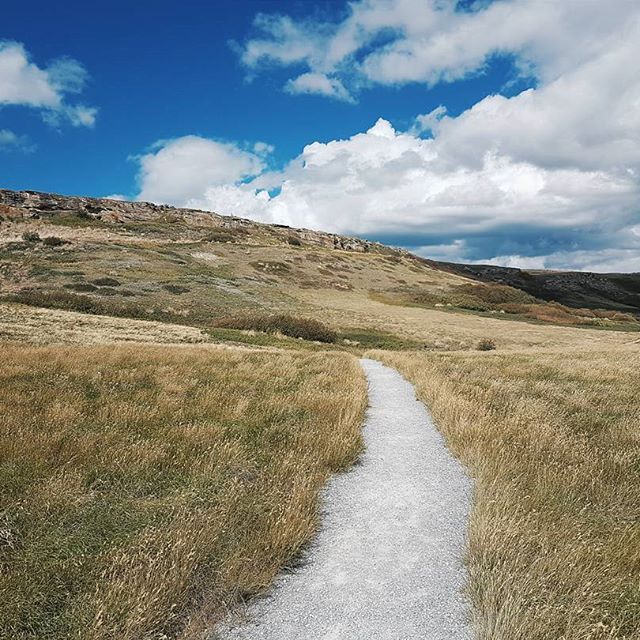 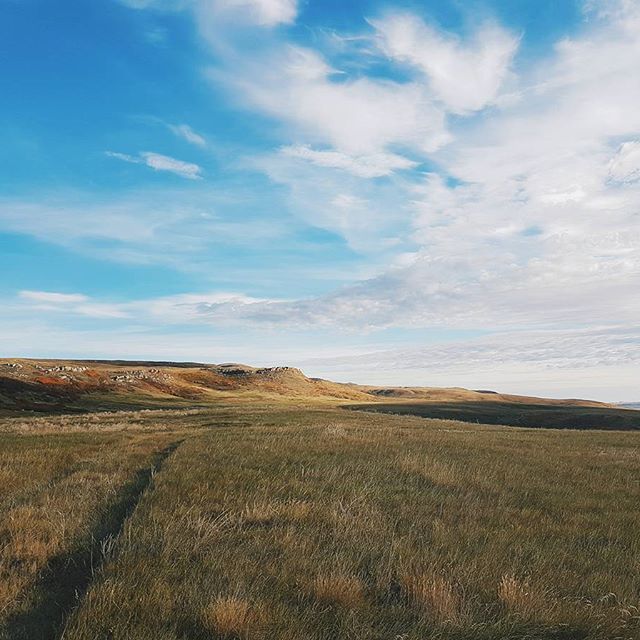 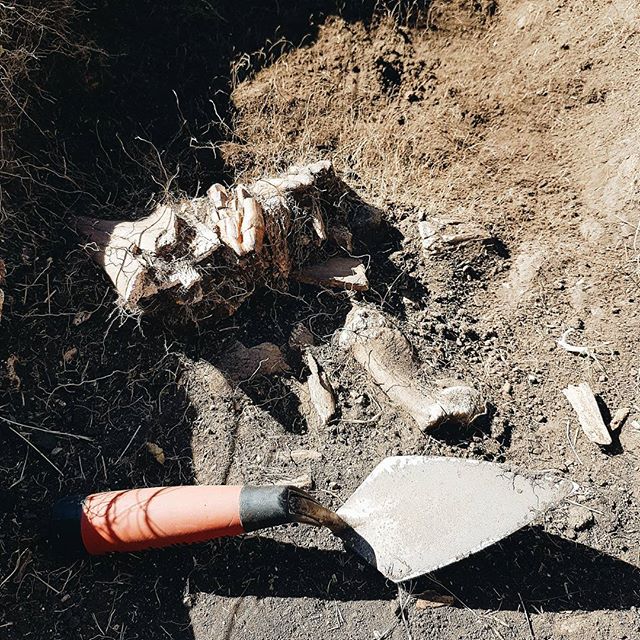 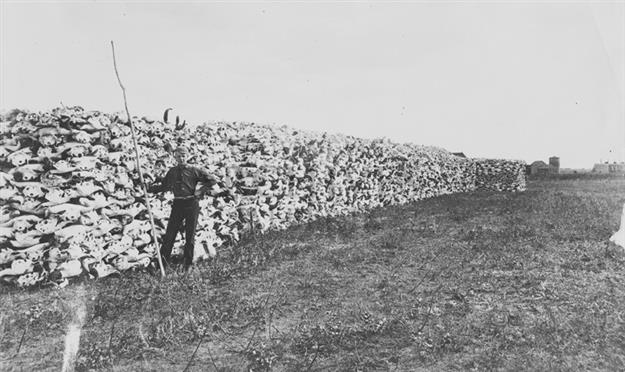 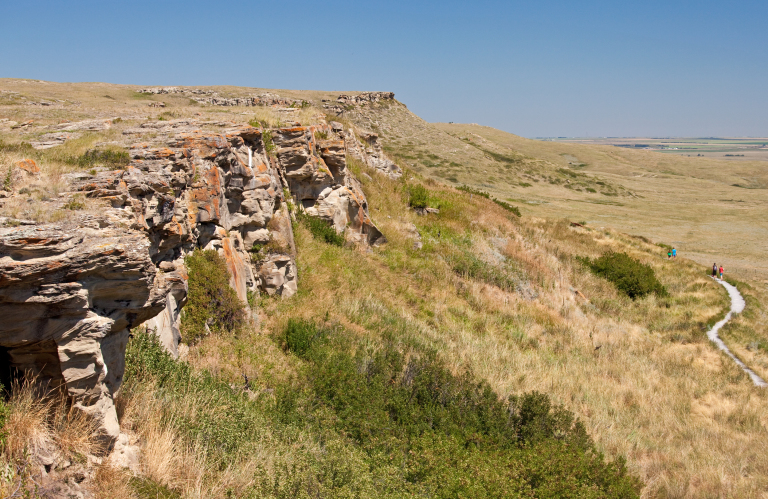 Working in partnership with the Historic Resources Management Branch, this project was conducted by the School of Construction, Southern Albertan Insitute of Technology (SAIT). Two different surveys were conducted. A photogrammetric survey was conducted with a DJI Matrice 210 RTK  drone with a DJI D-RTK 2 mobile station for real-time differential corrections covering the Head-Smashed-In Interpretation Centre and Buffalo Jump. The drone was flown with Pix4D Capture in nadir polygonal mission and the data processed in Pix4D Mapper producing an orthomosaic and Digital Surface Model (DSM). The terrestrial laser scanning (TLS) survey was conducted with a Leica C10 and a Licea BKL 360 and the data processed in Licea Cyclone. This survey covered the kill site trail and the top of the buffalo jump cliff face. To provide control points for both surveys a GPS survey was conducted with a Lecia GS14 Rover and base kit located on an Alberta Survey Control Marker (ASCM). 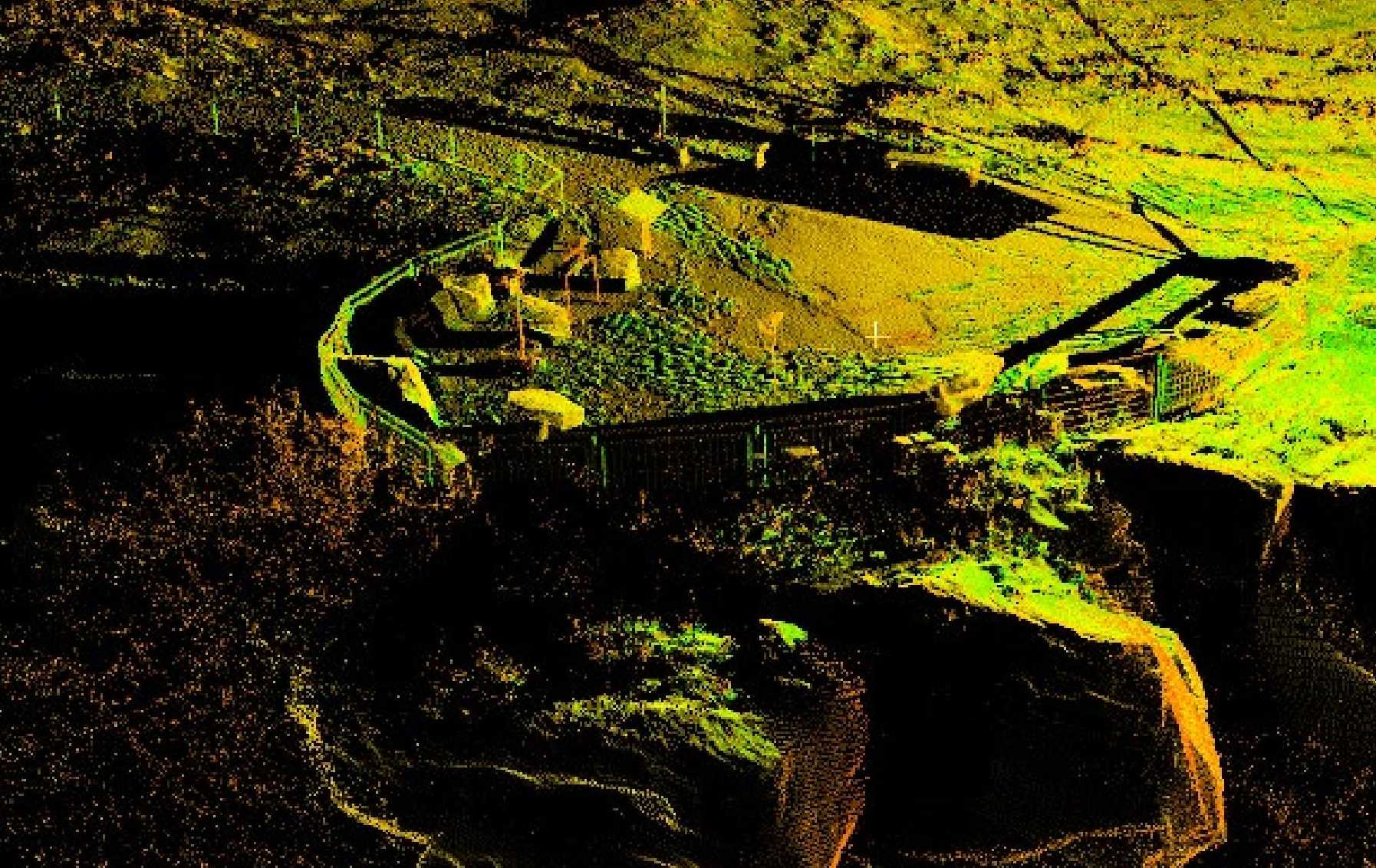 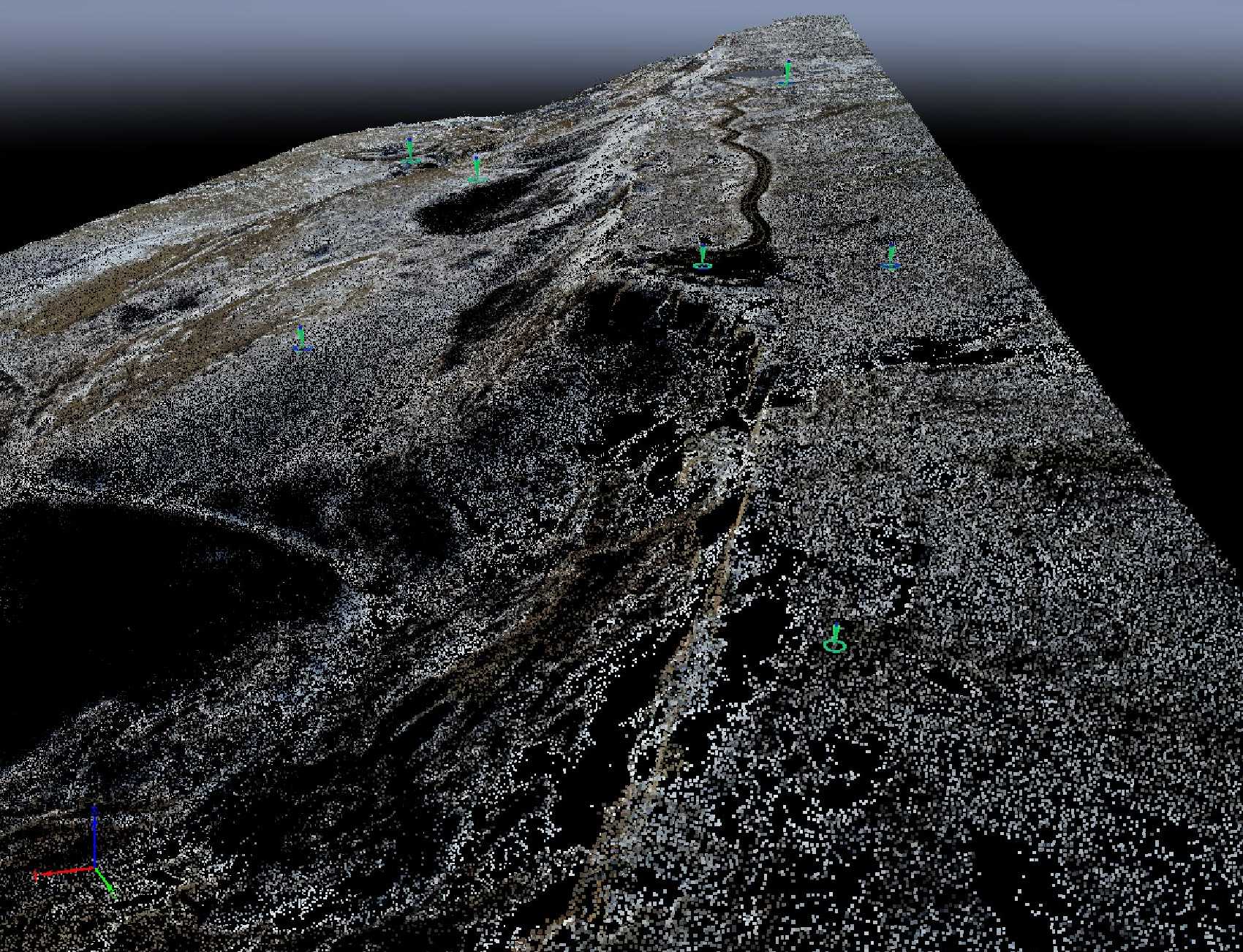 The raw data files for this project are available for download from the archive repository. There are two file formats available: 3D point cloud in a .las file format and the orthomosaic tiles in world tiff file formats. Please download the metadata template to access metadata associated with each file. All data is published under the Attribution-Non-Commercial Creatives Common License CC BY-NC 4.0 and we would ask that you acknowledge this repository and data collectors in any research that results from the use of these data sets.