The 9th Avenue SE Inglewood Bridge built in 1908-1909 served the City of Calgary for 110 years. The heritage value of this structure comes from its Parker Camelback design that was a popular style used throughout North America of which this bridge was representative of [1]. This design was also the most frequent used in Calgary from 1887 to 1912 with the MacDonald bridge (1911) crossing the Elbow, the Reconciliation (1910) crossing the Bow, the Hextall (1910) crossing the Bow, and the St. George’s Island (1908) bridges still serving as surviving representations of this era and design [1]. Due to reduced carrying capacity, a failure to meet modern design and engineering standards, and insufficient flood resiliency the Inglewood Bridge was scheduled to be removed in July 2019 and replaced with a more modern structure that could better serve the needs of the city [2]. As part of Calgary’s heritage in the city’s oldest neighborhood, this bridge was documented with terrestrial laser scanning before its removal.

The community of Inglewood is Calgary’s oldest official neighborhood [3]. The earliest settlement in today’s City of Calgary was constructed just east of the Elbow River between 1875 and 1882 in the area that would become Inglewood, across the river from the Northwest Mounted Police post of Fort Calgary constructed itself in 1875 [4]. In 1882 it was announced by the Canadian Pacific Railway (CRP) that the current line into Winnipeg would be extended out to Calgary; local developers, the Northwest Mounted Police Commissionaire Ancheson G. Irvine, and his business partner Major John Stewart seized this opportunity to survey and purchase half a section of land in anticipation of a new station and adjacent townsite [3,4]. The current layout of the neighborhood still largely reflects the original Irvine and Stewart Town Site Plan with two rectangular grids extending from the Bow River on the North to the CPR line on the south, separated in the middle by the main street Atlantic Avenue, now named 9th Avenue SE [4].

The area saw steady growth; particularly in boom years from 1906 to 1912 Inglewood and Calgary saw rapid industrial, commercial, and residential development [4]. It was an attractive settlement for prominent citizens including notable military figure Major John Stewart, Colonel James Walker who ran the Cochrane Ranch sawmill, William Pearce who worked as an engineer for Dominion Surveys, and Alfred Earnest Cross who was the founder of Calgary Brewing and Malting Company [4]. Due to the malt smell of this brewery the area was known as Brewery Flats or East Calgary; it was not officially named Inglewood until 1911 [3,4]. While the early economic boom ended in 1913 with the onset of a global depression before World War I, today there are approximately 400 buildings mostly with heritage designation still in Inglewood from this early period of development [4].

In conjunction with the growing operations on the east side of the river, residents and businesses in Inglewood needed to be connected with the rest of Calgary. The first bridge built to span the Elbow River was constructed by James Walker in 1882 and was a pedestrian bridge to allow access for the employees of his sawmill to cross between their homes and the business [1]. The bridge was destroyed by an ice flow in a flood of October 1883 [1]. Inglewood was again connected to the rest of Calgary only by a ferry service, which was too expensive to be readily used by citizens and companies [1]. Colonel James Macleod requested funding from the Department of the Interior to construct another bridge and was given $500 to build one in 1884 at the 9th Avenue SE location, then called Atlantic Avenue; this bridge was also destroyed by flooding but only one month after its completion and the community again had to resort to the ferry service [1].

The members of Inglewood petitioned Town Council for funding to construct a new bridge and were granted $3,000 to do so in February of 1887 [1]. By July of the same year, a wooden pile bridge with a 3-foot plank deck had been completed. In 1897, this bridge was replaced with the first steel through-truss bridge built in Calgary constructed by the Central Bridge & Engineering Company and had a 5-foot pedestrian walkway on the north side [1].

As Inglewood grew, 9th Avenue SE became an important commercial corridor both for the neighborhood and Calgary in general, the population of which had grown substantially from 500 at the time of the city’s incorporation in 1884 to 30,000 by 1909 [1]. To accommodate the growing demands of the city, the Calgary Electric Railway streetcar system was put in place along the 9th Avenue SE corridor. To support the trackways for this system, the 1897 bridge was replaced with a Parker Camelback Truss Bridge constructed from 1908-1909 by the Algoma Steel Bridge Company based out of Winnipeg, with ties to the larger Algoma Steel company of Sault Ste Marie, Ontario [1]. This bridge was a single span riveted steel bridge, that was 150 feet long and 33 feet wide with five-foot walkways on either side and remained in operation in its 9th Avenue SE location until 2019 [1].

While the 9th Avenue SE bridge had undergone various alterations to provide adequate service to City of Calgary residents throughout its years, such as the removal of the streetcar tracks upon discontinuation of the system in 1950 and the addition of lamps and secondary railings, by 2019 it had outlived its original lifespan [1,2]. It also had reduced load-carrying capacity, no longer met current design and engineering standards, and was constructed low enough to have been at risk by the 2013 flooding event. Due to these concerns the bridge was closed in July 2019 and replaced by a temporary bridge across the Elbow just to the south of the 9th Avenue SE location. The temporary bridge will itself be replaced by a new bridge that will be constructed again across 9th Avenue SE and be designed to meet the needs of the city for the next 100 years, featuring a wider bridge deck, more lanes, and increased flood resiliency [2]. Learn more about the replacement project at  www.calgary.ca/9avebridge.

Historical images were sourced from the Glenbow Archives and a report produced for the city of Calgary by Donald Luxton & Associates (Reference can be found at the bottom of the background page). Modern images of the scanning process were provided by the Catpture2Preserve Team. 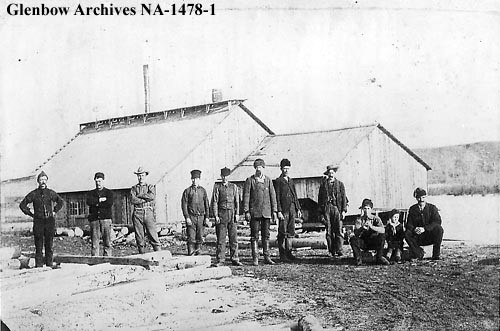 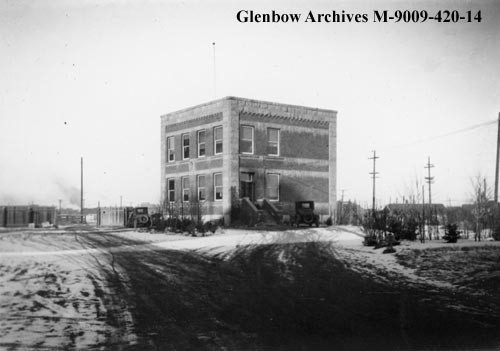 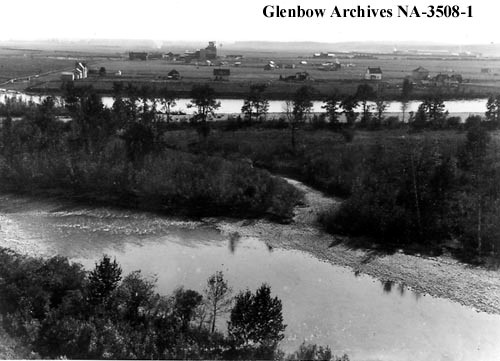 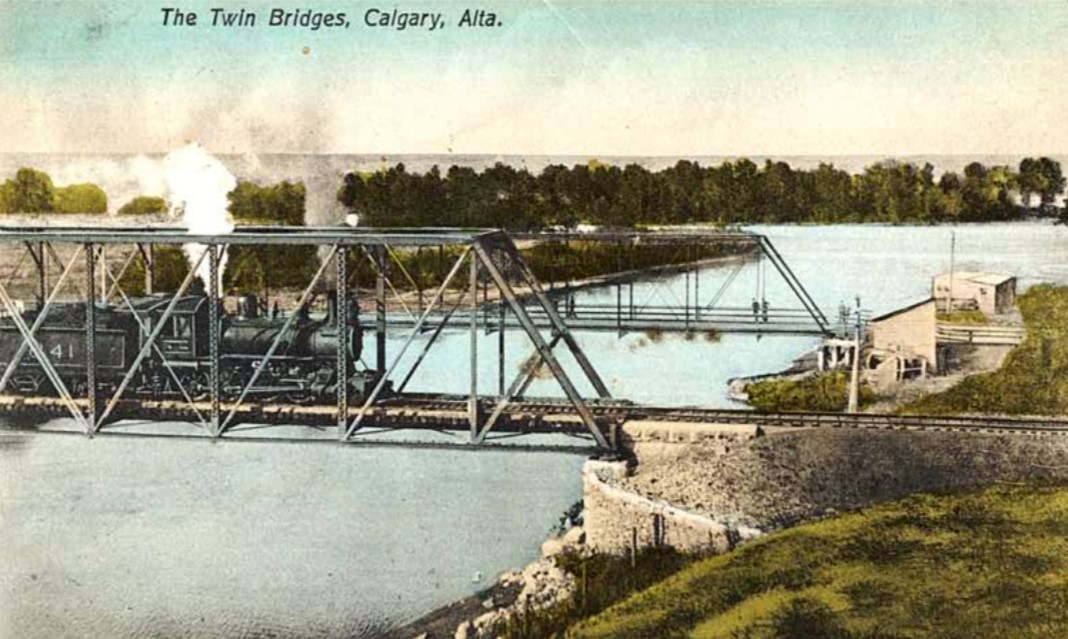 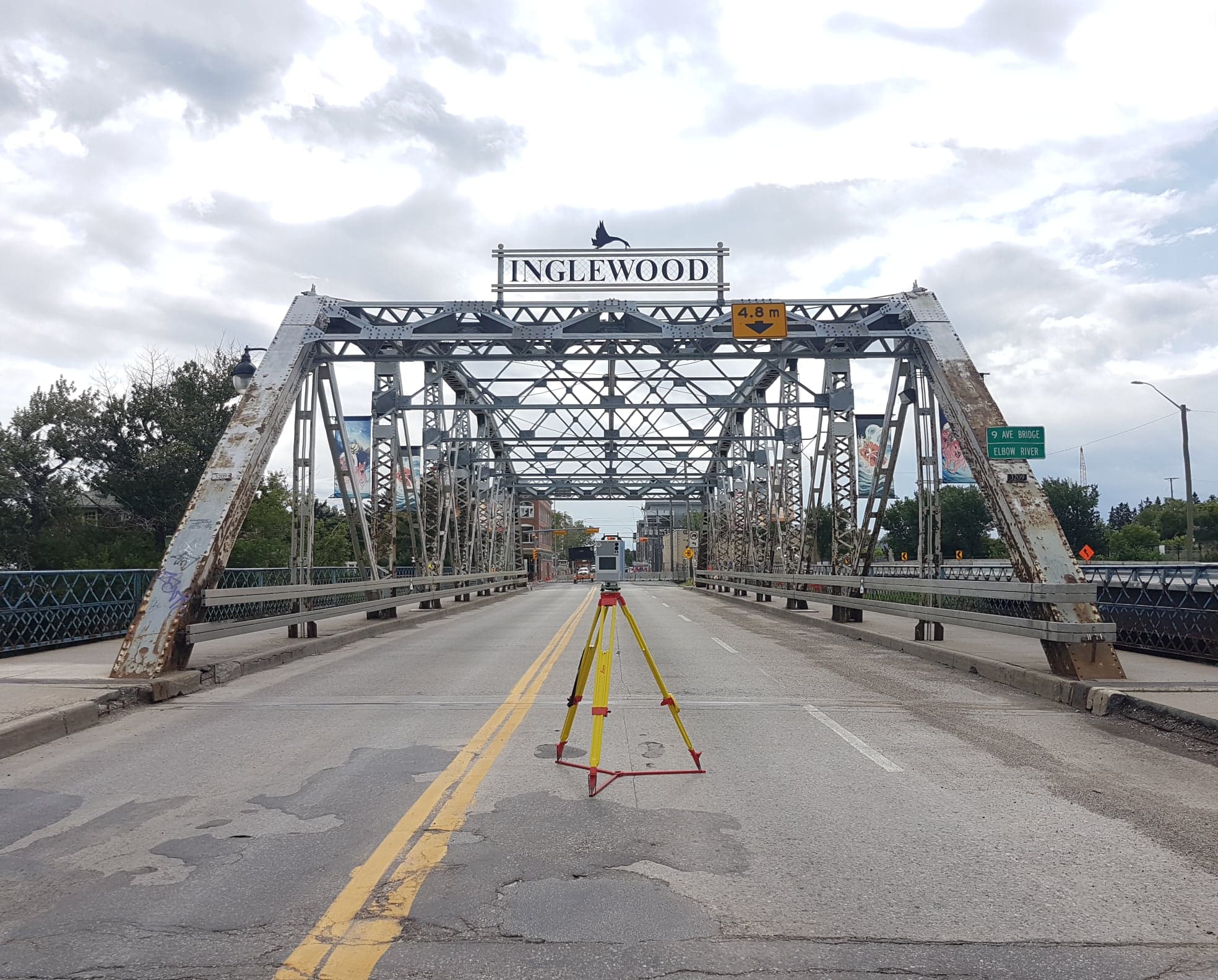 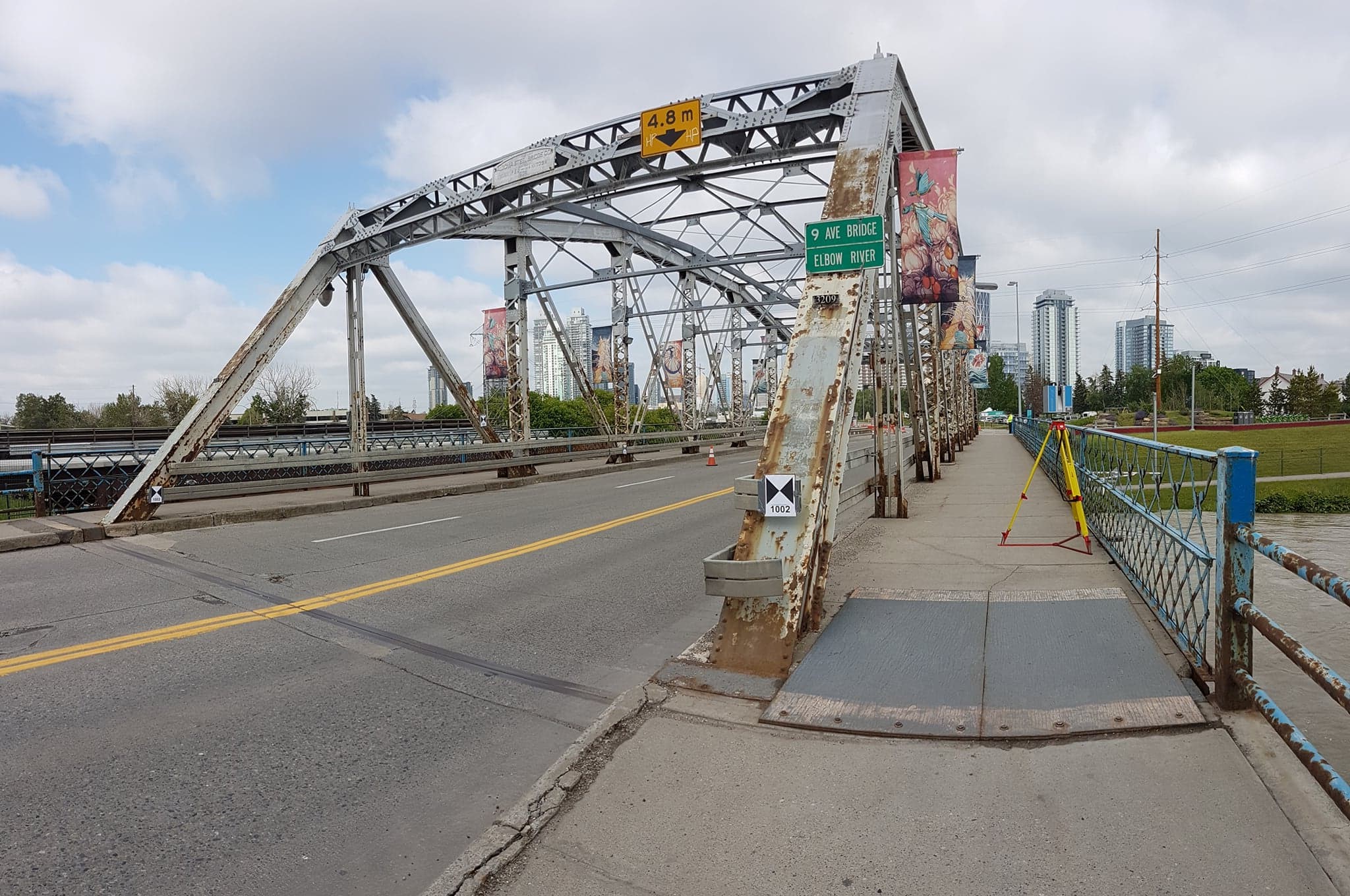 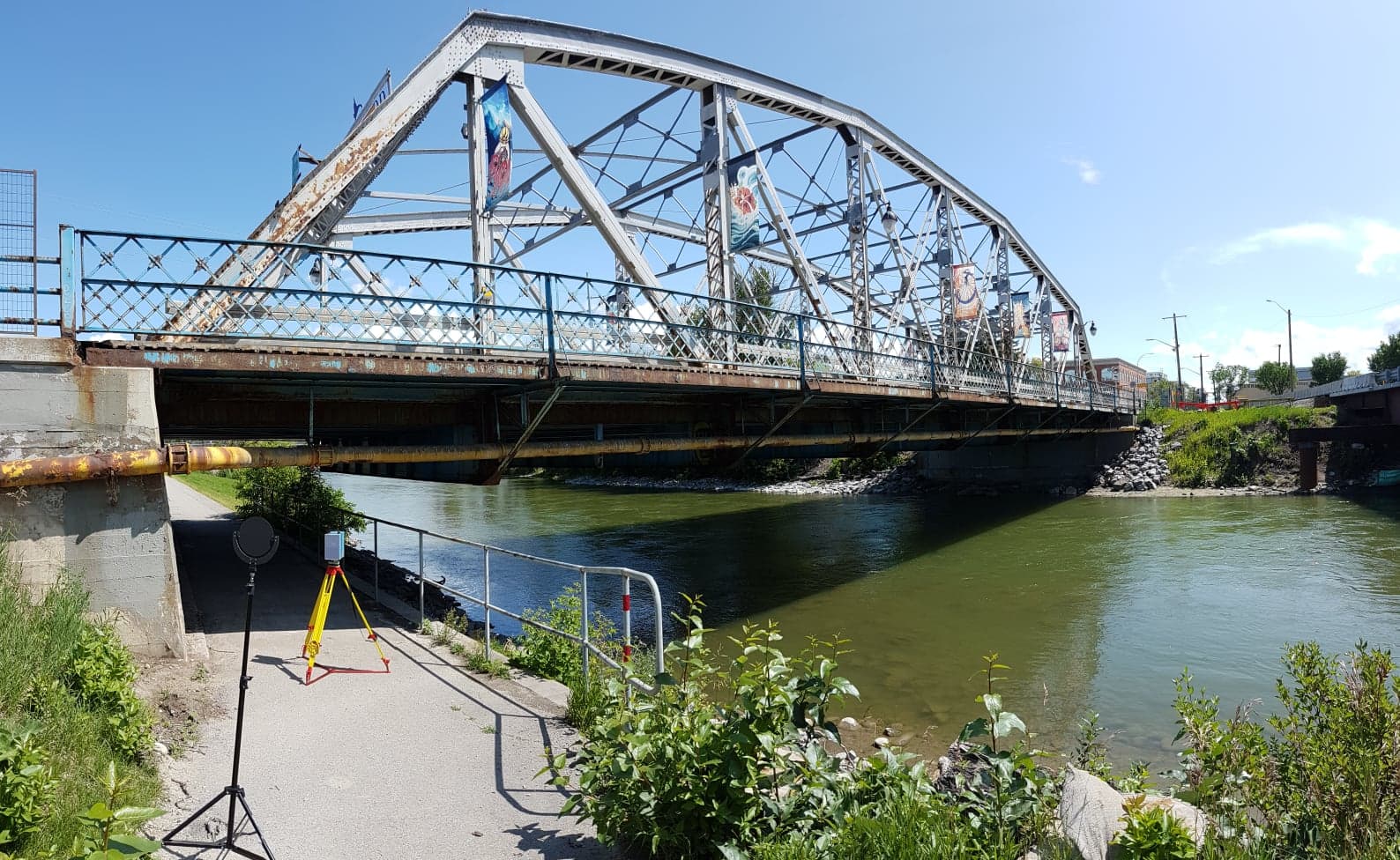 The Digitally Preserving Alberta’s Diverse Cultural Heritage project approached the City of Calgary to document the 9th Avenue SE Inglewood Bridge before its removal and subsequent replacement. The bridge was first documented on June 22, 2019 with a Z+F 5010X scanner and approximately 20 mounted paper targets. However, on this date the bridge was still in operation and due to the vibrations of the bridge deck as traffic drove by the scanner was unable to complete scans on the bridge itself. On this day only the east and west end portions of the bridge could be captured.

The project returned on July 18, 2019 when the bridge had been closed to the public to complete the documentation process using the Z+F 5010X scanner. On this day two scanning projects were completed. The first to capture the top of the bridge and the bridge deck, using a combination of six paddle targets and approximately 12 mounted paper targets with a total of 14 scanning locations that zig-zagged across the bridge. The second smaller project to capture below the bridge along a closed bike path below the west side, using six paddle targets with a total of five scanning locations that followed along the available pathway. The scanning projects were individually registered using Z+F Laser Control software and then exported into AutoDesk ReCap to be combined. The resulting point cloud is a combination of the two scanning projects from this later date. 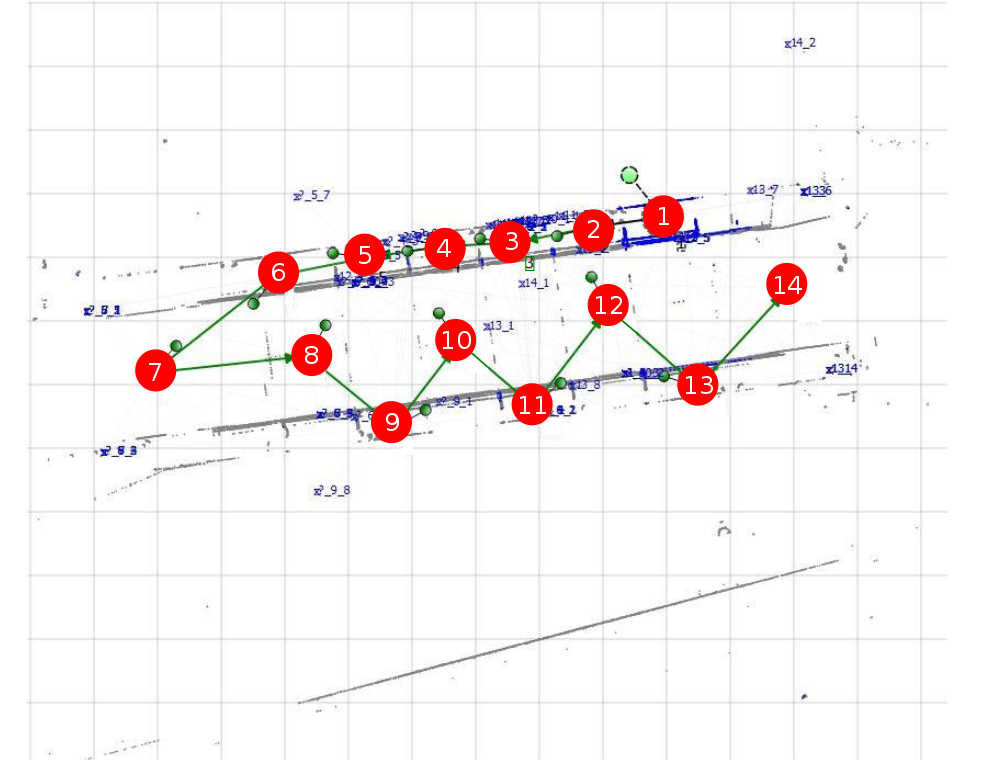 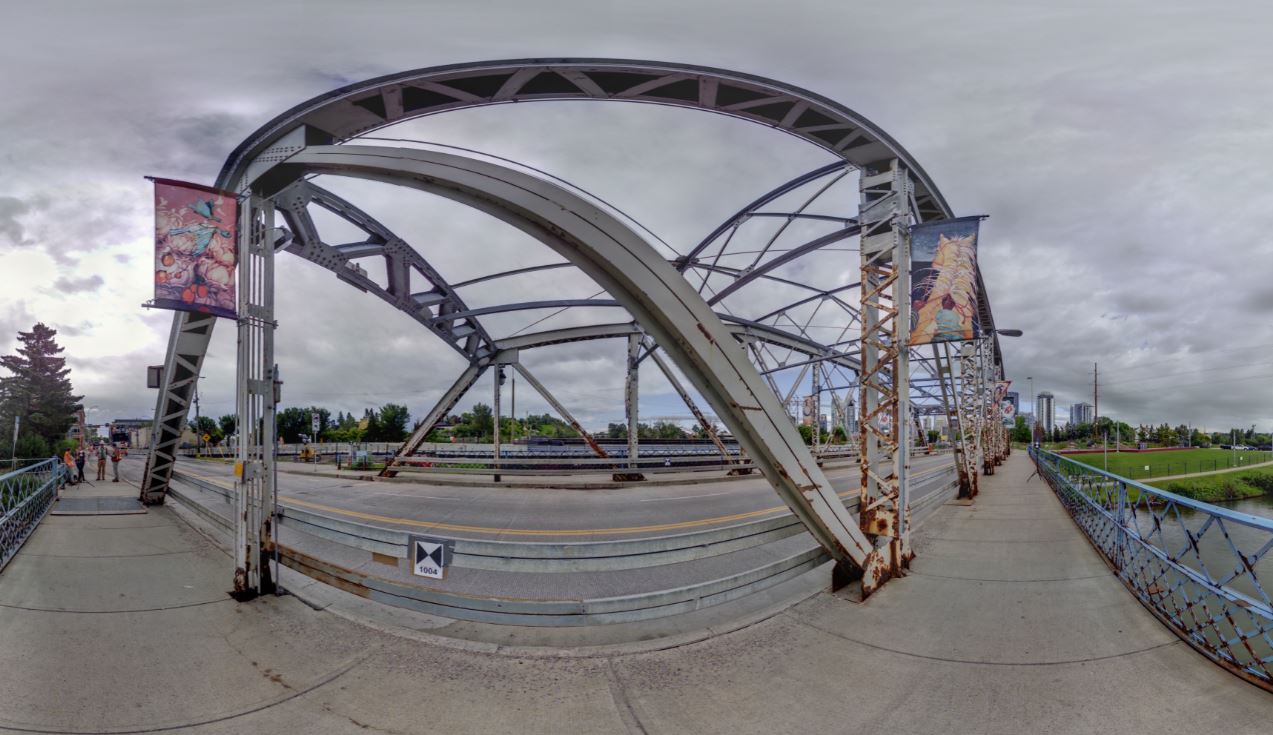 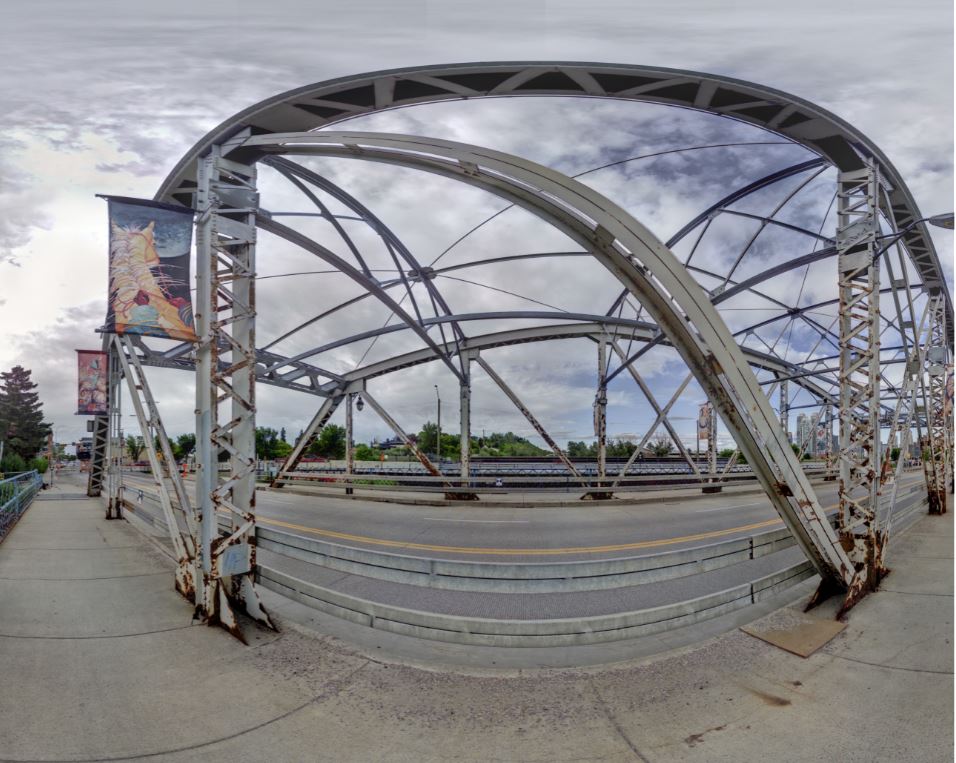 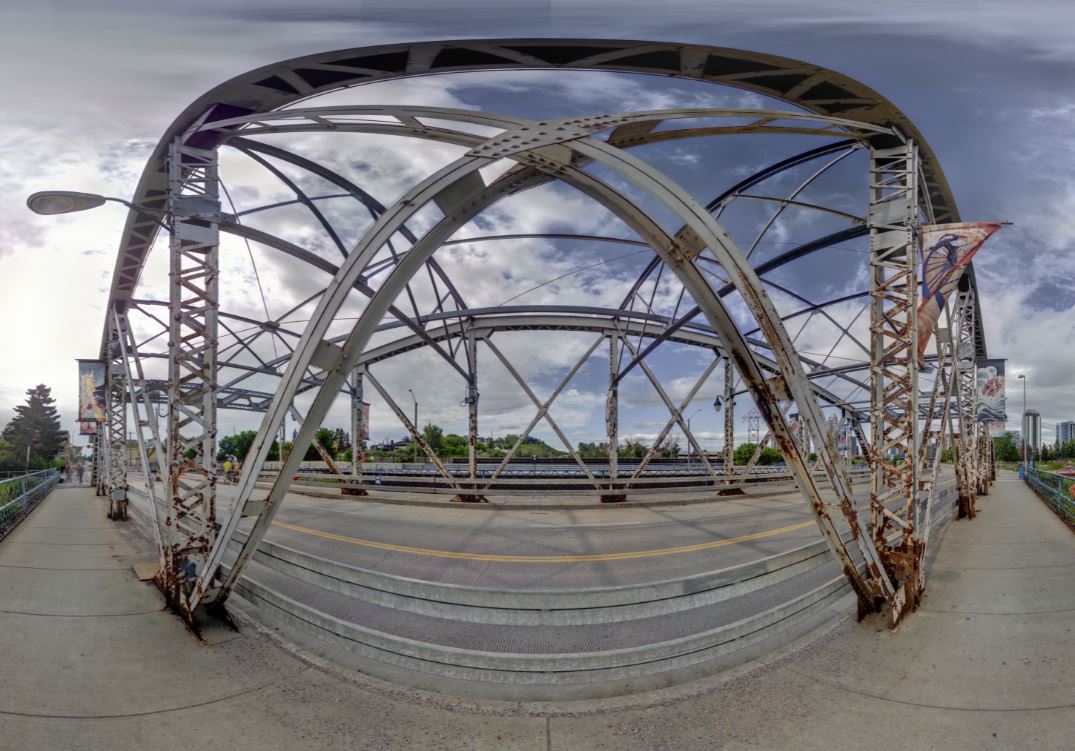 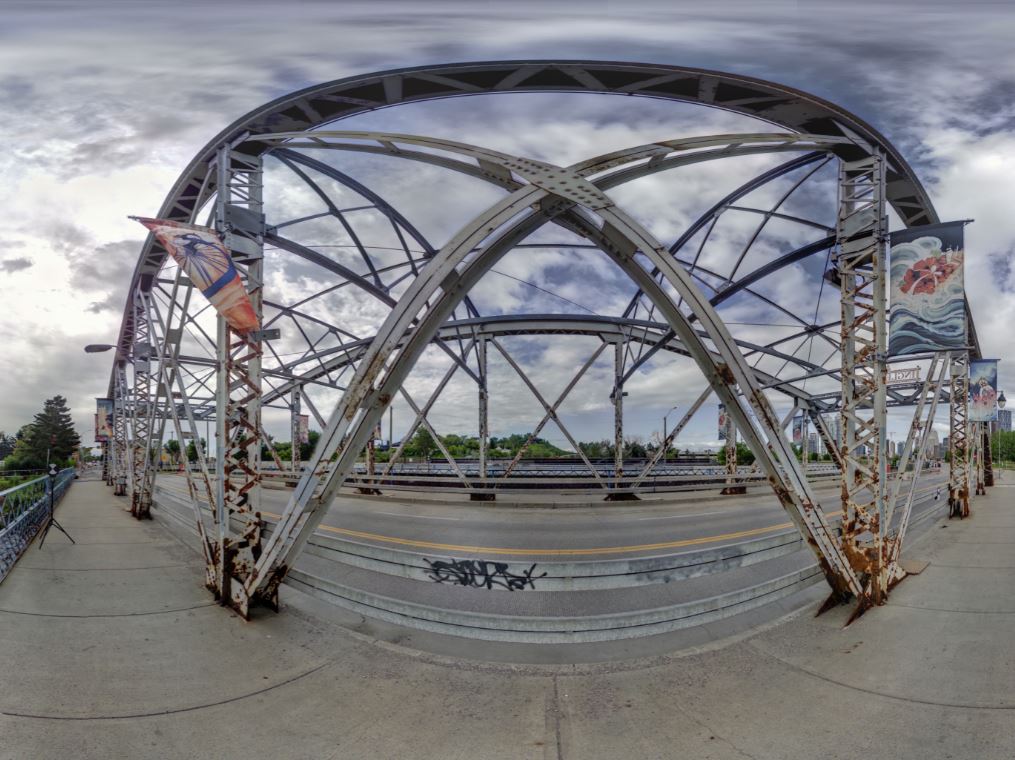 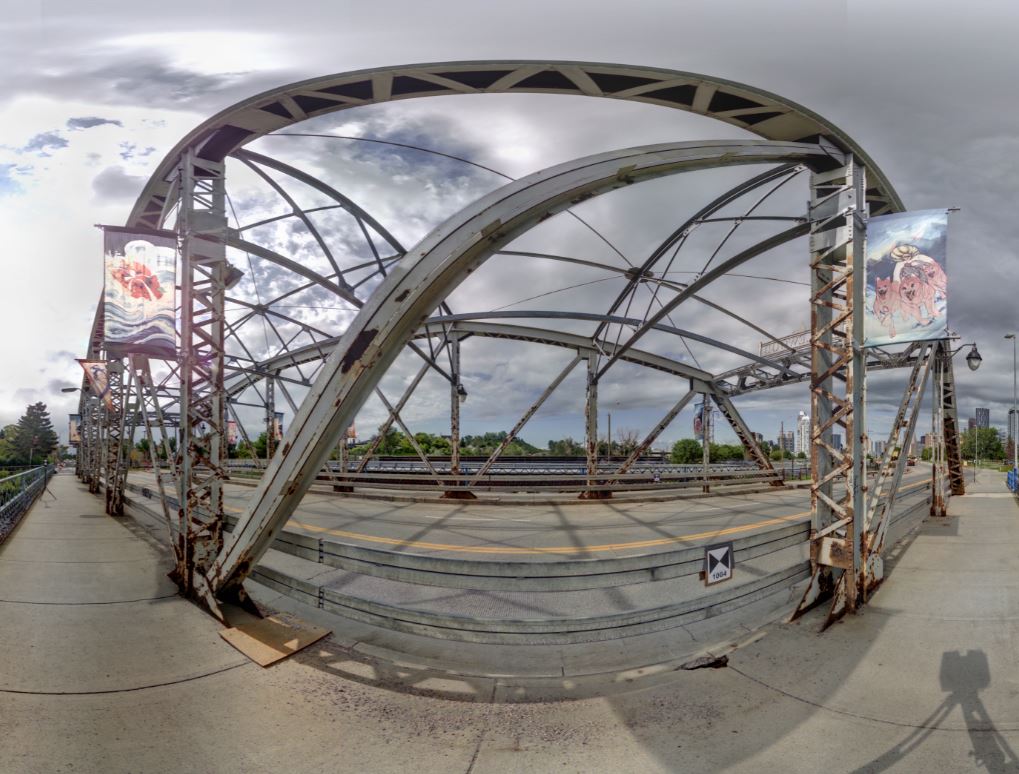 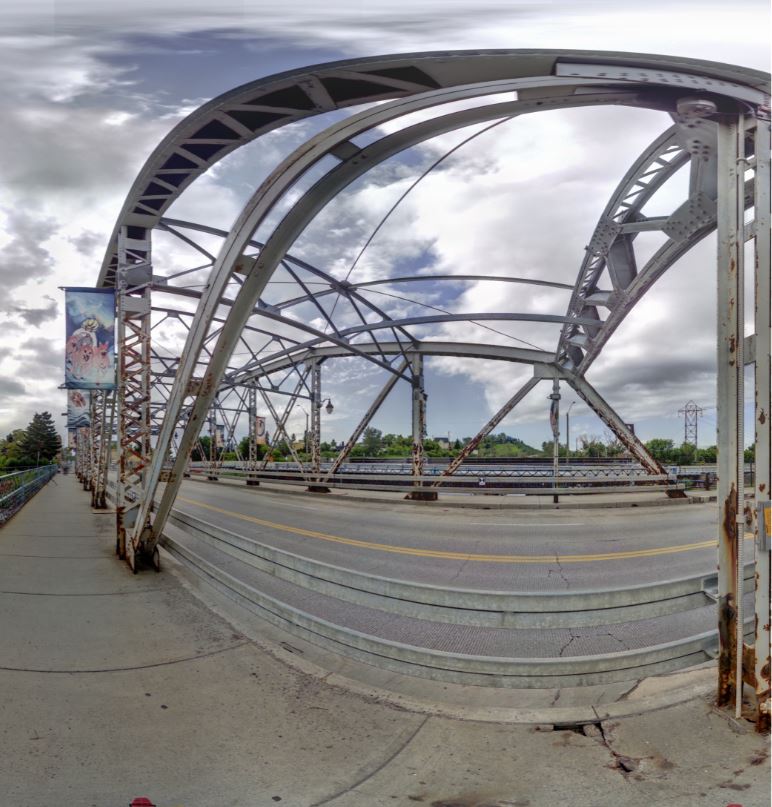 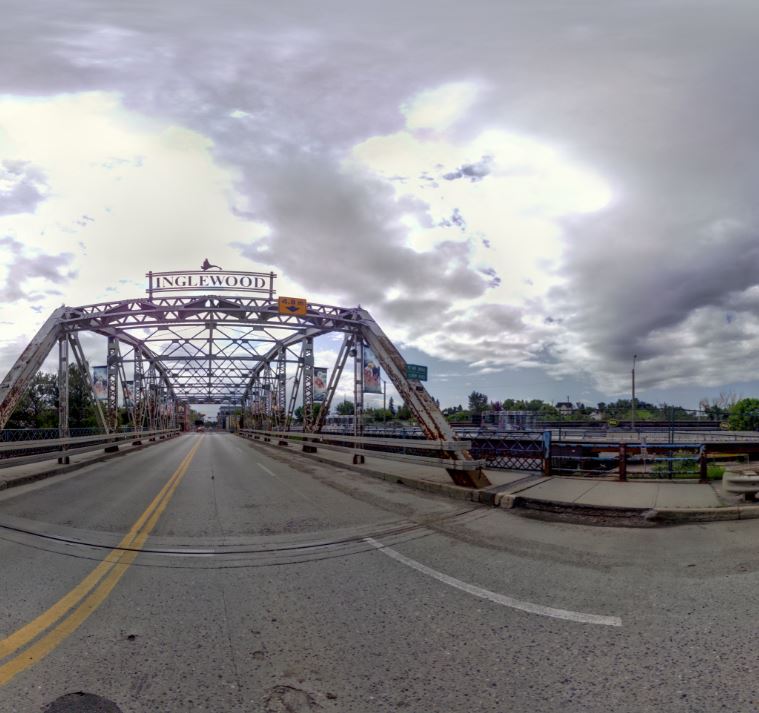 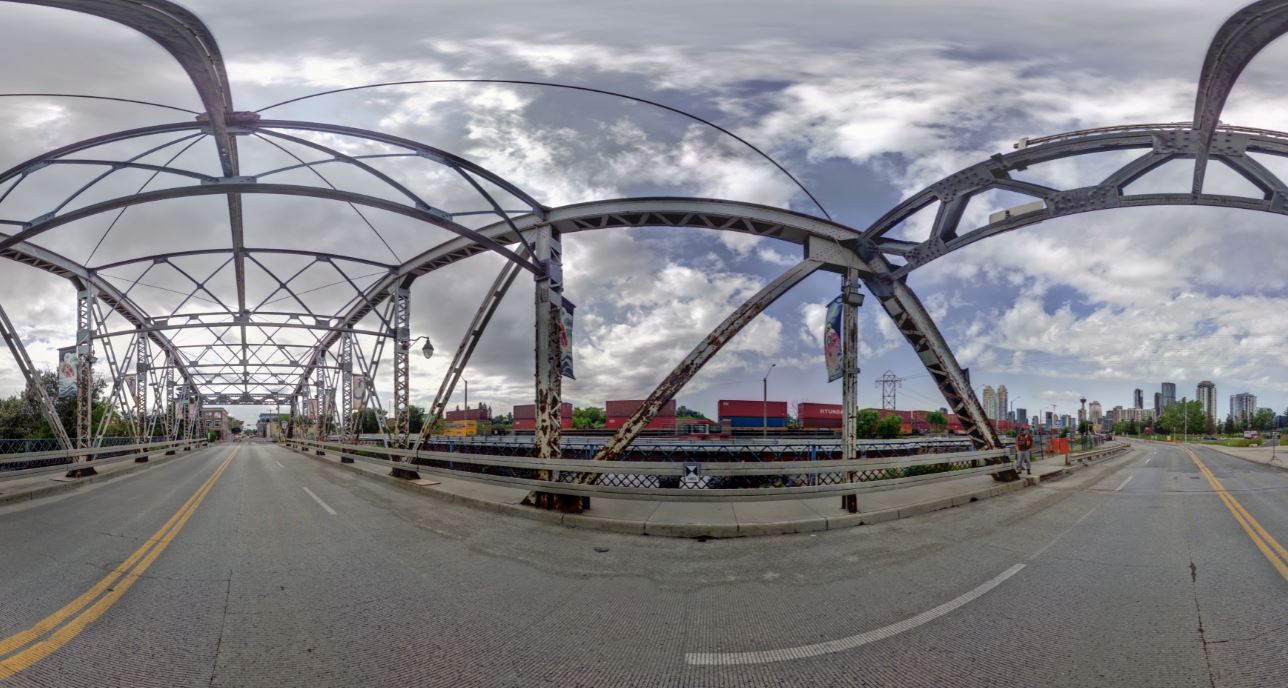 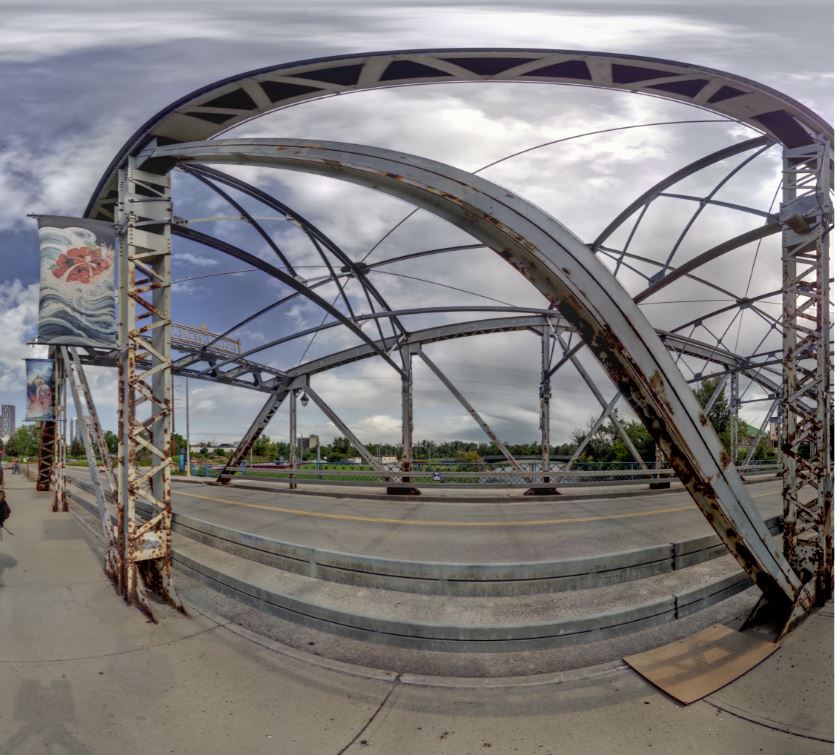 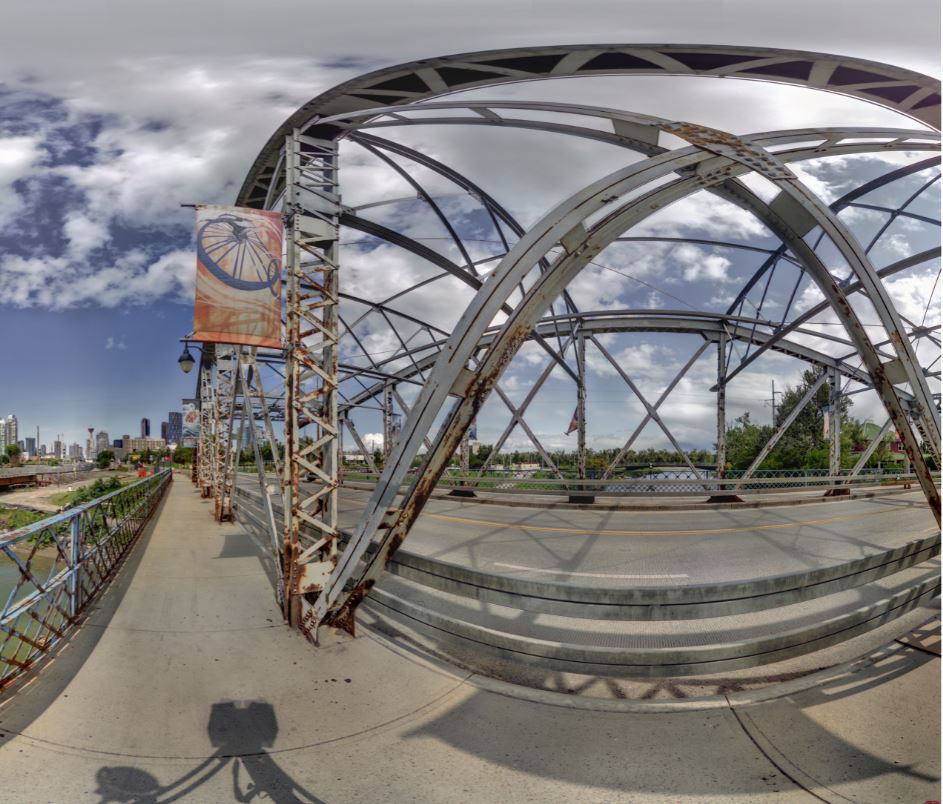 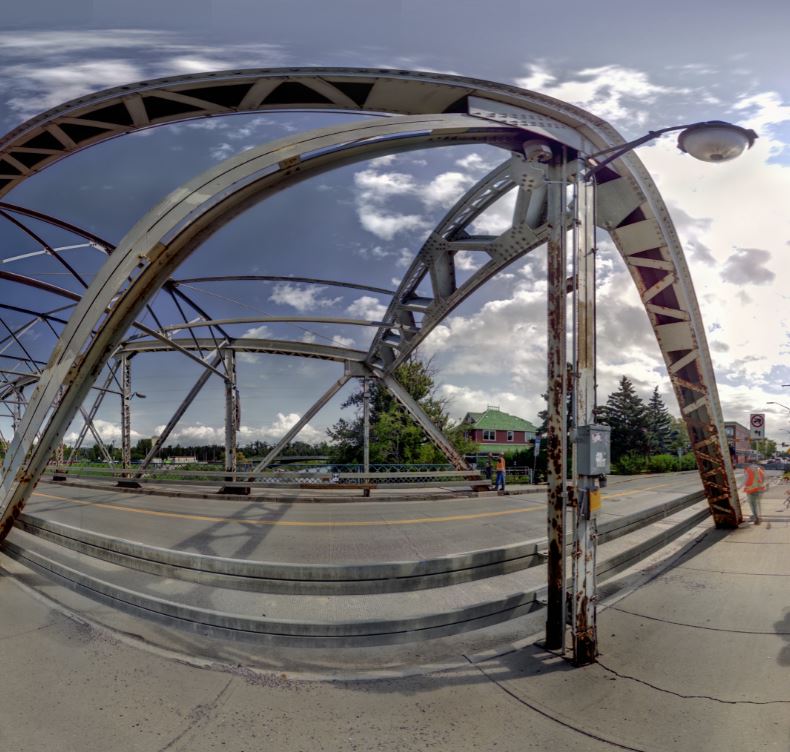 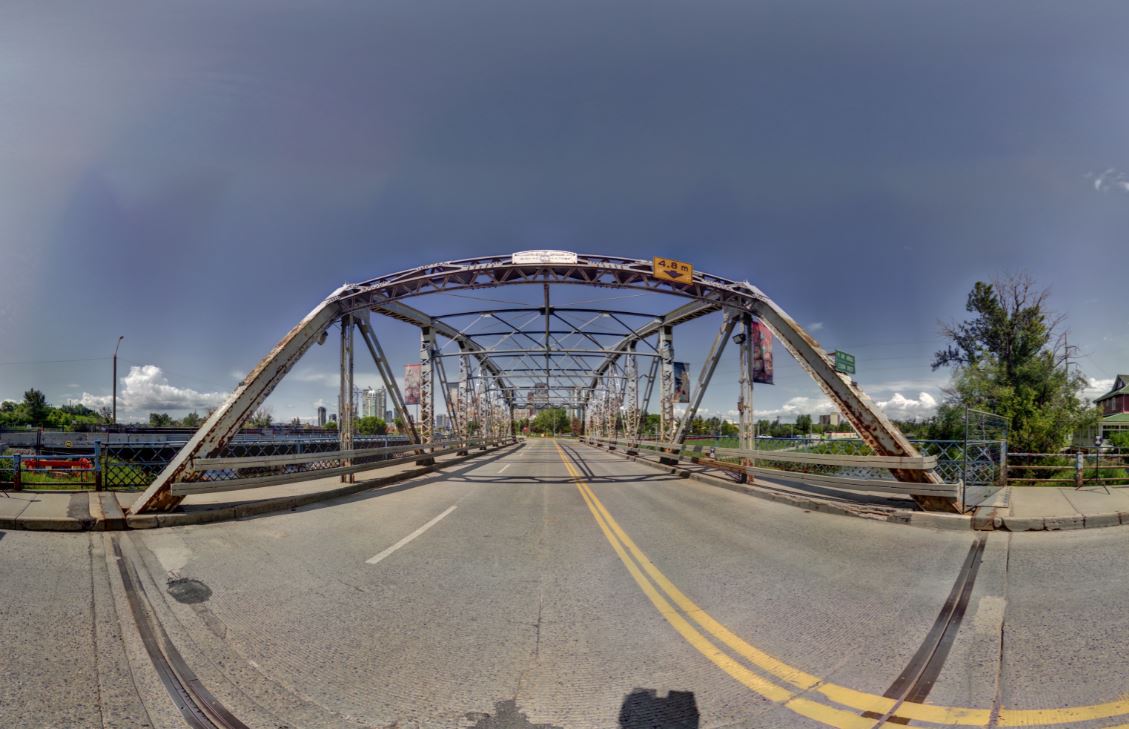 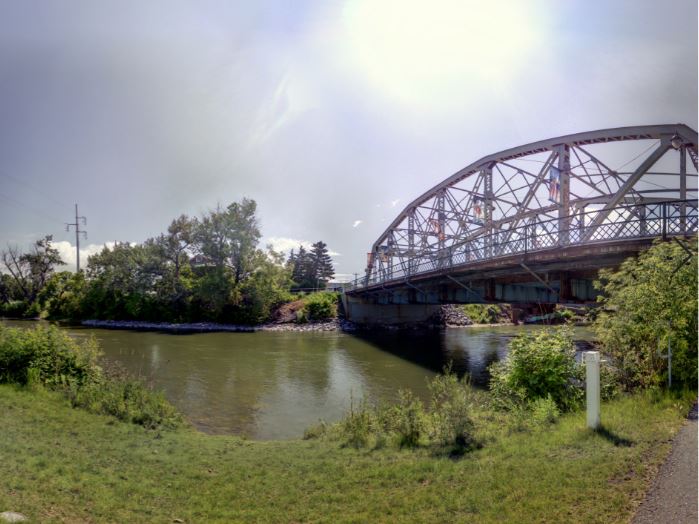 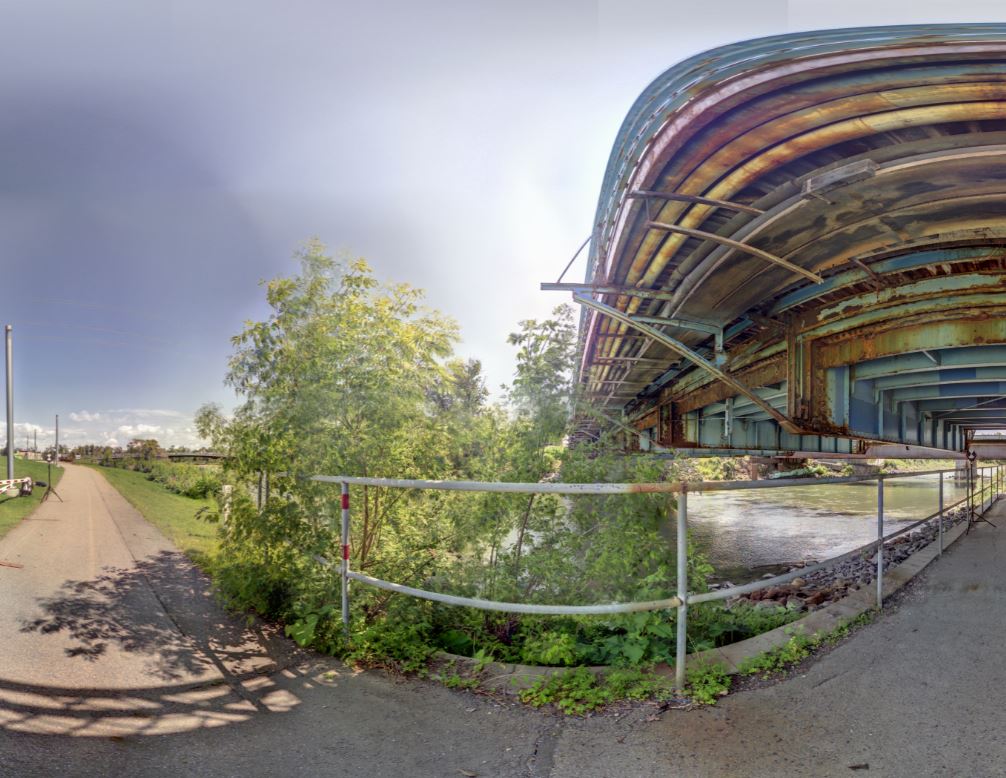 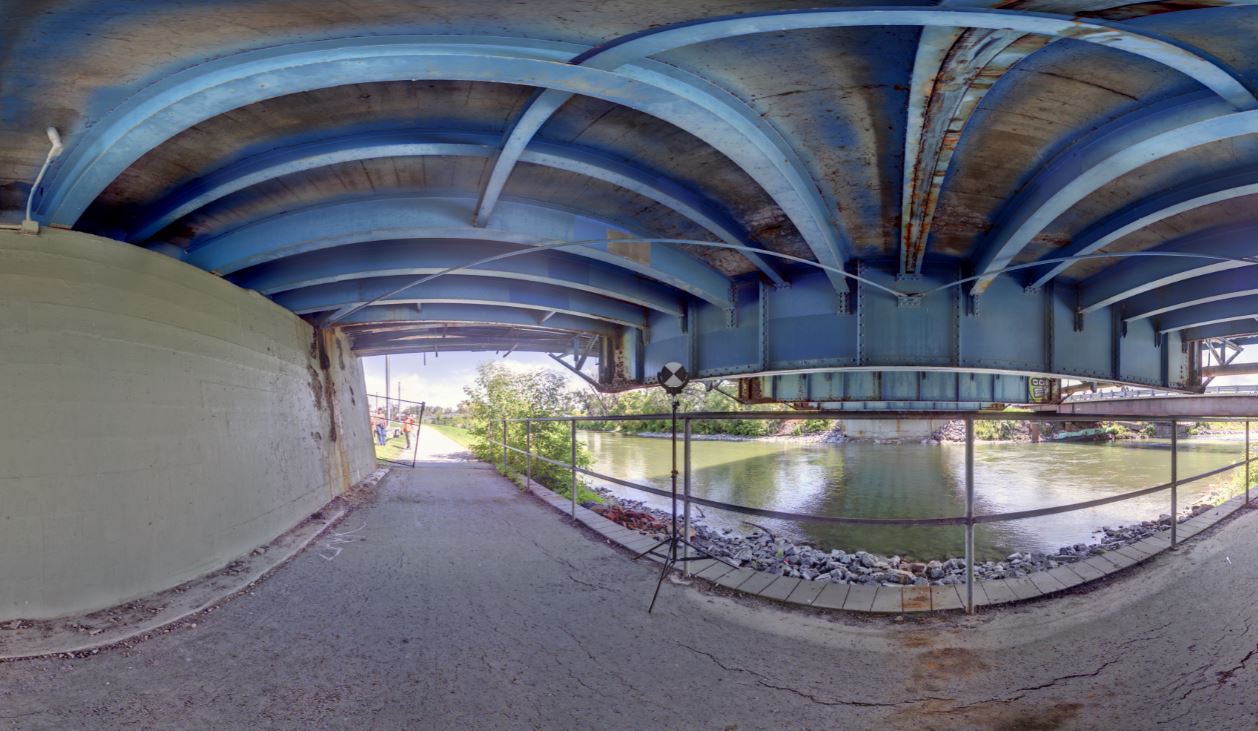 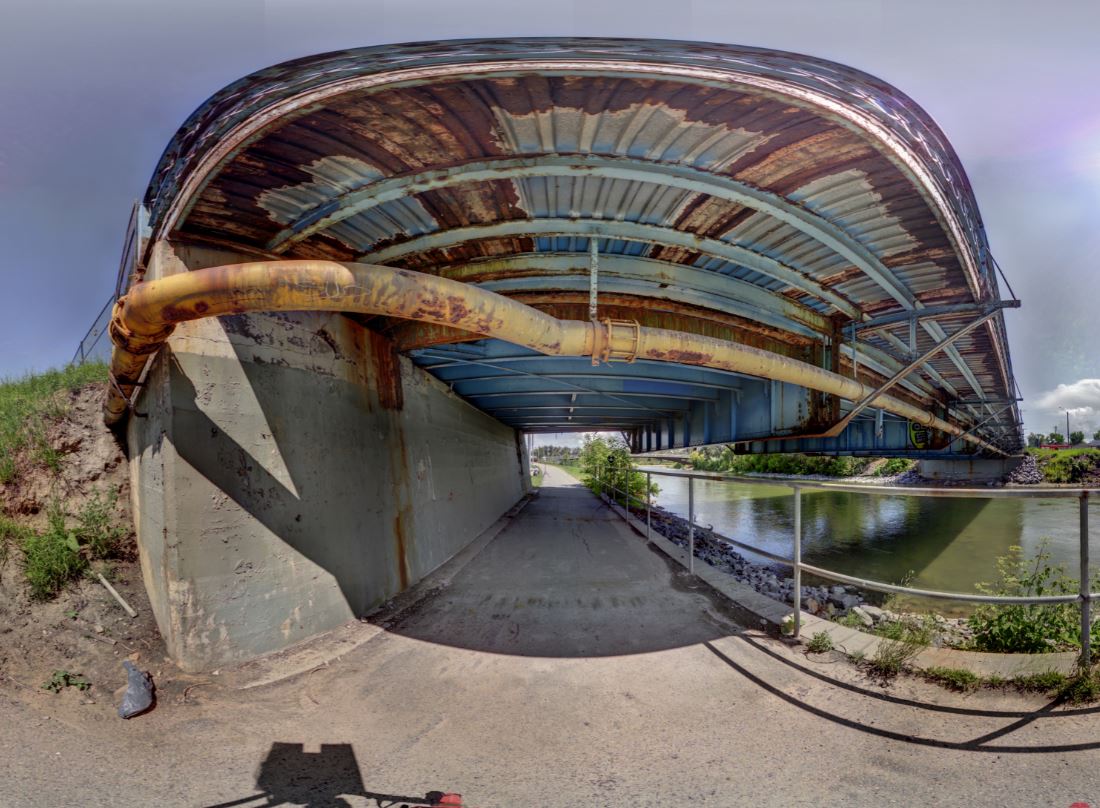 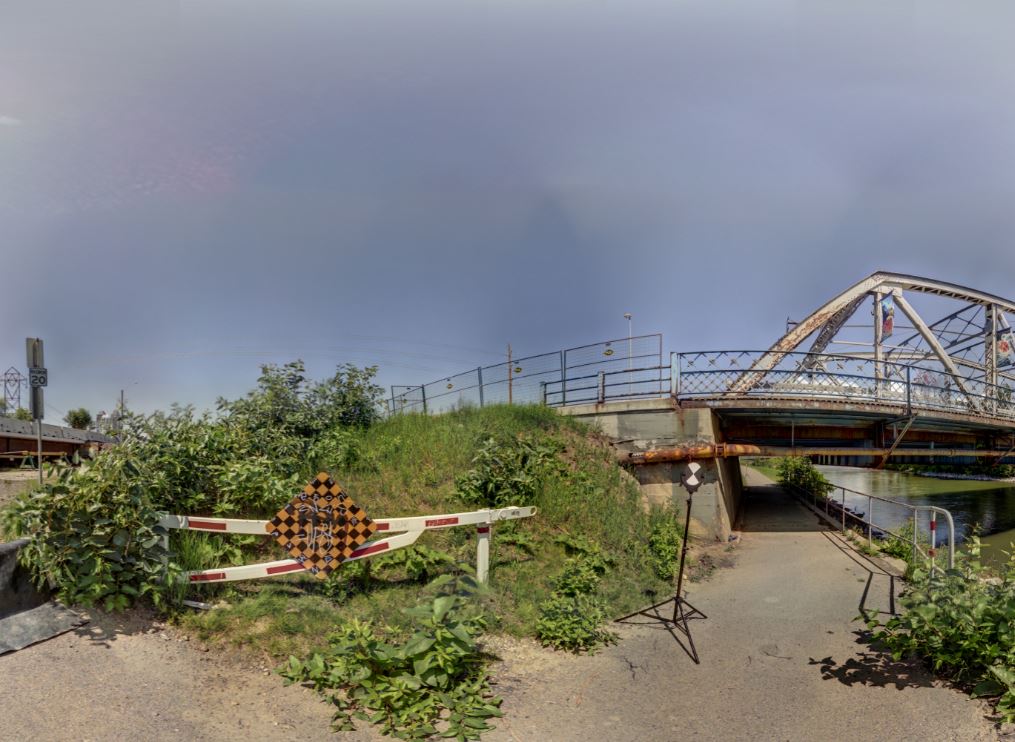