Calgary’s first European settlement was in the area now called Fish Creek Provincial Park. First homesteaded by John Glenn, his original farm underwent multiple exchanges and transformations before being sold in 1902 to Patrick Burns, one of the Big Four ranchers famous for starting the Calgary Stampede and one of the wealthiest people in Canada at this time. Under his control what was now called the Bow Valley Ranch hit its heyday. One of the upgrades made to the ranch during this time was the addition of a “Jobber’s” house in 1918, used as accommodation for the ranch’s “Jobber” or head herdsman. Along with the original ranch house, the Jobber’s House still stands on the property and represents this important developmental period of Calgary’s history. Still largely reflecting how the house looked at its last occupation in the 1950s, the interior and exterior of this structure were documented by terrestrial laser scanning in May 2019 prior to scheduled renovations.

The first European to settle in what would become the City of Calgary was John Glenn. Born in Mayo County, Ireland in 1833 Glenn immigrated to the United States of America at the age of 16 [1, 2, 3]. Subsequently he found employment on ranches and fought in the Civil War before moving to Canada in 1867 to pan for gold in Bakerville, BC where he worked alongside future Calgary residents James Votier and Sam Livingston [1, 2, 3]. By 1873 at the age of 40 Glenn decided to settle down and married Adelaide Belcourt, a Métis woman from Lac St. Anne. The two were married by Father Leduc in the St. Albert mission built by Father Lacombe, and then headed south to look for suitable land to settle on. Upon arriving at the confluence of the Fish Creek and the Bow River the couple were impressed by the fertile land and constructed a log cabin with a sod roof, stone fireplace, and chimney thus becoming the first settlers in Calgary [1, 2, 3].

In 1879 John and Adelaide moved upstream to raise their family of six children and their original homestead was sold to the Dominion Government where it became Indian Supply Farm #24 [1, 2]. In 1877 the Blackfoot Confederacy signed Treaty Number Seven, and with the goal of helping the Blackfoot adjust to their new way of life the federal government purchased many instructional farms like the one bought from Glenn. However, by 1880 the poor yields from the farm no longer justified the costs of running it and the government sold the Fish Creek Supply Farm to Theodore Robitaille, Quebec’s Lieutenant Governor [1, 2]. Robitaille planned to sell sub parcels of the land for a profit, but the western market had collapsed ruining his plans. Without being able to subdivide and sell property, the land was leased to John and William Roper Hull in 1887 [1, 2].

The Hull brothers had learned about the cattle industry working on their uncle’s farm in British Columbia, and by the time they bought the Fish Creek Supply Farm the Hull Brothers Company was a major force in the ranching industry. The brothers purchased the ranch from Robitaille in 1892 and John transferred his holdings to William in 1893, making him the sole owner of the Bow Valley Ranch. Irrigating the fields and increasing the yield of hay from 90 tons to 1,200 tons by the third year and implementing an innovative hay-stacking machine, Hull’s farming methods became famous across Canada [2]. Dignitaries from across the country visited the ranch; on tour together, Prime Minister Mackenzie Bowell and Senator James Alexander Lougheed were impressed by the property reporting the stalks of the oat fields to be over six feet tall [2]. Hull also cultivated an elegant class of Canadian ranchers, building the “finest country home in the territories” [2], the two-story brick Bow Valley Ranch house that still exists today.

In 1902 the ranch was sold to Patrick Burns, a dominant force in both the Canadian and global meatpacking and ranching industries, and one of the “Big Four” responsible for providing funding to start the Calgary Stampede in 1912 [2]. Burns was an incredibly successful and generous business man becoming one of the most important figures in Alberta’s history. At the height of his success he owned over 2,800 km2 of land in Southern Alberta, and as a small but important part of his empire, Burns operated the Bow Valley Ranch as a central holding and sorting site for cattle brought from other ranches on their way to the slaughterhouse Burns operated in Southeast Calgary [4]. By 1914 Burns had a global meat entity that sold beef, lamb, and pork at both national and international retail outlets with locations as far away as Australia [4].

It was under Burns’ success that the Bow Valley Ranch hit its heyday. In 1918 the ranch underwent several upgrades which included the addition of a 75-horse barn, subsequently destroyed by fire in the 1950s, as well as an accommodation house for the head herdsman, and subsequently the “Jobber” who was responsible for conducting repairs around the ranch [5]. The house itself was constructed as a nailed frame two storey structure with a gabled roof. The base of the second storey was constructed to be belled, and the main floor featured a half hipped open verandah and covered root cellar on the southwest corner [6].

The Jobber’s House as it is now known has been empty since 1957 but still stands on the property today. Through conversations between the Friends of Fish Creek Park Society and two brothers who lived in the house from 1949 to 1951 it was determined that the interior of the house has not been altered since its abandonment, even featuring the shower curtain bought in New Brunswick by the brother’s father Mr. Freeman Edgar [5].

The ranch stayed in the Burns’ family until it was sold to the provincial government in 1972, and Fish Creek Provincial Park was opened three years later [2].  The Bow Valley Ranch was designated as a provincial historic resource in 2001, with the original ranch house now operating as the Bow Valley Ranch Restaurant in its original location. The Jobber’s House itself stands in the park and is currently scheduled to be renovated by the Friends of Fish Creek Provincial Park Society to be reoccupied as a multi-functional meeting space [7].

Historical images were sourced from the Glenbow Archives and Johnglen.ca. The modern images have been provided by the Capture2Preserve Team. 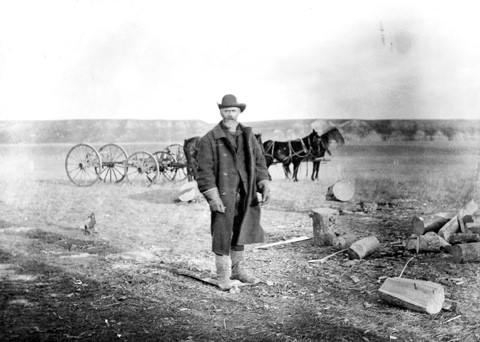 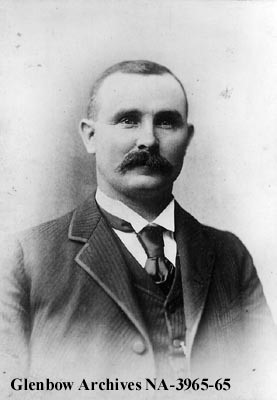 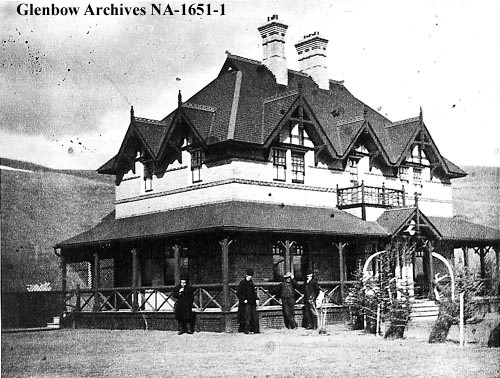 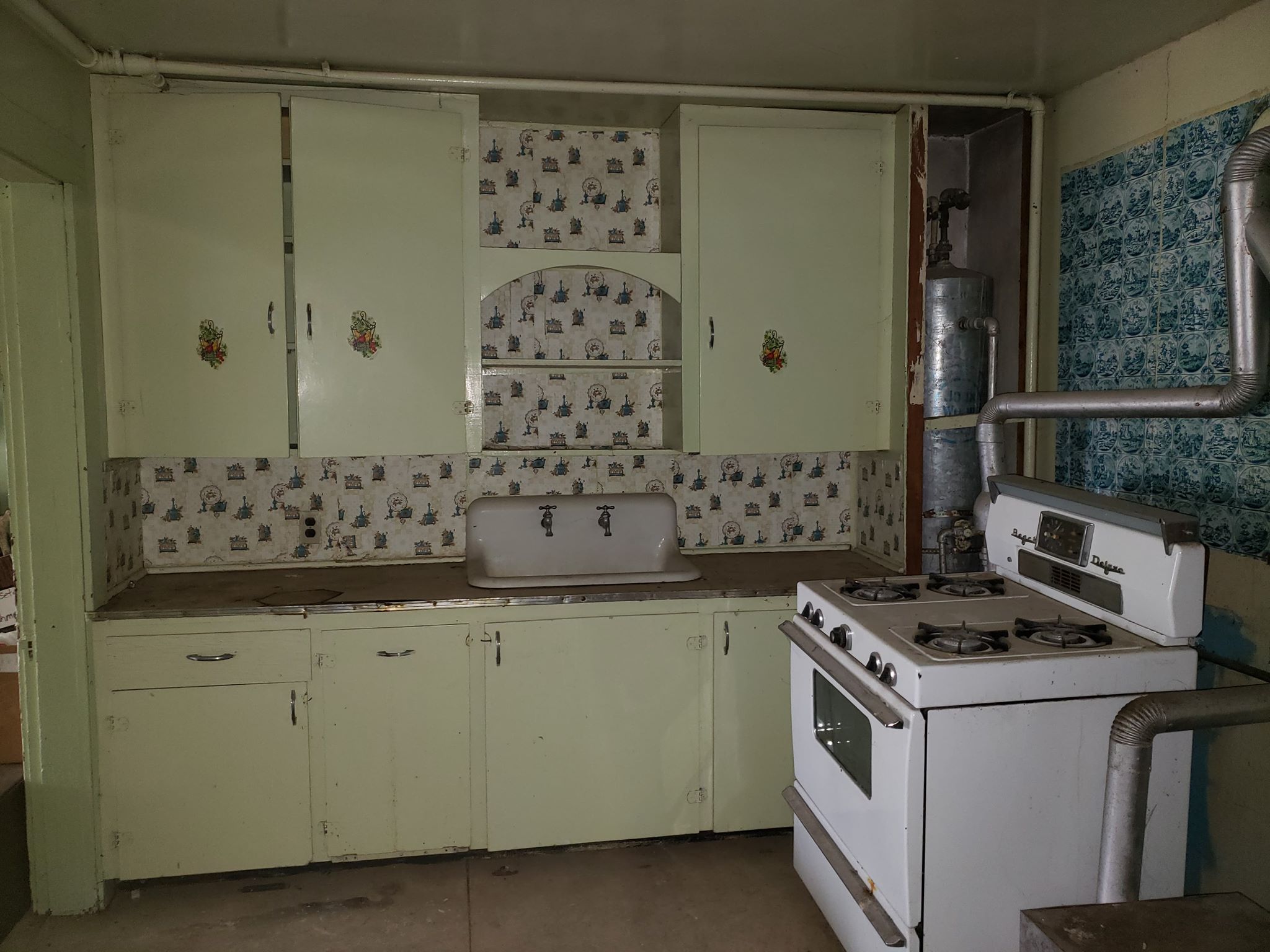 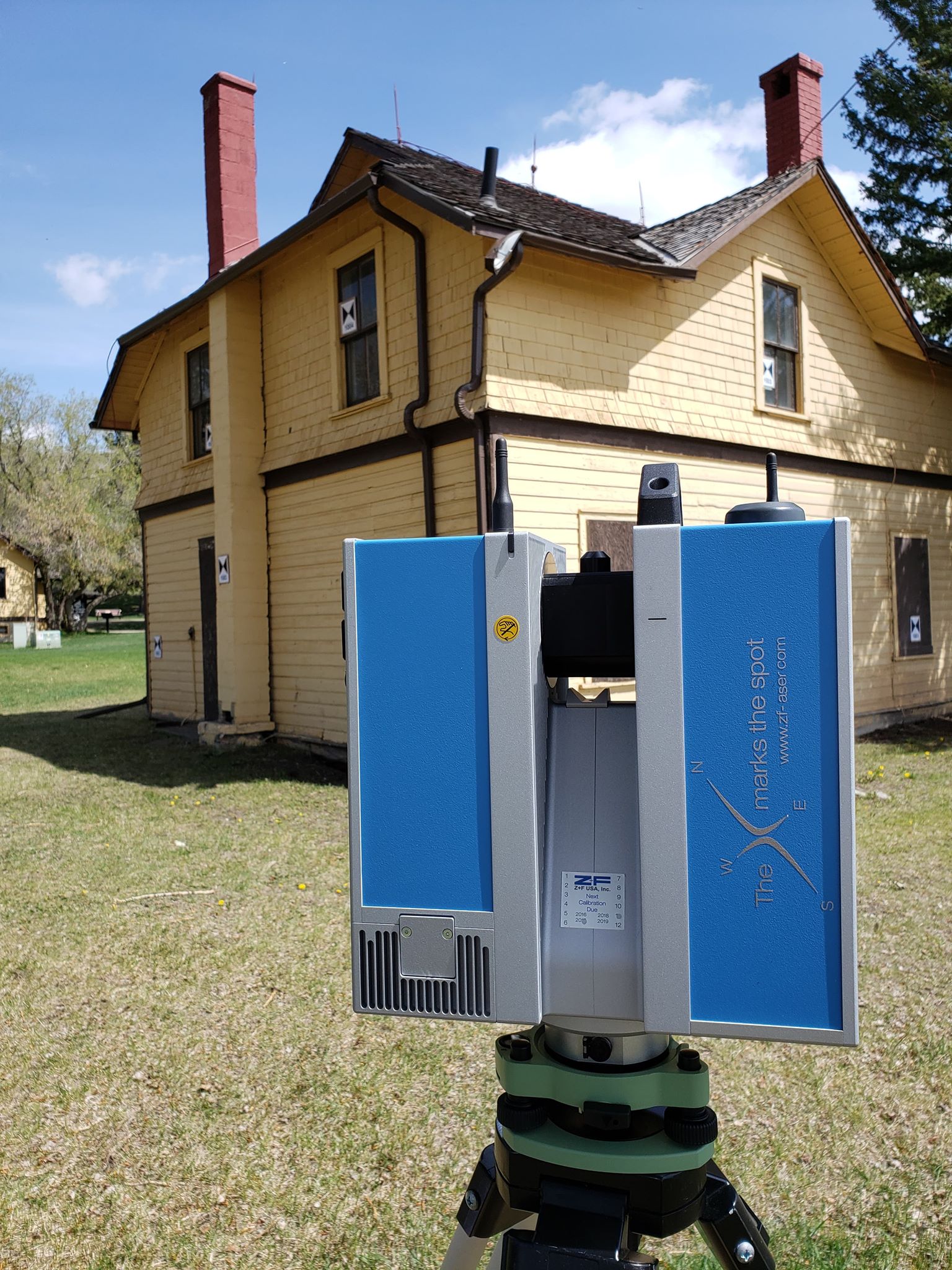 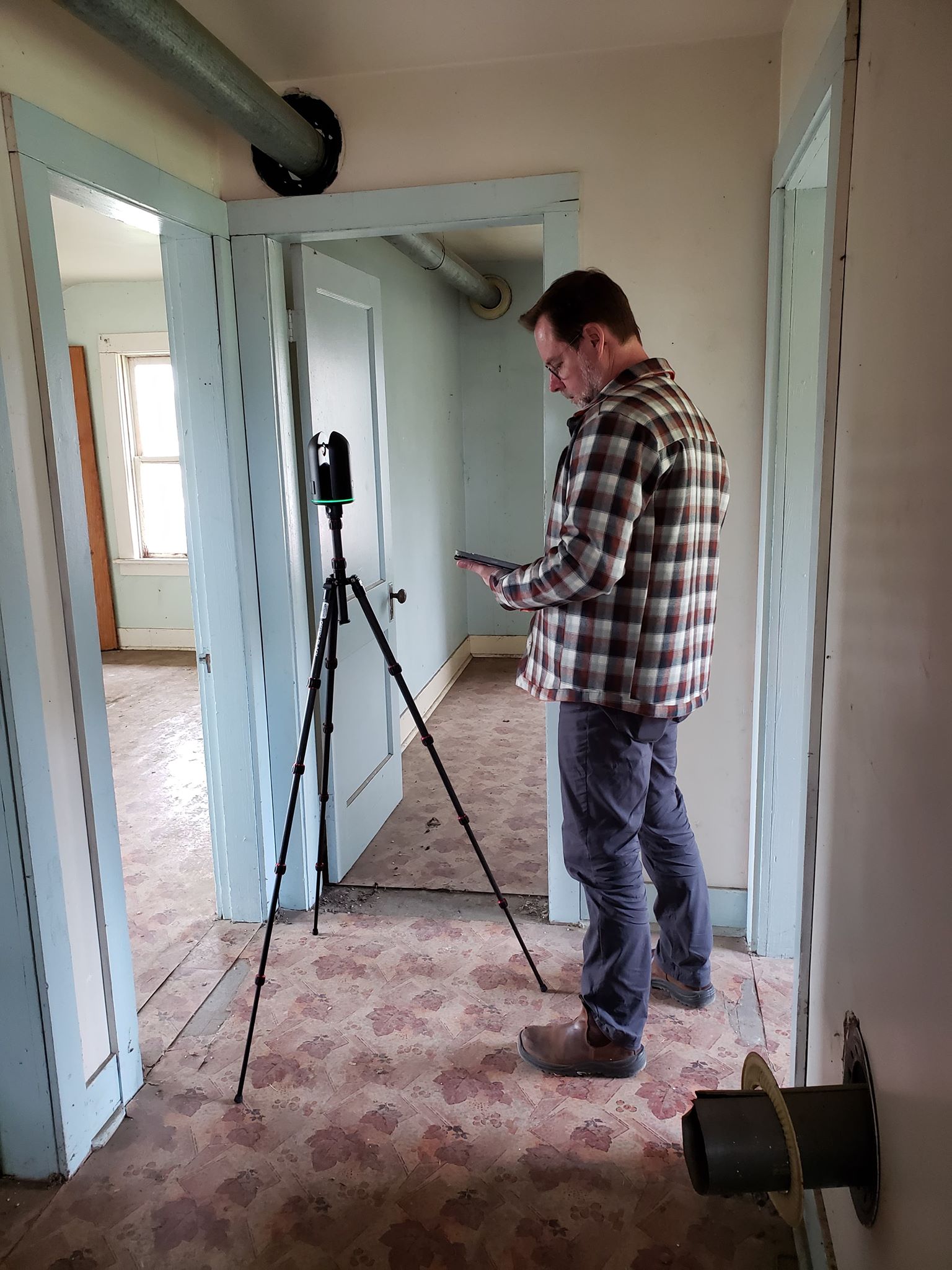 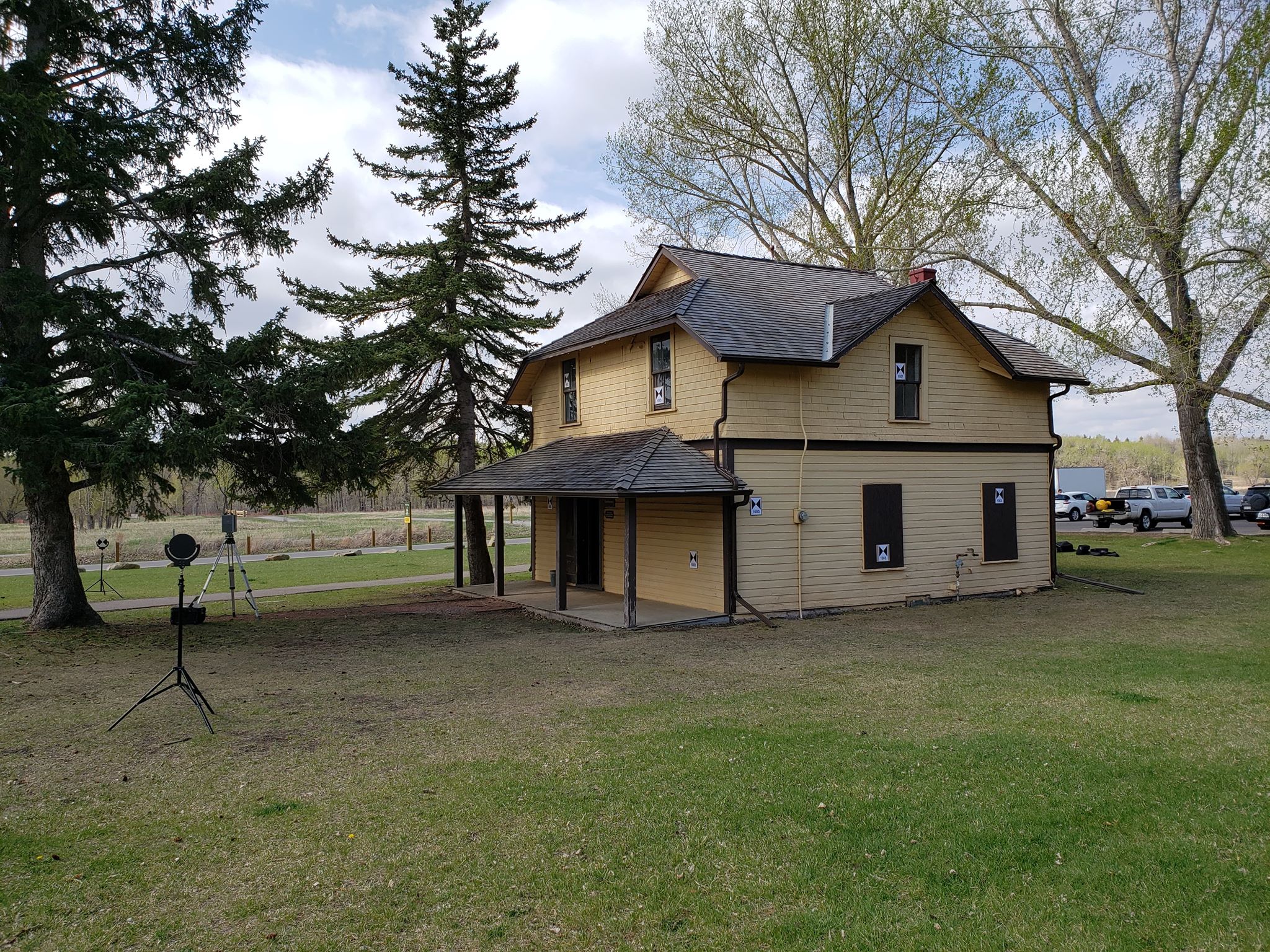 The Digitally Preserving Alberta’s Diverse Cultural Heritage project was approached by the Friends of Fish Creek Provincial Park society to digitally capture the Jobber’s House before it undergoes renovation. The exterior of the house was captured with the Z+F 5010x scanner, six paddle targets, and approximately 15 paper targets attached to the structure itself. The paddle targets were strategically placed around the building and external area, such that no less than three were visible in each scanning location. The 14 scanning locations covered  the outside of the building in a circular shape. The exterior scan was registered using Z+F Laser Control software and then exported into AutoDesk ReCap Pro for further processing.

The interior of the structure was captured using a Leica BLK 360 scanner. No targets were used to capture the interior of the building, and scans were registered together using cloud-to-cloud registration in AutoDesk ReCap Mobile and Pro.

One of the issues with terrestrial laser scanning that can be seen within the data capture for this site is illustrated by the inconsistencies in the roof of this point cloud. The in-field registration process shows only a bird’s eye view outline of the area captured by the scanner, and thus the inclusion problems with the missed portions of the roof could not be noticed while in field. In future documentation projects, this issue can be addressed by adding additional scanning locations farther away from the structure to increase inclusion on higher elevated portions of the documented structures. 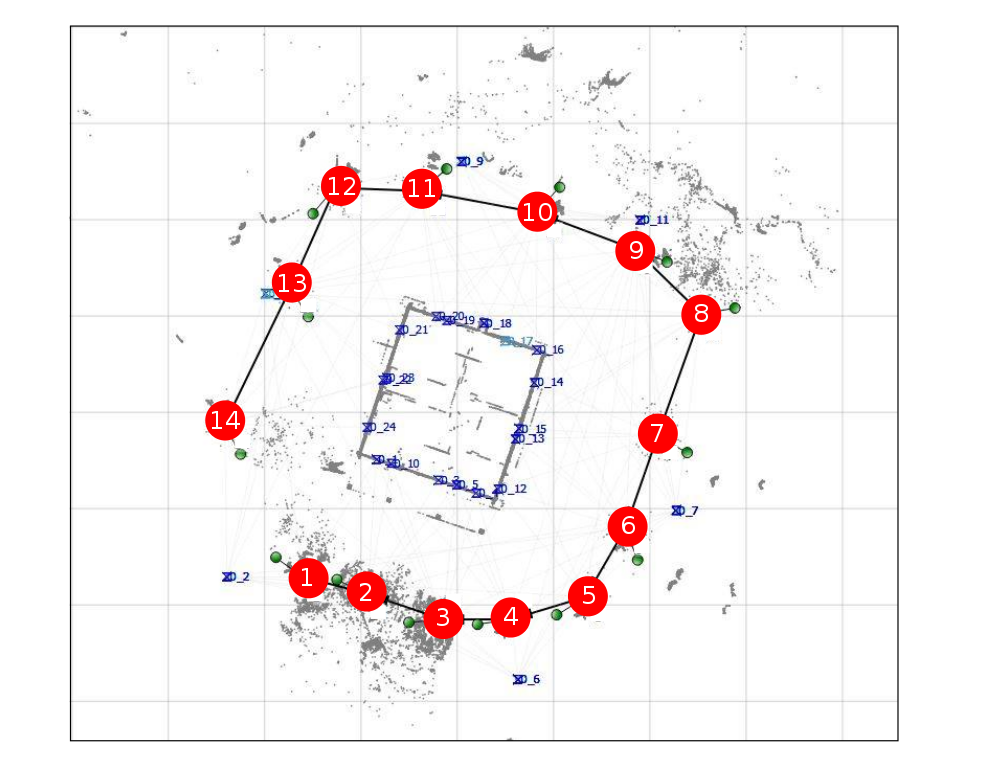 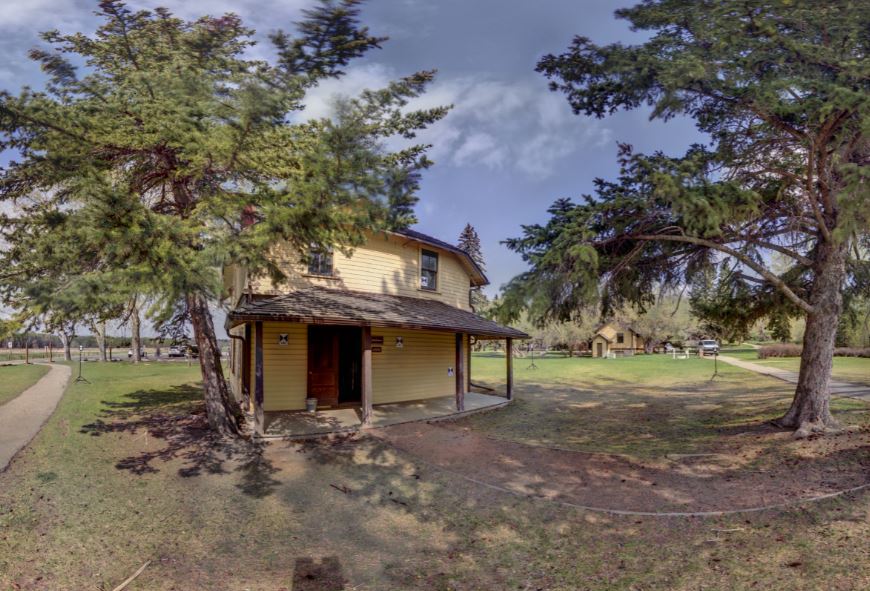 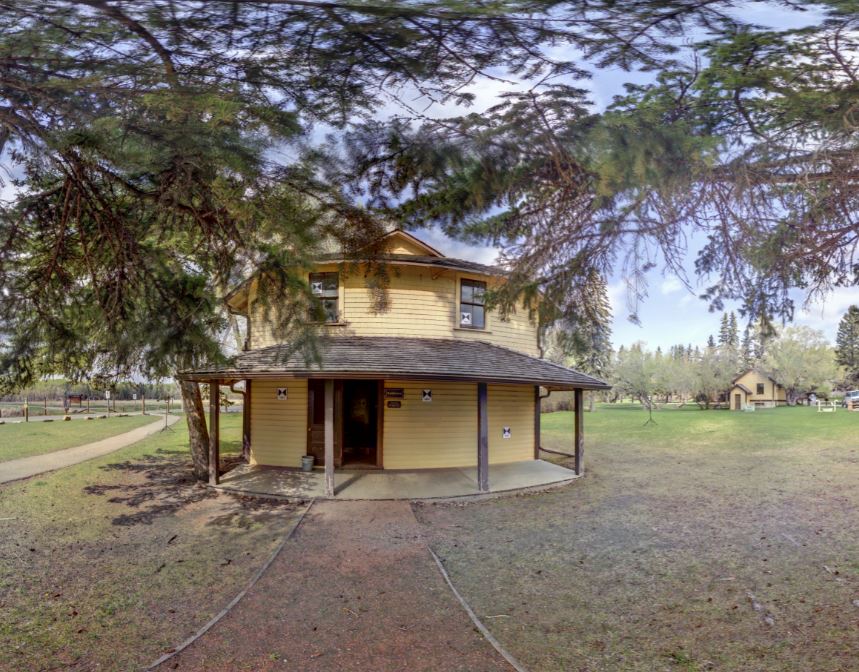 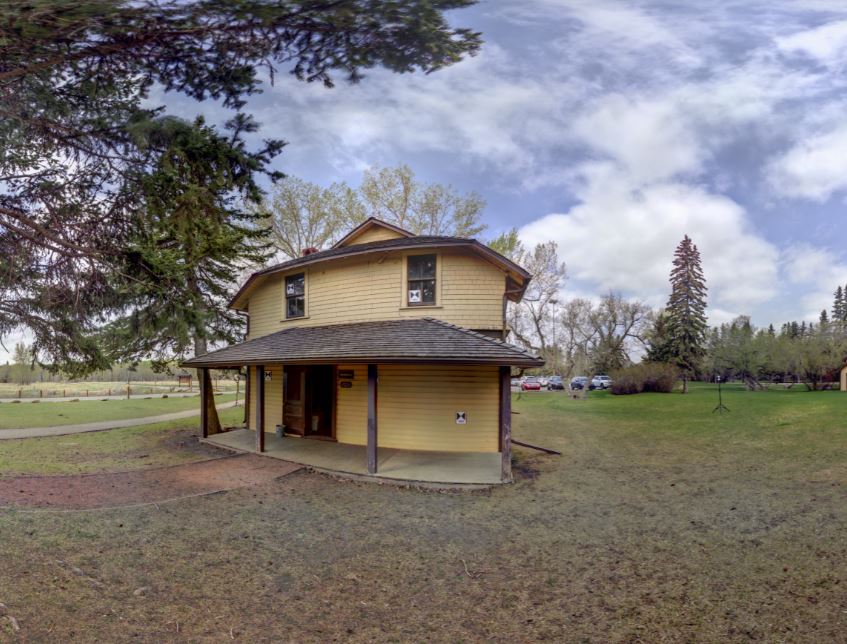 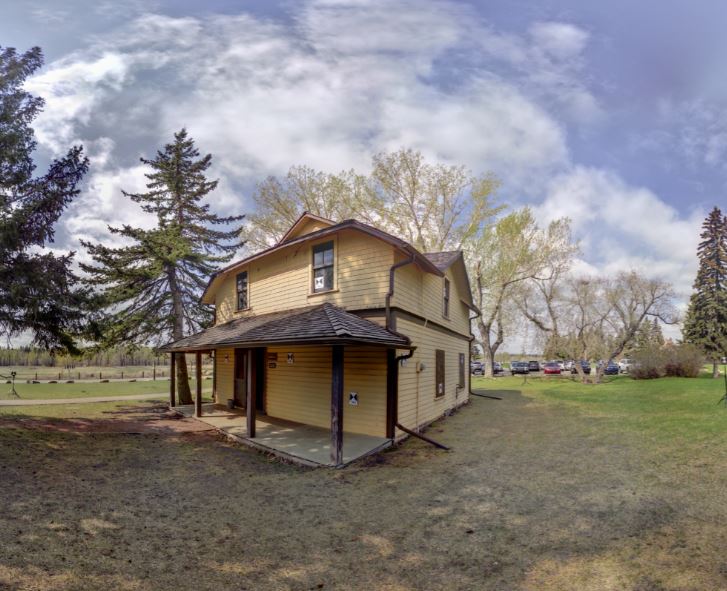 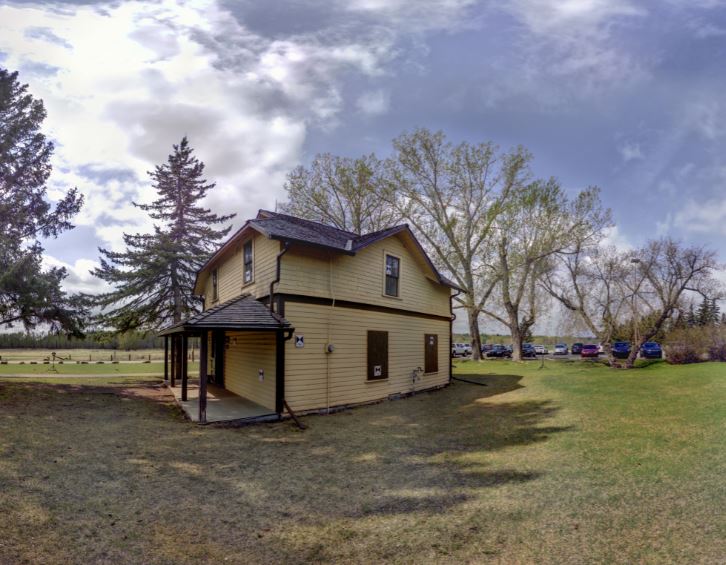 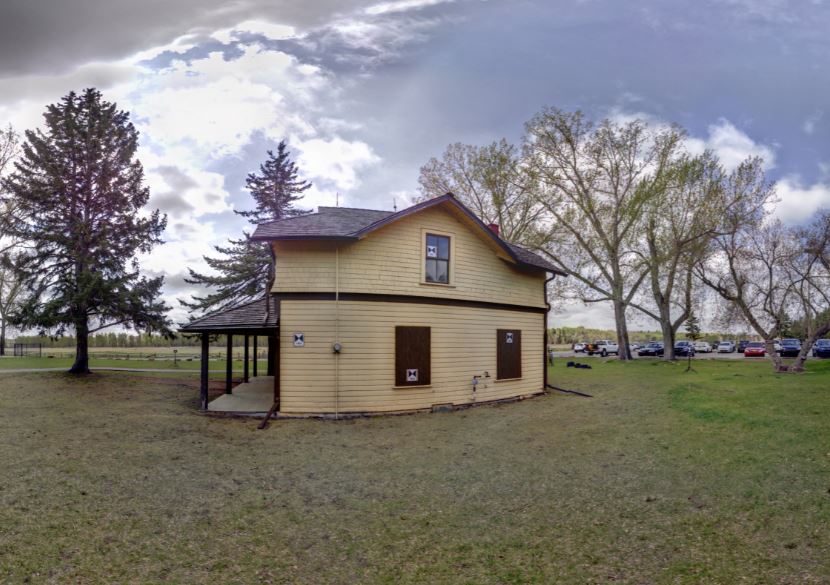 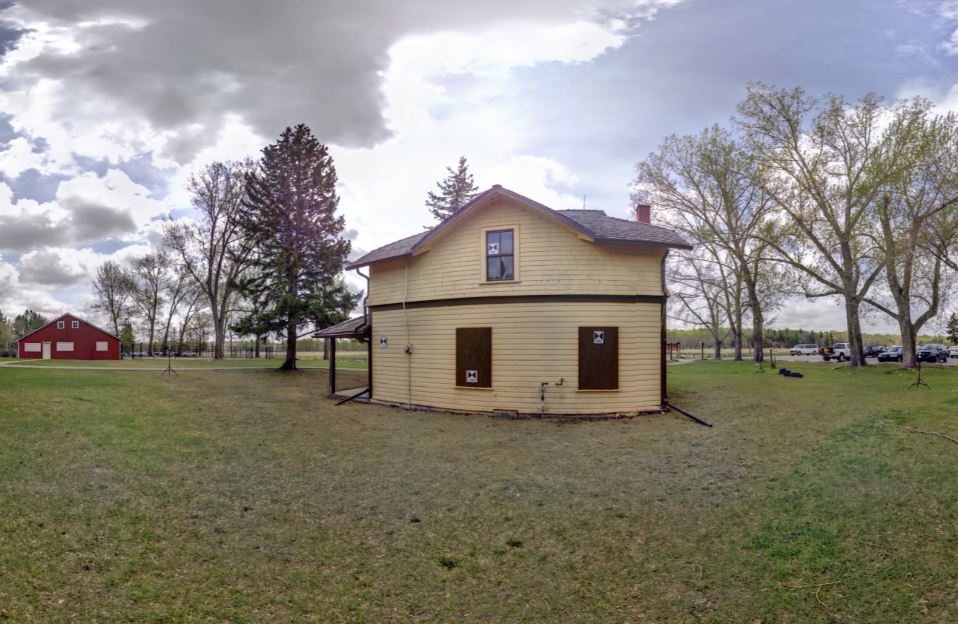 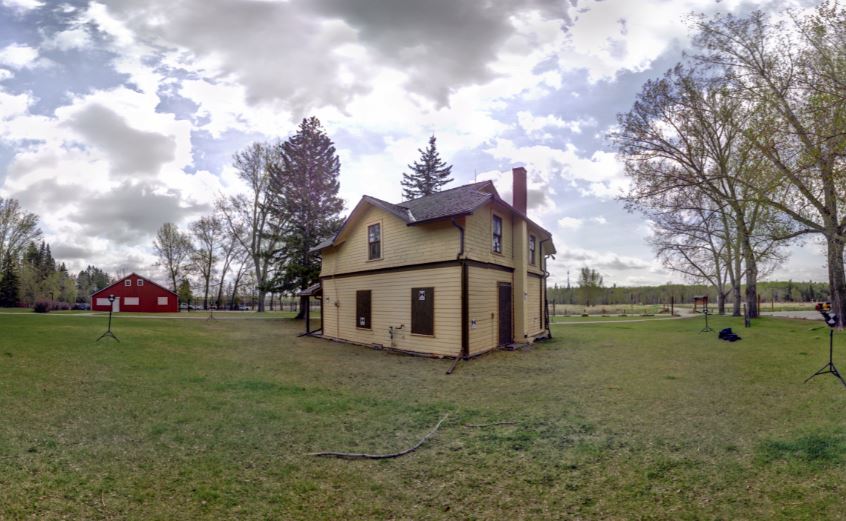 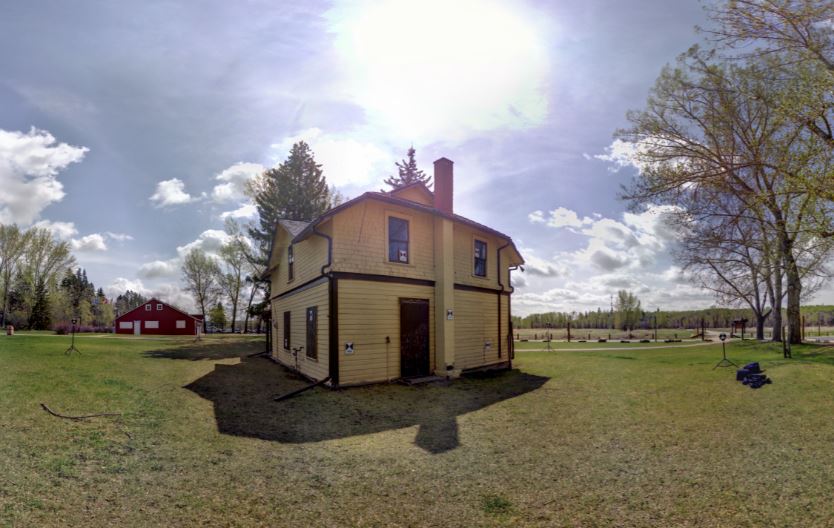 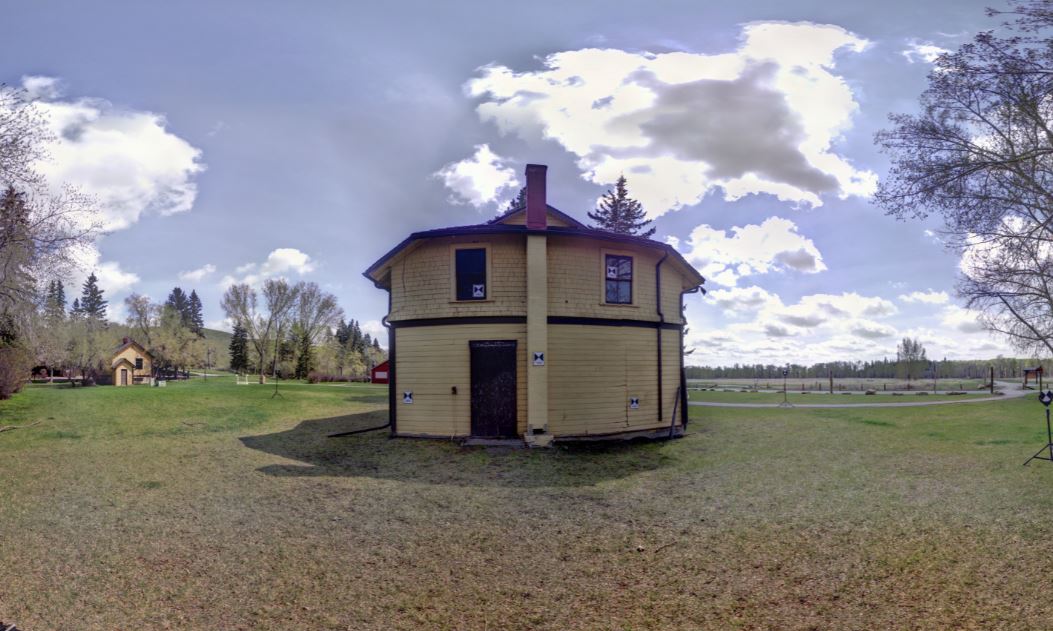 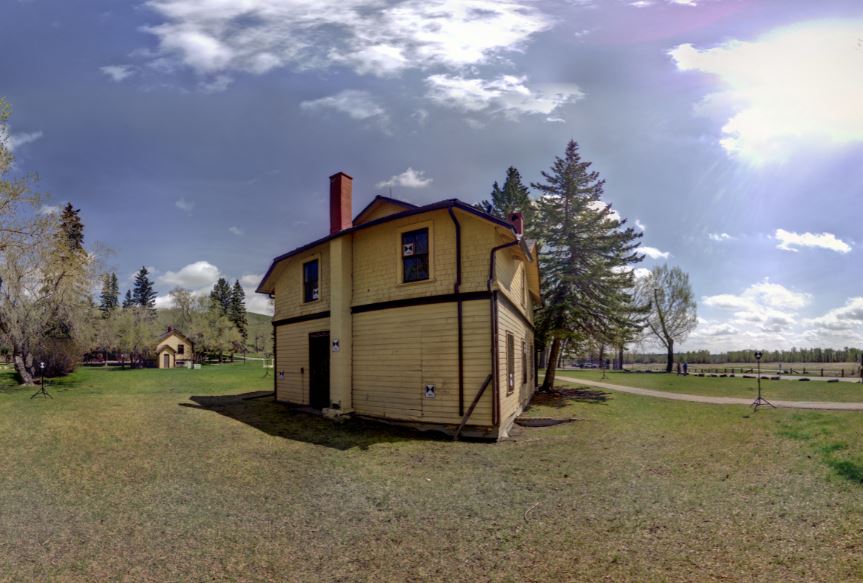 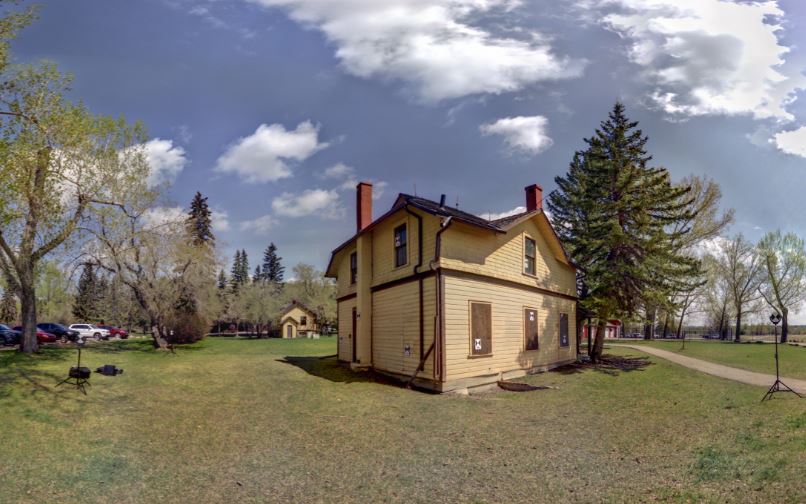 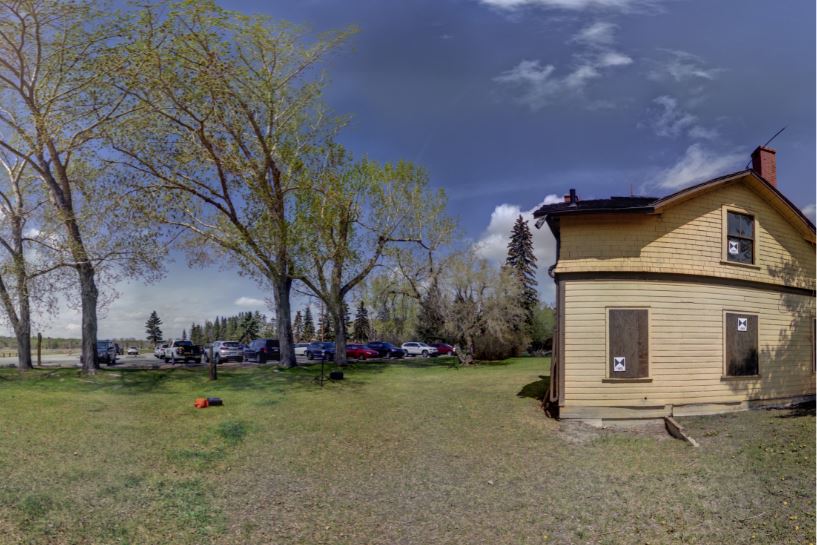 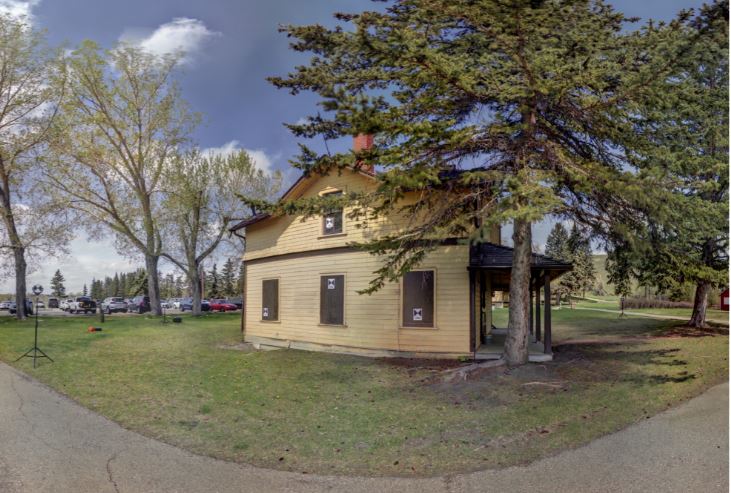