The Bazalgette Lancaster FM159 is one of the 7374 Avro Lancaster bomber planes produced by the Allied forces during WWII. This Lancaster was produced by Victory Aircraft Ltd in Malton, Ontario in 1945 and made it to England too late to serve in the war. It was flown back to Canada where it served in reconnaissance missions through the Canadian North for several years, until being decommissioned from service when it was bought to serve as a war memorial in Nanton, Alberta. Today the FM159 is the feature plane at the Nanton Bomber Command Museum.

The FM159 Lancaster is also known as the Bazalgette Lancaster, named after Squadron

Leader Ian Willoughby Bazalgette who was the only Albertan pilot to be recognized with the Commonwealth’s highest award for valour during WWII [1]. This plane is one of the 7374 Lancaster Bomber planes built to assist in allied efforts during the Second World War. As the war began and progressed, Britain found itself increasingly isolated and suffering from heavy air attacks [1,2]. Into the summer of 1940, British Prime Minister Winston Churchill threw his support behind the Royal Air Force’s Fighter Command and the development of the Bomber Command saying, “The Navy can lose us the war, but only the Air Force can win it” [1].

To meet this call, aircraft designer Roy Chadwick began refining the plans to his prototype Avro Manchester plane model that was prone to engine failure [1]. Through changing the engine design and adding 12 feet to the wingspan, the much more reliable Avro Lancaster was constructed and make its maiden flight in January 1941 [1].

It was decided that production of the planes would be more efficient and reliable away from the threat of Nazi bombing, and on September 18, 1941, a decision to build Lancasters in Canada was made [1,2]. By January 1942, the drawings for the plane arrived in Canada. In August of the same year, an Avro Lancaster was flown from Britain to Canada to be used as a “pattern,” and the Crown Corporation Victory Aircraft was formed to construct these plans in Malton, Ontario [1].

Victory Aircraft Ltd built a total of 430 planes during its operation. Production peaked in the first quarter of 1945 when nearly ten thousand people were employed, and production averaged one aircraft a day [1,2]. It is uncertain exactly when the Lancaster FM159 was built, but it was likely in May of 1945. However, even as production was increasing the war in Europe was beginning to ease. Avro Lancasters were still being produced at Victory Aircraft Ltd even as Britain began flying the plans back to Canada.

Lancaster FM159 was flown to England where it stayed for four months, and then was  flown back to Yarmouth, Nova Scotia to join the rest of the Lancasters in temporary storage [2]. However, there were concerns that the damp and salty weather conditions in Yarmouth would cause damage to the warplanes, so they were flown west to the prairies of Canada. Many of the planes, including the FM159, went to the former training base at Pearce, Alberta, just northeast of Fort MacLeod. Here, the planes that weren’t being used were offered for purchase to farmers for a couple hundred dollars each, and those sold were stripped for parts to be usable on the farms.

The FM159 escaped this fate and instead began in 1953 to serve as a maritime reconnaissance aircraft, searching for submarines around Canadian waters [2]. This service first began based out of Nova Scotia, but then the FM159 was flown west to Comox, BC, where it was flown on a variety of missions within Canada between 1954-1958. The Lancaster was flown to a base outside of Vulcan, Alberta where the engines were removed and it awaited being scrapped [1,2].

The luck of the Lancaster nevertheless held out, and in 1960 George White from Nanton, Alberta had the idea of buying the Lancaster to set up a war memorial. With the help of partners Howie Armstrong and Fred Garratt, the FM159 was purchased for $513 [1,2]. Since the original engines had been removed and the plane was too wide to travel on roads, the only way to bring the plane to Nanton was to tow it across the prairie. Permission was obtained from famers to cross the fields once harvest was done, and with one crew to take down fences ahead and one to right them after the plane passed, it was brought into the Town of Nanton [1,2].

Here, it sat next to the highway for several years. For the next 25 years, the plane was subject to both vandalism and repair efforts undertaken by volunteers. In 1885 George White wrote an article in the Nanton News asking if anyone was interested in helping to “take care of the bomber,” and the Nanton Lancaster Society was formed [2]. By 1991 a museum building had been erected, and the FM159 was brought into its new home. From here, volunteers of various backgrounds began dedicating time to repair the bomber.

Today the FM159 is the main feature of the Nanton Bomber Command Museum, which has since acquired and restored numerous other aircraft as well. The FM159 is a unique feature of this museum as it is the only Lancaster Bomber that allows unsupervised visitor access to the interior of the plane and is one of only four Lancaster Bombers in the world that has running engines [3].

In May of 2021, the FM159 was digitally documented by request of Valour Canada and the Bomber Command Museum of Canada.

This photo gallery shows historic and modern photos of the FM159. Images for this gallery were sourced either from the Bomber Command Museum of Canada or from the Capture2Preserv project. 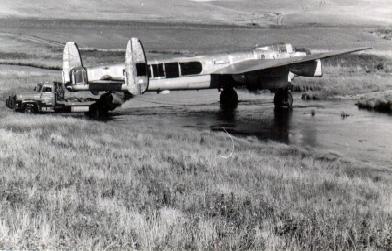 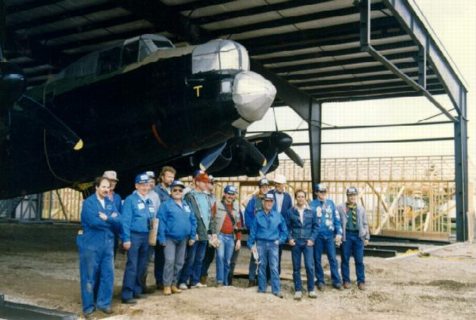 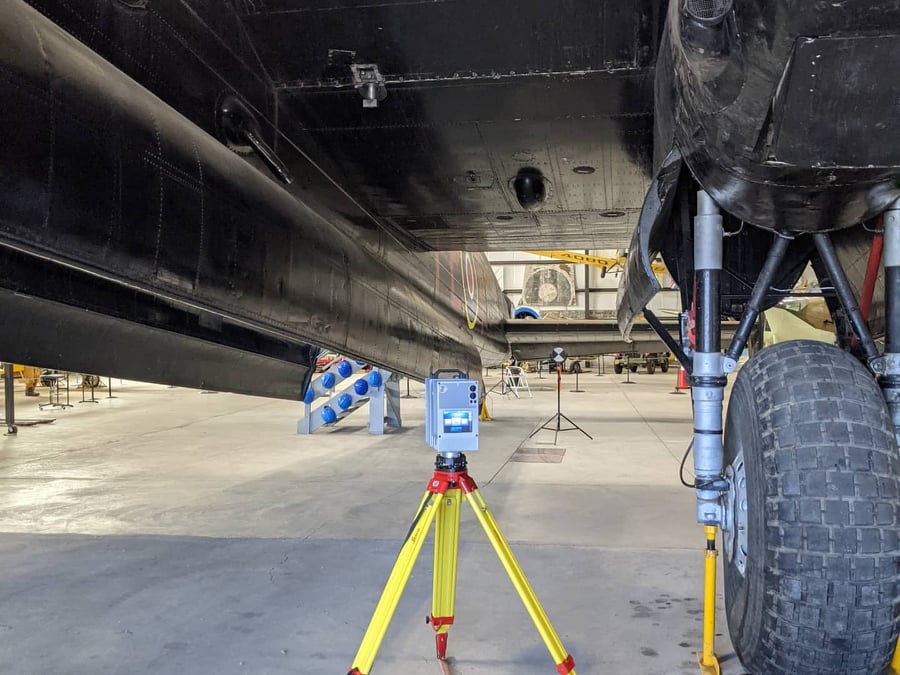 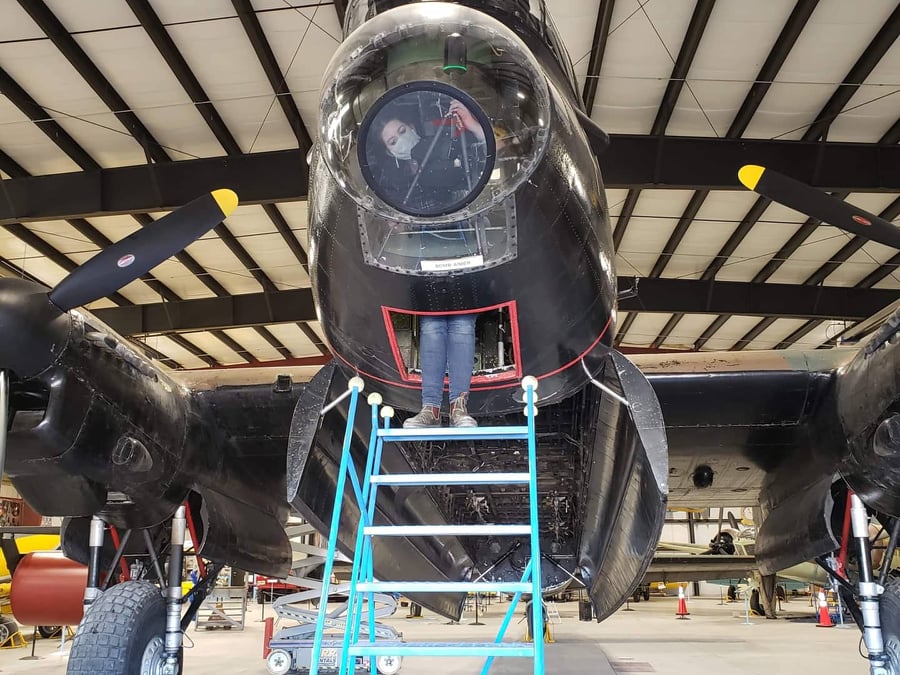 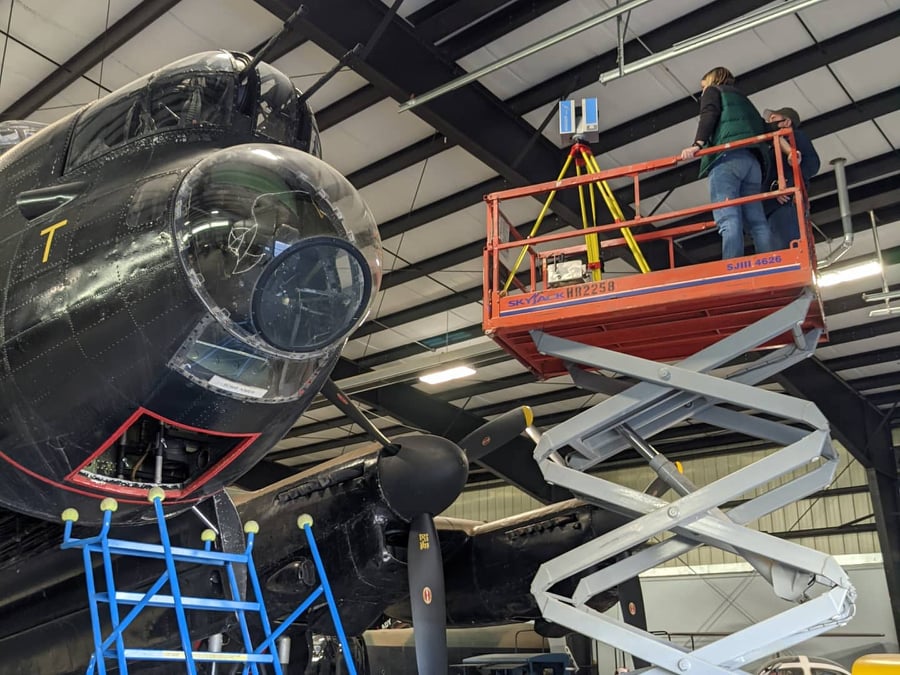 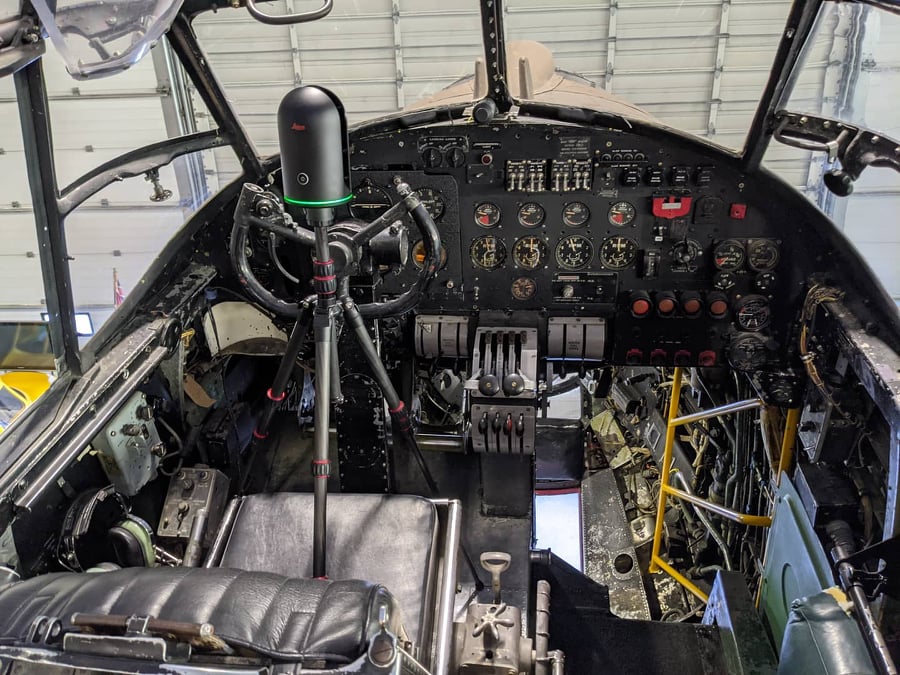 The Capture2Preserv Team worked with Valour Canada and the Bomber Command Museum of Canada to record the Bazalgette Lancaster FM-159. The bomber was recorded with two laser scanners (Z+F 5010x and BKL 360). The Z+F 5010x was used to scan the exterior of the plane with 28 scan locations (represented by the red dots) and the BKL 360 was used for the interior with 37 scan locations (represented by the blue dots). Targets were placed around the outside of the plane to help with the registration of the scans. To capture the top of the plane the Z+F 5010X was placed on a scissor lift for red scan locations 25-28, with Capture2Preserv team member Kate Pexman and Dan Fox, a founding member of the Nanton Lancaster Society. The exterior scans were registered using Z+F Laser Control software, while the interior scans were registered in Cyclone Register 360 (BKL Edition). Both the interior and exterior scans were then exported into AutoDesk ReCap to register the two data sets together and for further processing. The resulting point cloud was used to create a detailed 3D model of the plane. 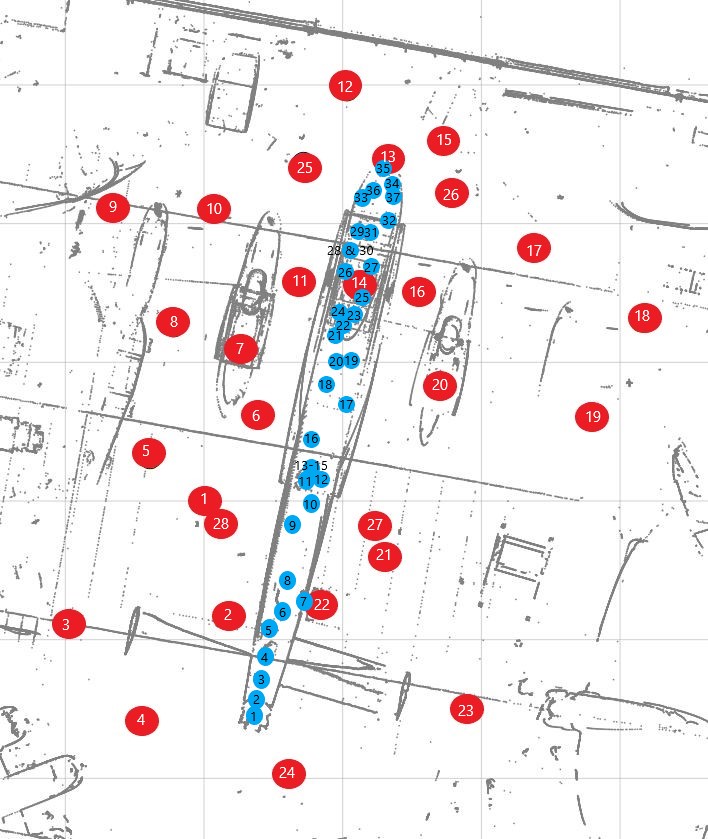 The raw data files for this project are available for download from the archive repository. Scans are .las file format. Please download the metadata template to access metadata associated with each file. All data is published under the Attribution-Non-Commercial Creatives Common License CC BY-NC 4.0 and we would ask that you acknowledge this repository in any research that results from the use of these data sets. The data can be viewed and manipulated in CloudCompare an opensource software.

Historical photograph of the Bazalgette Lancaster FM159 being moved to Nanton and the laser scanning data.