The North West Mounted Police (NWMP) Barracks, were constructed in 1884 replacing the original fort on MacLeod Island in the Old Man River (Est. 1874) due to flooding [4]. The buildings left of the NWMP Barracks represent the history of the protection of Canadian sovereignty of the West. As the first permanent station of the NWMP in western Canada Fort Macleod’s history is intertwined with the difficult histories of the whiskey trade, Indigenous relations, and European settlement in Southern Alberta. This survey was conducted to assist Alberta Culture and Tourism with the reconstruction and preservation of the harness shop (tag 4 in 3D model).

The Cypress Hills Massacre and the Formation of the NWMP

In the late 1800s Alberta was on the brink of becoming the great Canadian frontier. The Canadian Pacific Railway was constructing links across the continent to join Eastern Canada to British Columbia and the versatility of the environment for ranching and farming was becoming not only recognized but desirable. However, European settlement of the area brought with it increasing conflict with Indigenous populations; including the illicit trading between American whiskey traders and indigenous groups in western Canada exchanging bison robes, wolf skins, and other items for this American firewater [1].

This illegal trade particularly undermined Canadian authority west of Winnipeg and, without control, conflicts were becoming increasingly violent into the 1870s. This violence peaked at what is today known as the Cypress Hills Massacre [1, 2]. In the spring of 1873, 50 lodges of Assiniboine were camped in Cypress Hills, a wooded area in the Southern prairies that spans across the present-day border of Alberta and Saskatchewan [3]. With good access to water and sheltered from the open plains this area had been intensively used by First Nations for millennia. Although these hills were fairly well protected and difficult to reach from the north, by 1870 traders from Fort Brenton, Montana had moved into the area and in the spring of 1873 had two camps within close proximity to the Assiniboine lodges [3,4]. Groups of hundreds of Metís who had followed dwindling bison herds into the area were also camped in the surrounding forests [3].

After a long winter with trade provisions dwindling, relations between the Assiniboine and traders were bitter and tensions were high. Arriving then into this tense situation was a group of wolf hunters who had had their horses stolen by a First Nations group in the south, and had followed a trail north into Canada, eventually losing it and ending up in the Cypress Hills area [3,4]. What happened next varies by different accounts, but one of the trader’s horses went missing and the Assiniboine were blamed. The traders enlisted the help of the wolf-hunters to try to forcibly take a horse back and conflict erupted. Assiniboine women and children fled into the hills, while some members stayed to defend the camps. With all parties intoxicated, the Assiniboine were less well-armed than the traders and hunters; at least 20 of the Assiniboine were killed while only one wolf-hunter from the other side was [2,3,4]. Many of the Assininboine reached safety with the Metís in the hills and after the conflict the traders and wolfers returned south [3].

News of this conflict reached Ottawa in the fall of 1873 [3,4]. While there had already been reports of the negative effects of the whiskey trade on the Indigenous groups in the west, the Cyprus Hills Massacre reinforced the need of more urgent intervention [5].  In order to control the “rampant lawlessness” of traders and protect Canada’s sovereignty of the North-West Territories, the North West Mounted Police (NWMP) were established in 1874. The area that they would protect included all of present day Manitoba, and parts of Saskatchewan, Alberta, and the northern territories [2]

The Establishment of Fort Macleod

Lead by Colonel James F. Macleod, Fort Macleod was the first permanent NWMP post in the far west [1,5]. Established in October of 1874 the original fort was located on Macleod Island in the Old Man River Valley, a location a few kilometers east of the current town [1]. The fort was originally constructed at Fort Macleod following a similar layout as other NWMP forts across western Canada. The Fort was surrounded by a tall wooden fence and had multiple long buildings around an inner courtyard. When the NWMP troops arrived in October of 1874, hurried construction began on the fort with the motivation of the oncoming winter. Sod roofs and dirt floors composed the buildings that surrounded the square, 200 feet across in the middle of the fort. These buildings included a hospital, stables, living quarters, stores, a kitchen and a blacksmith shop [5]. The troops had no trouble finding building supplies, as the land was plentiful and relatively untouched. The fort was heated using stone fireplaces, but the living conditions were extremely poor for the weary troops. After a journey of over 1200 km the lifestyle at Fort Macleod looked bleak, some men even describing For Macleod as the worst fort they had ever seen [5].

The construction of the original fort was entirely completed by the 150 recruits who had traveled west in the first troop of NMWP [5]. These men were of all types, tradesmen, clerks, soldiers and farmers banded together to survive those first winters at Fort Macleod. Over the following years the living conditions gradually improved. The first plank floors and roofs were installed in 1876 when the first sawmill was established in Fort Macleod. The fort lasted in its original location on the island for only 10 years until the threat of floodwaters forced the NWMP to move the fort to higher ground on the banks of the river. During the move the fort was also increased in size to hold the ever-growing supply of troops, rising to almost 1000 men in 1886 [4].

In 1929 the majority of the police property was turned over to the Department of the Interior [5]. The parade grounds and original buildings were not well kept and had deteriorated over the years. Local ranchers and farmers purchased some of the buildings, and some were moved into their current location in the town of Macleod. The buildings that were left behind have been restored by Alberta Culture and Tourism and some of the buildings that were relocated to the town are now being bought back to the barracks site and restored to their original location within the barracks.

All historical images were sourced from the Glenbow Archives and modern images captured by the Capture 2 Preserve Team. 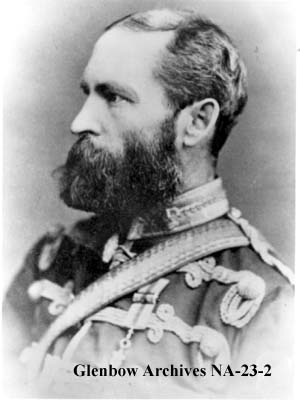 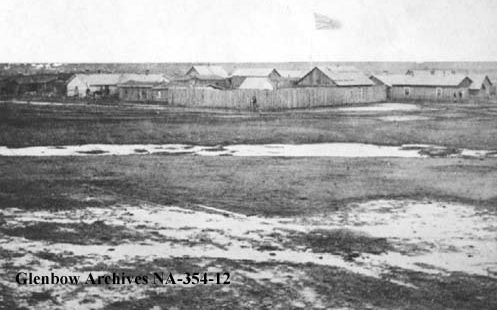 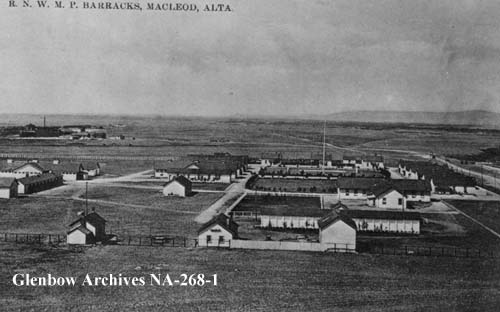 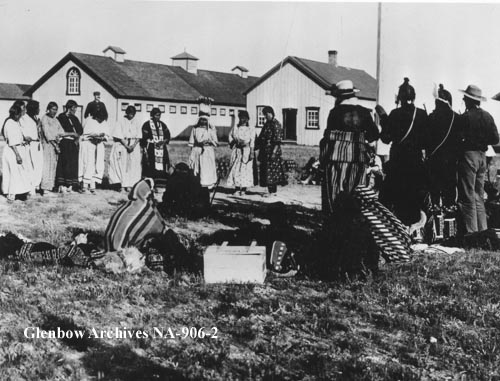 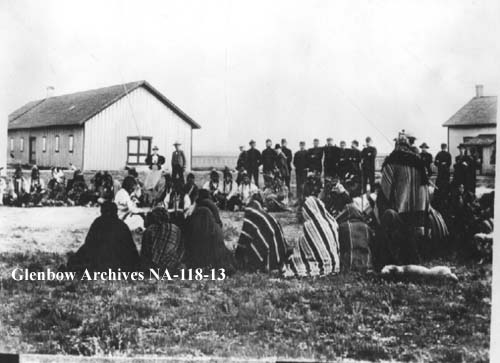 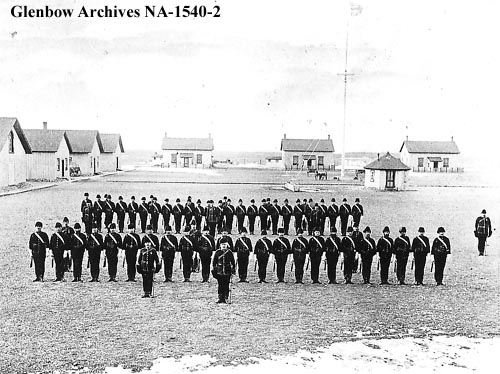 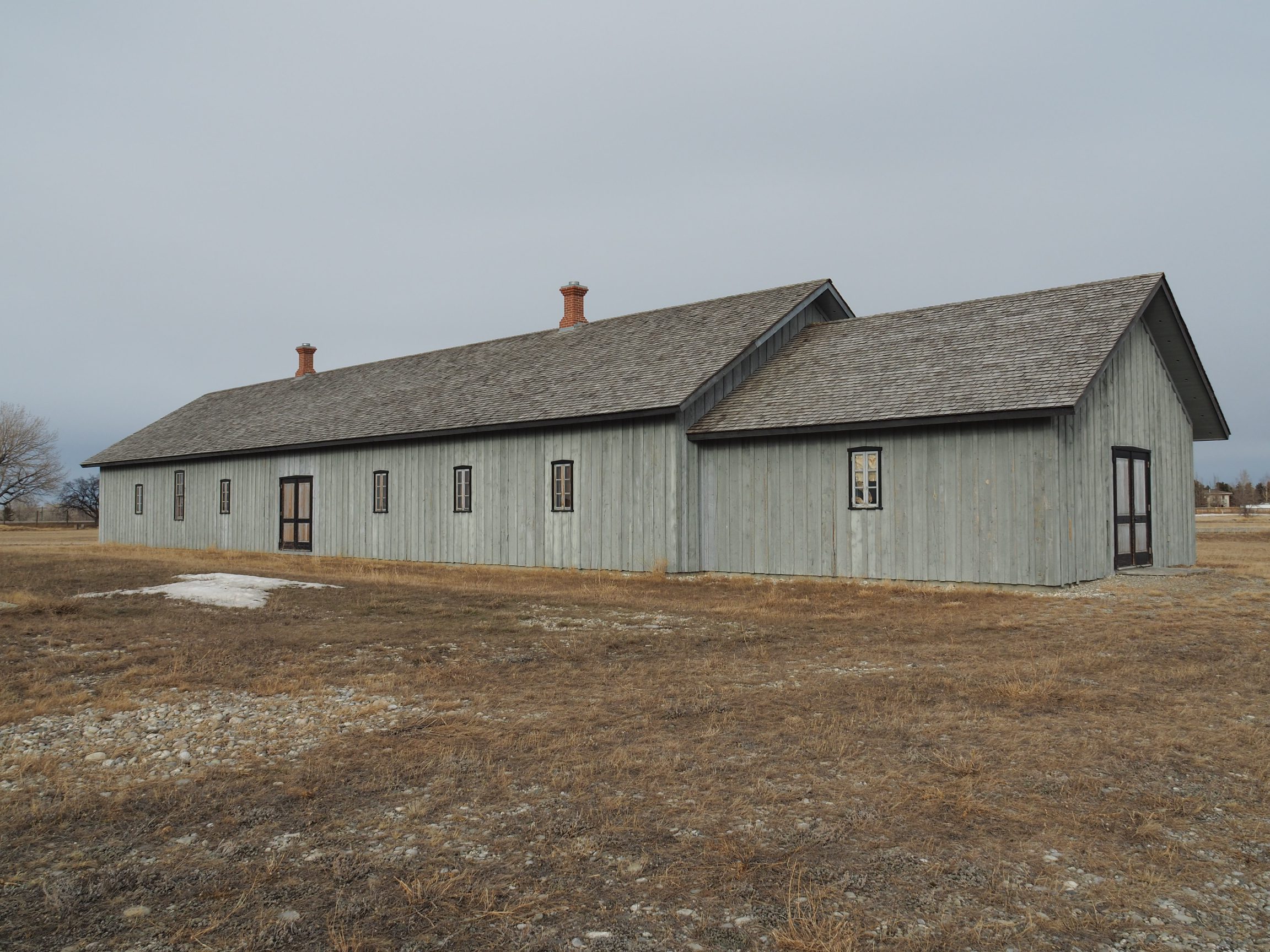 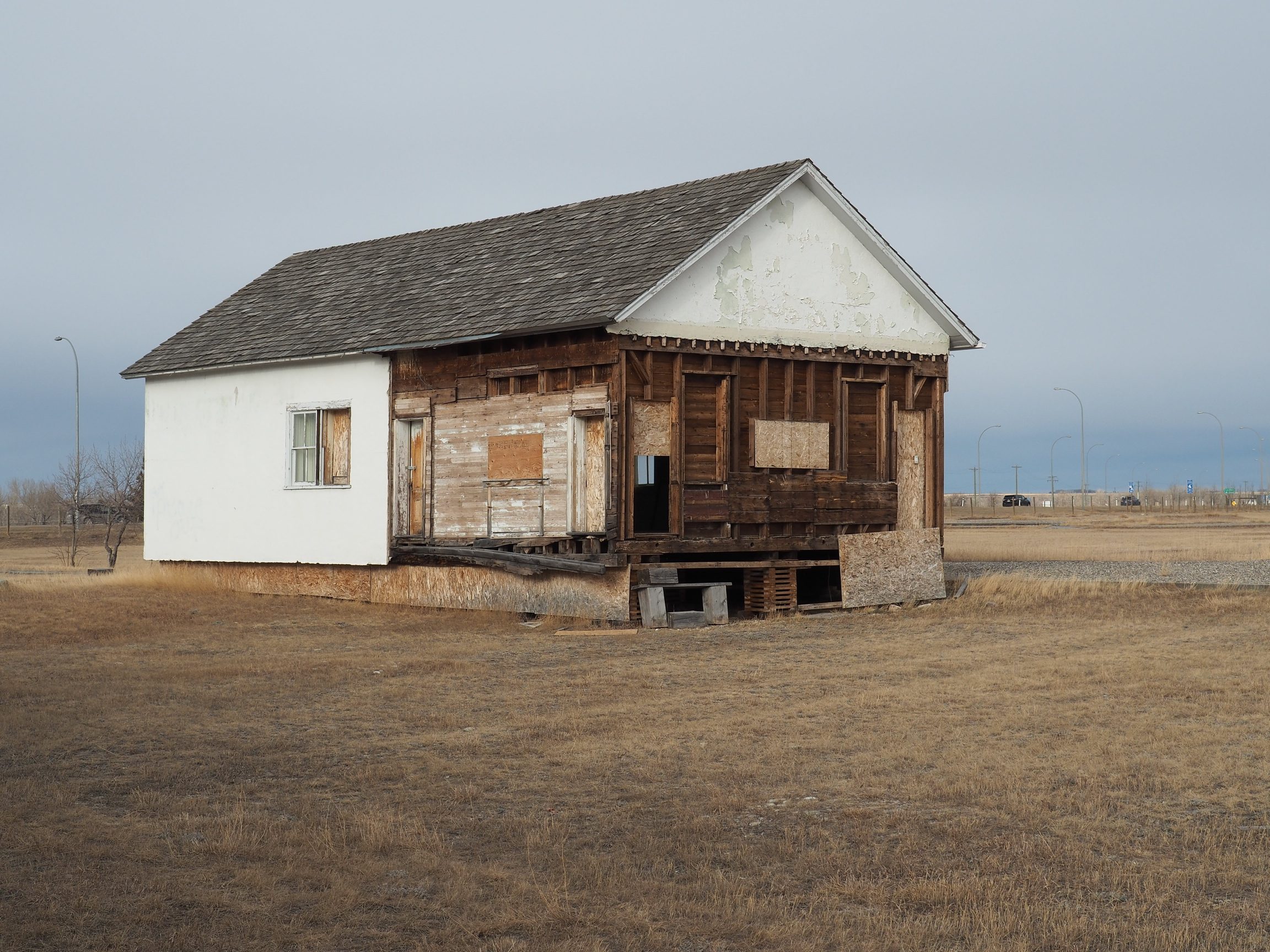 The Digitally Preserving Alberta’s Diverse Cultural Heritage project was approached by the Department of Alberta’s Culture and Tourism to assist with the relocation of the Harness Shop by providing imagery of it’s current location in relation to the other structures at the barracks. This was achieved through a UAV photgrammetric survey flown with a DJI Phantom 4 and Pix4D Capture. The flight was flown in a double grid pattern with a 90% overlap between images, which collected 408 images. These images where then processed in Pix4Dmapper Pro to produce an orthomosaic image (Scan Locations) and point cloud. 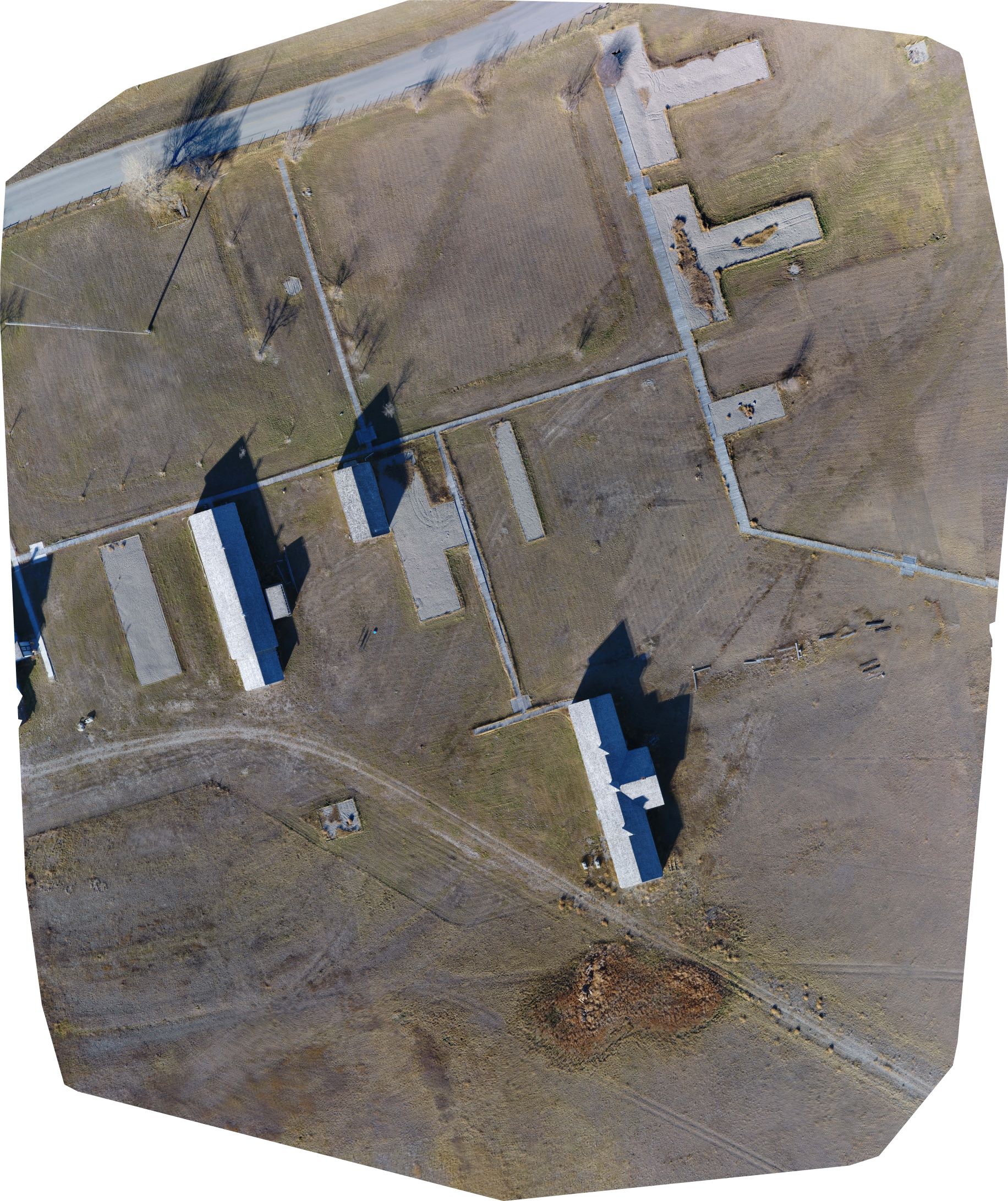 The raw data files for this project are available for download from the archive repository. Point cloud is .las file format. Please download the metadata template to access metadata associated with each file. All data is published under the Attribution-Non-Commercial Creatives Common License CC BY-NC 4.0 and we would ask that you acknowledge this repository in any research that results from the use of these data sets.