The Ogilvie Flour Mills Co. Grain Elevator in Wrentham was constructed in 1925. It is a typical wood-cribbed grain elevator with a rare example of a balloon annex. With associated office, storage shed, and outbuildings this elevator is an example of a rapidly disappearing iconic Prairie structure.

Loading grain into railway cars for distribution used to be back breaking work, done by farmers and farmhands who shovelled grain into two-bushel sacks [1]. The sacks would be transported to a platform along a railway line and then emptied into the cars, which was a time consuming and backbreaking job [1]. The Canadian Pacific Railway (CPR) wanted larger, vertical warehouses along rail lines. To move the grain upward a belt with scoops along it, called the “leg,” was developed. The leg gave grain elevators their name and determined the shape and interior functionality of the structures.

To encourage construction of these sites, the CPR offered free land rental to companies who would build their standard 25,000-bushel grain elevators including a leg powered by steam or gas engines. While the CPR encouraged standard design, there is considerable variety in the height, profile, and storage capacity in the elevators built across Canada [1]. Most grain elevators are at least 24m tall and their economic value allowed for the growth of many small towns across Canada.

Despite differences, all grain elevators include three main components: the elevator, the driveway, and the operations which include the office and engine. Annexes were often built to add storage capacity. Rectangular wooden “crib” annexes were built as permeant additional storage either as a separate building or attached to the elevator. In the 1920s the “balloon” annex began to be used as a temporary facility. Less sturdy than the crib annexes, balloon annexes were one-storey wood frame buildings which tended to sag over time, giving them their name. Early annexes held an additional 30,000 to 35,000 bushels, while those added after the 1950s held 60,000 bushels.

The interior of grain elevators are full of clever functioning design. Trucks would enter the grain elevator via a driveway, which would have a grate into the pit or boot. Elevators constructed before self-dumping trucks included gear mechanisms to dump grain from the truck or horse-drawn carriages [1]. After the grain is dumped, the operating agent would select a bin via a system of levers and start the motor that powers the leg [1]. The leg would scoop grain which would be dumped into the distributor at the top of the leg. The operating agent would direct the grain into the appropriate spout for the selected bin. To ship the grain, the agent would open the selected bin to pour grain into the back pit. The grain is then elevated again, poured into the hopper to be weighed, and then elevated into the car spout where it would be poured into a waiting rail car [1].

Built in 1925 located in Wrentham, AB the fading signage on this grain elevators identifies it as one constructed by the Ogilvie Flour Mills Co [2]. Based out of Montreal, the Ogilvie company entered into early agreements with the CPR to establish their grain elevators across Canada to supply wheat for their flour mills in Quebec, Ontario, and Manitoba [2]. In the early 1900s, the Ogilvie company thrived as Canada’s largest grain handling company and rivalling companies from the United States. However, by the 1940s Ogilvie could not compete with co-operative grain handlers, and by the 1960s the company diversified into processed foods and disinvested all of their elevators including the one in Wrentham [2].

The Wrentham elevator is a typical tall, wood-cribbed structure used on most grain elevators as it provided strength and structural integrity. The exterior is covered in sheet-metal, which was also frequently used on elevators as it protected the wooden elements from weathering as well as provided some fire protection. This elevator follows a standard layout, with a dirt road and earthen worked ramps into the driveway featuring large access doors [2]. The office and engine room is detached from the main building, with a belt running under the connecting walkway. To meet fire safety a separate fuel room was housed a few meters to the west of the engine, connected with a fuel line. The fuel room is connected to the outhouse and coal shed. Likely added in the 1950s, this elevator also features a balloon annex which contributes to its significance as there are extremely few left still intact [2].

At the peak of their use, grain elevators dominated the horizon every 12 to 16 kilometres. Today, much fewer remain [1]. As early as the 1930s these sites started to disappear as falling farms led to depopulation of small rural towns. As agricultural technologies began to rapidly develop in the 1950s and onward, these wooden grain elevators increasingly fell out of favor for mechanized equipment, larger corporate farm initiatives, and bigger concrete grain terminals [1].

The future of remaining grain elevators is often uncertain, as funding for restoration is sparse and gaining heritage designation is a difficult process requiring hard work by driven individuals. Now owned by the Ogilvie Wooden Grain Elevator Society, this elevator will at least be saved from development impacts although its long-term future is unknown. It was digitally documented by the University of Calgary digital heritage research lab using a combination of terrestrial laser scanning and drone-based photogrammetry in August 2022 to preserve this example of a truly iconic structure.

All historical images were sourced from the book Homestead Country: Wrentham and Area, written and published by the Wrentham Historical Society. All modern images were collected by the Capture2Preserv team. 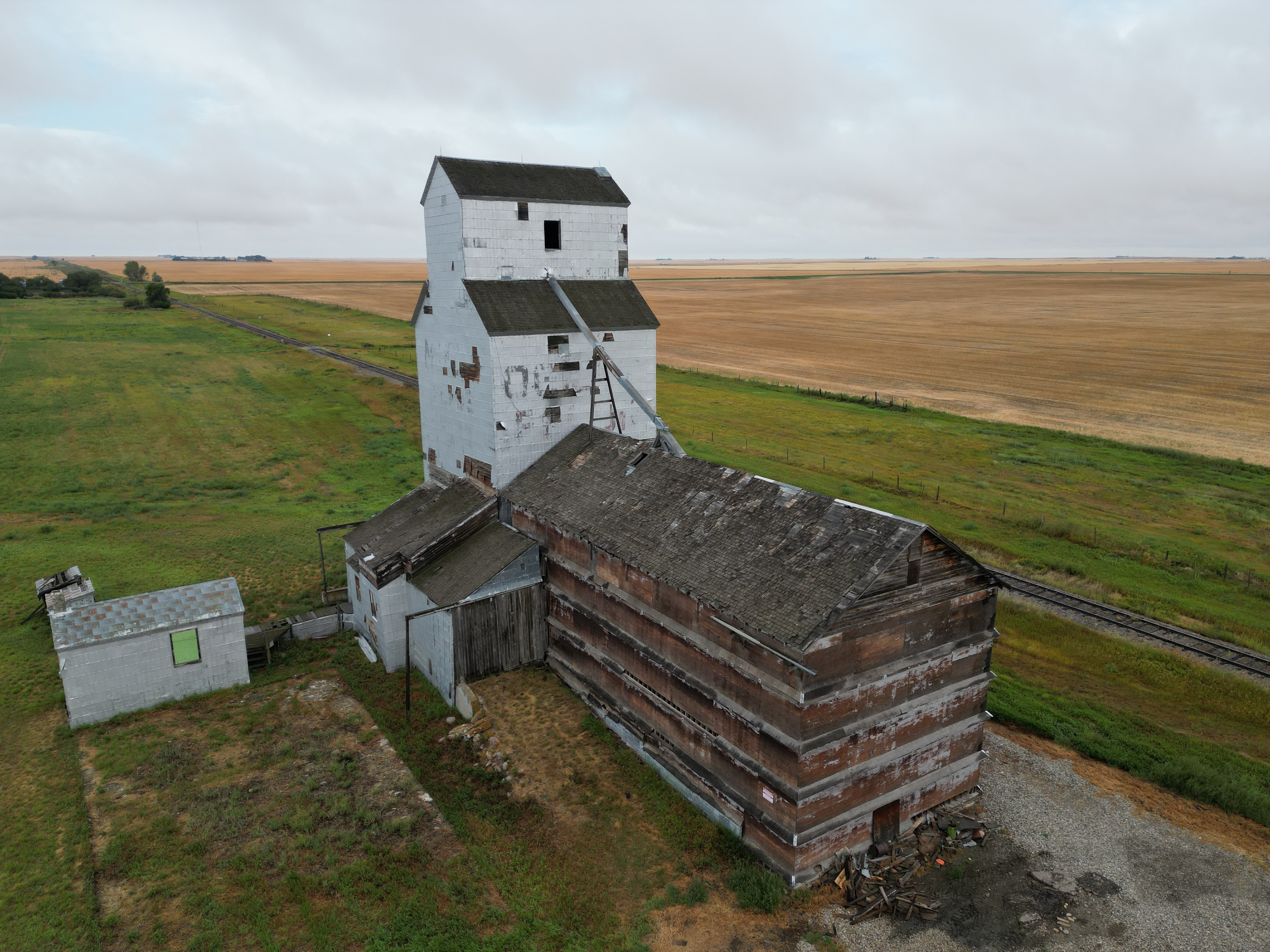 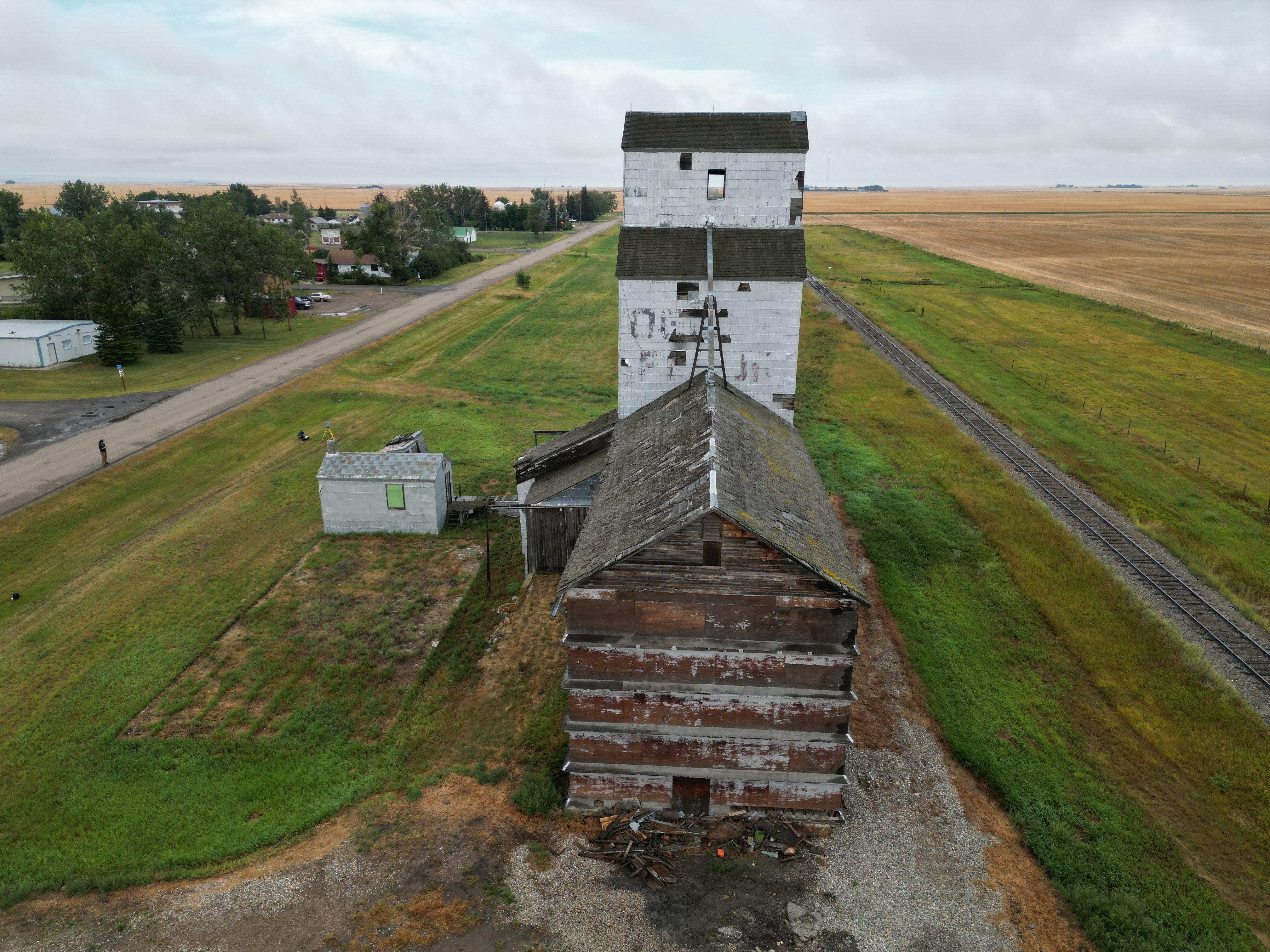 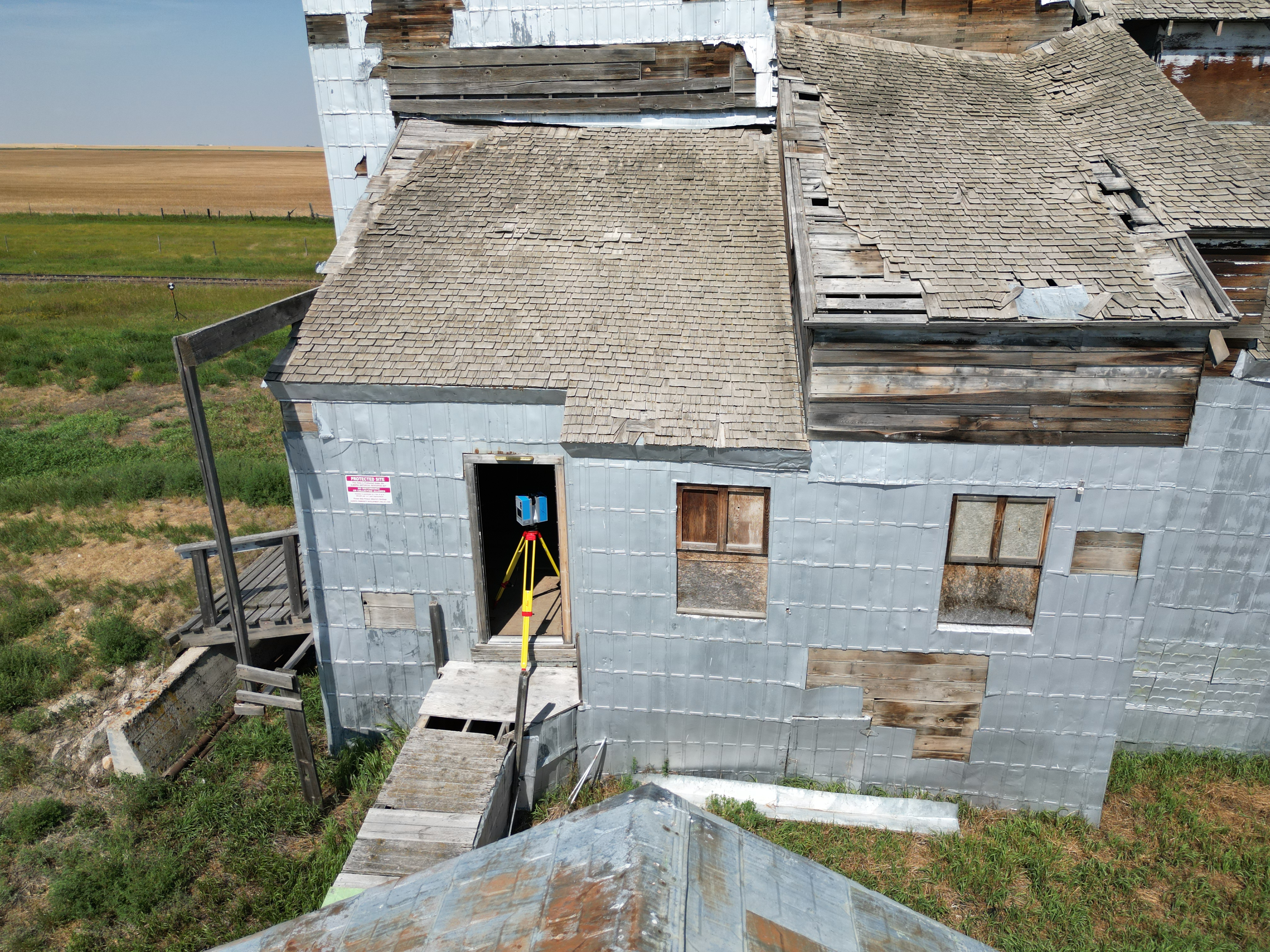 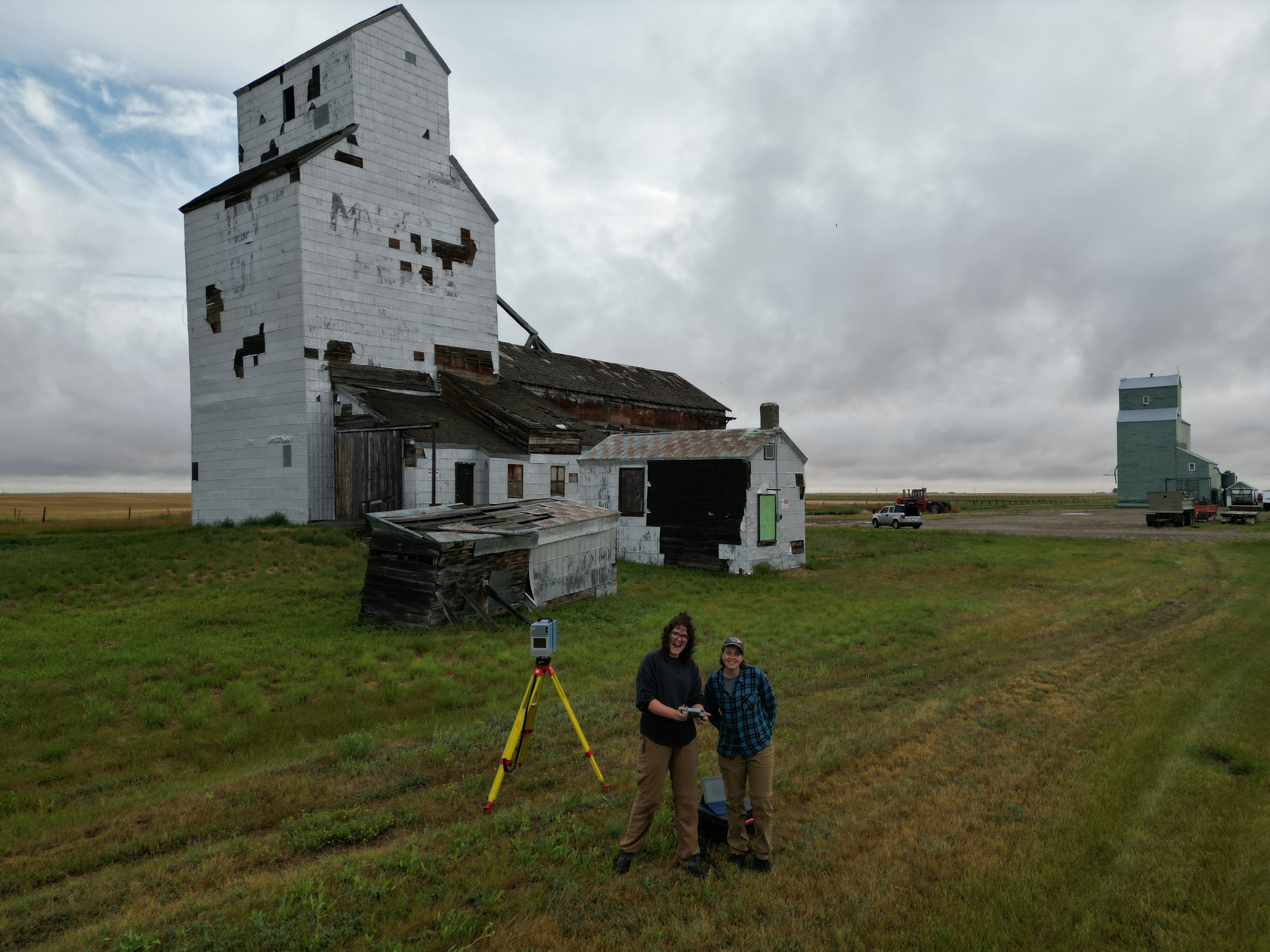 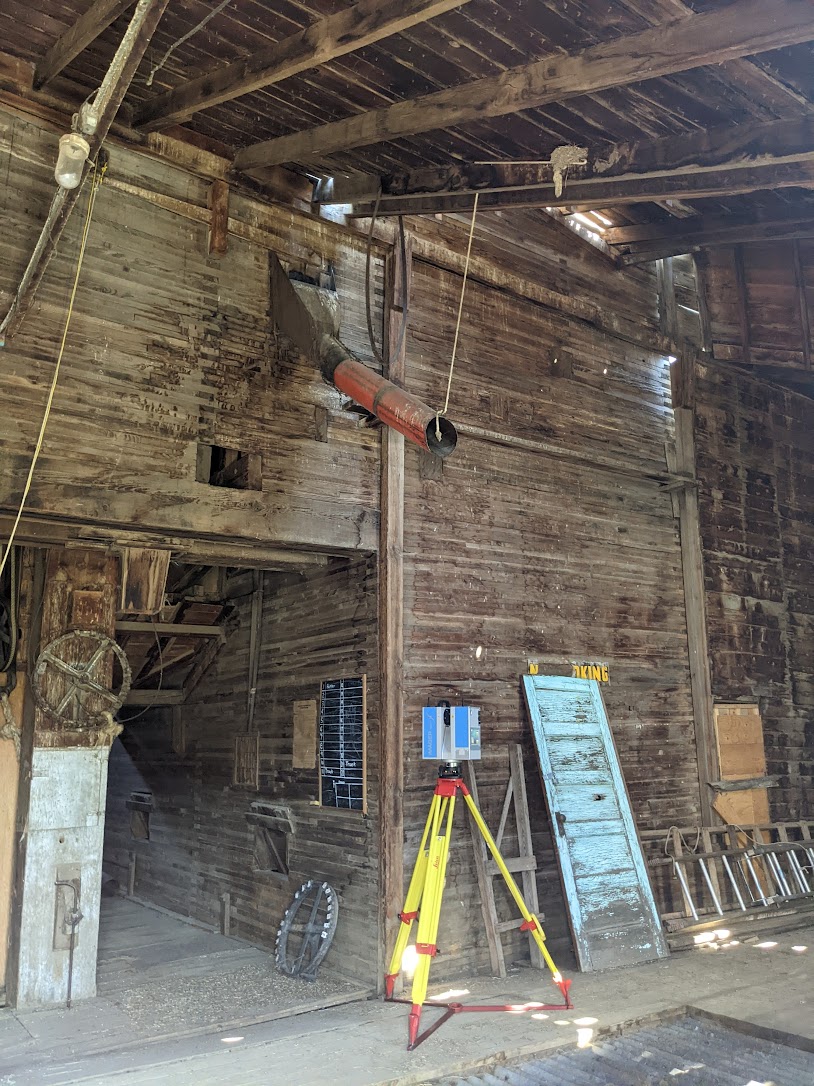 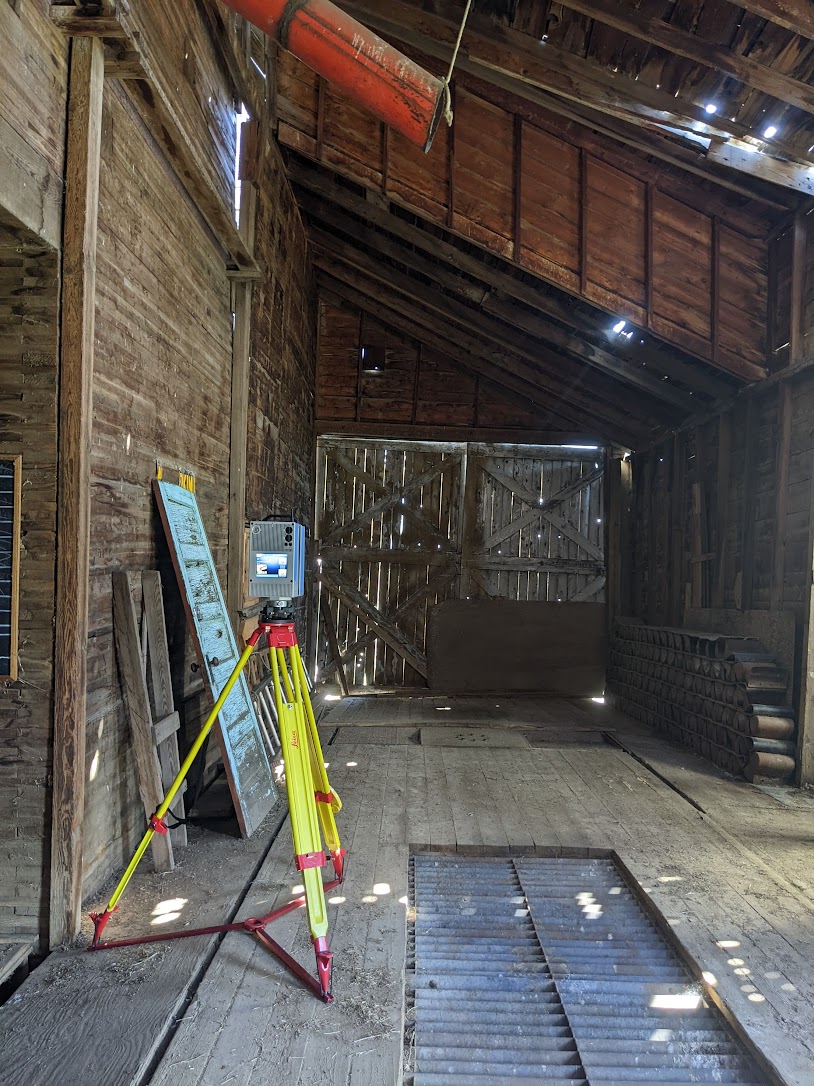 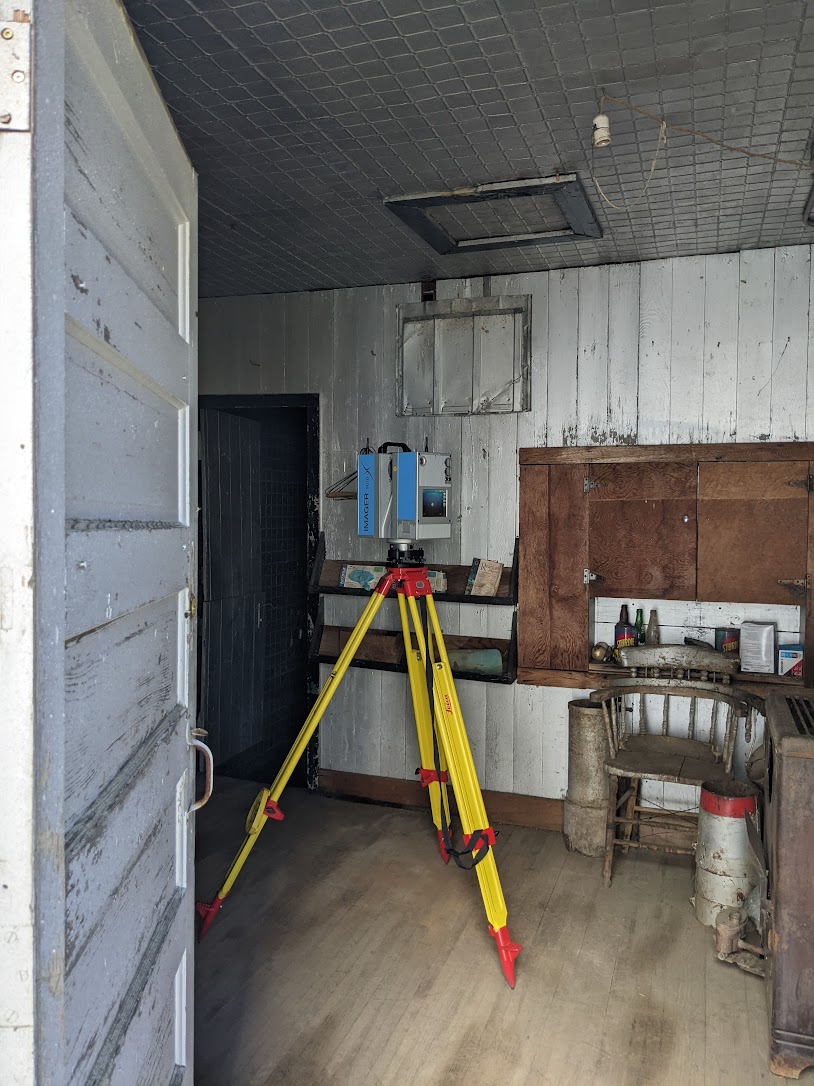 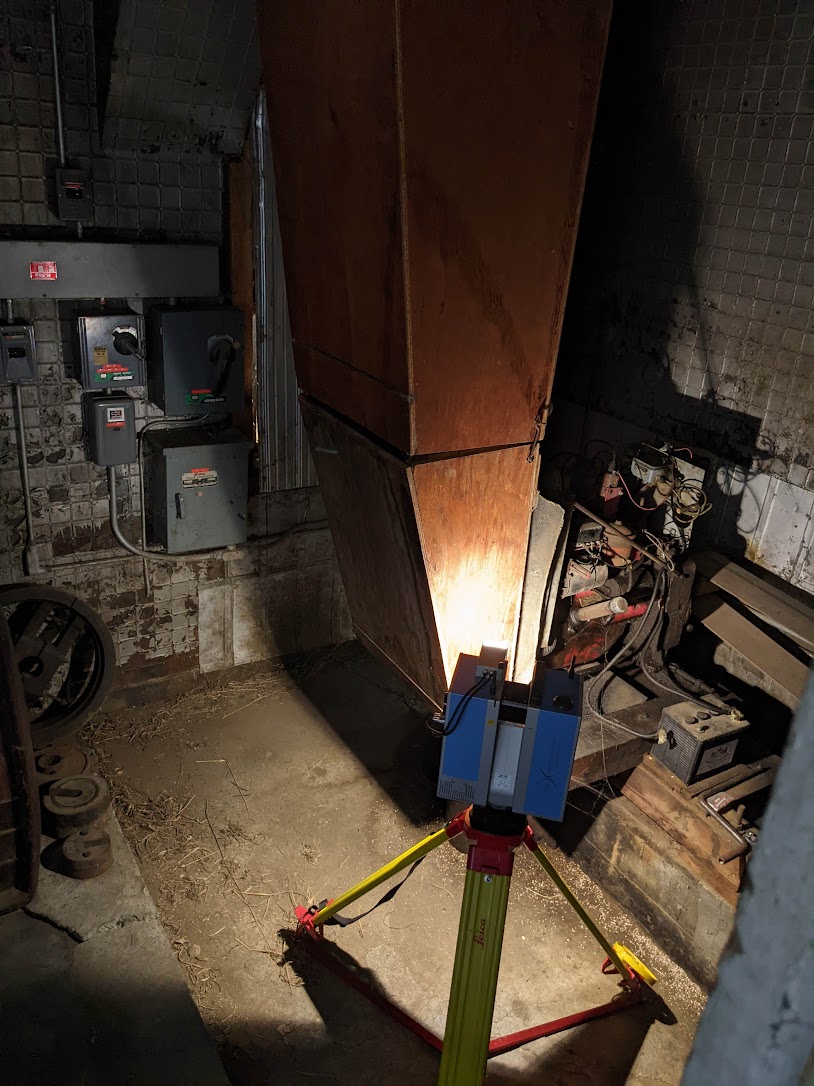 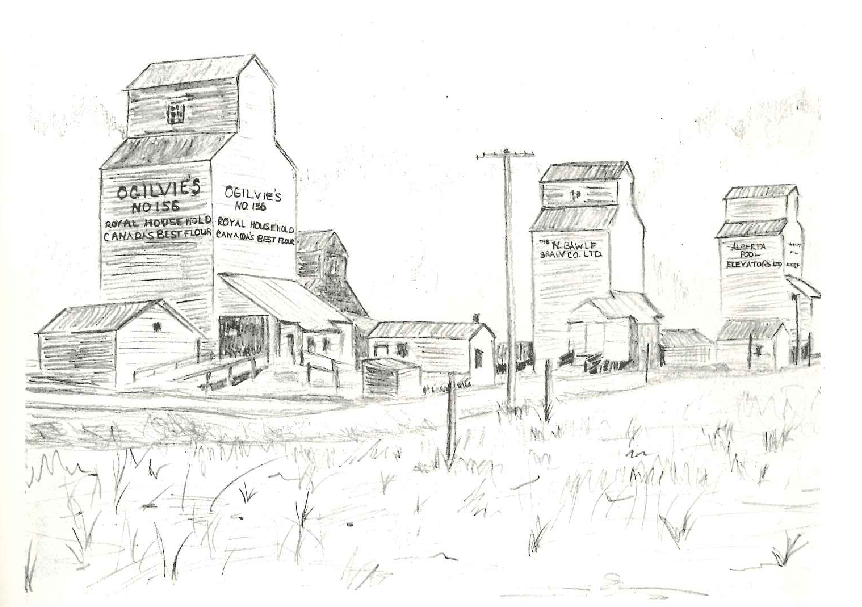 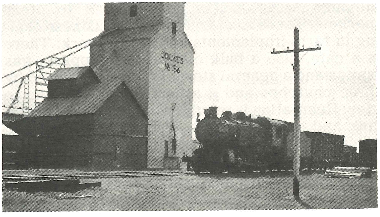 The Capture2Preserv team was contacted by the Ogilvie Wooden Grain Elevator Society (OWGES) to digitally preserve the grain elevator at Wrentham, AB. Over two days in August 2022, the grain elevator and auxiliary buildings were recorded with two laser scanners and a drone. Thirty-nine (39) scans were captured with the Z+F 5010X terrestrial scanner on the exterior (red dots) and interior (blue dots) of the grain elevator and auxiliary buildings. The Z+F 5010X scans were registered with Z+F Laser Control. Two passes were made with GeoSLAM ZEB Horizon mobile scanner with the ZEB Vision 360 camera providing coverage for the exterior of the grain elevator, office, engine room, and fuel sheds. The GeoSlam data was registered and processed in GeoSLAM HUB and Connect  The drone, Mavi Mini 3 Pro, was used to capture images for photogrammetry and provide video footage of the site. The photogrammetry data was processed in Pix4D. All these data sets were brought together in Autodesk Recap and Cloud Compare to provide full coverage of the buildings. 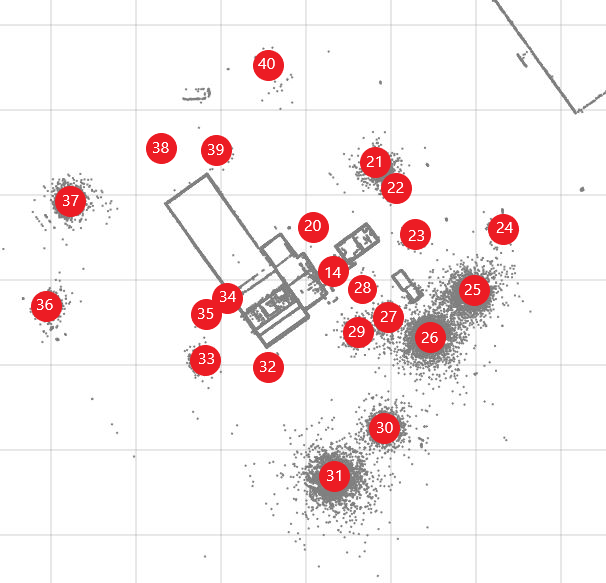 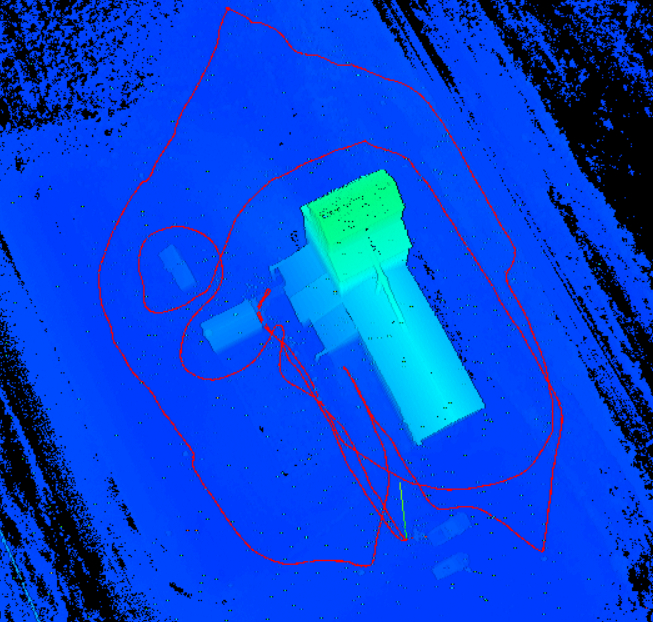 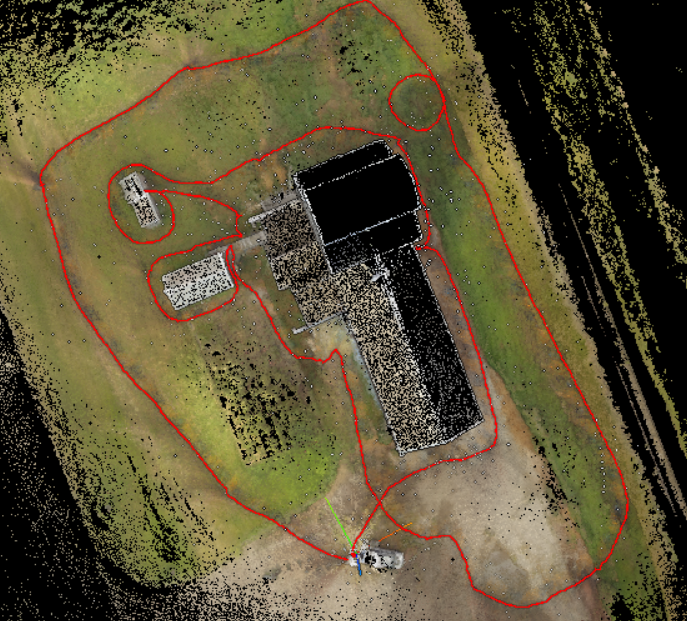 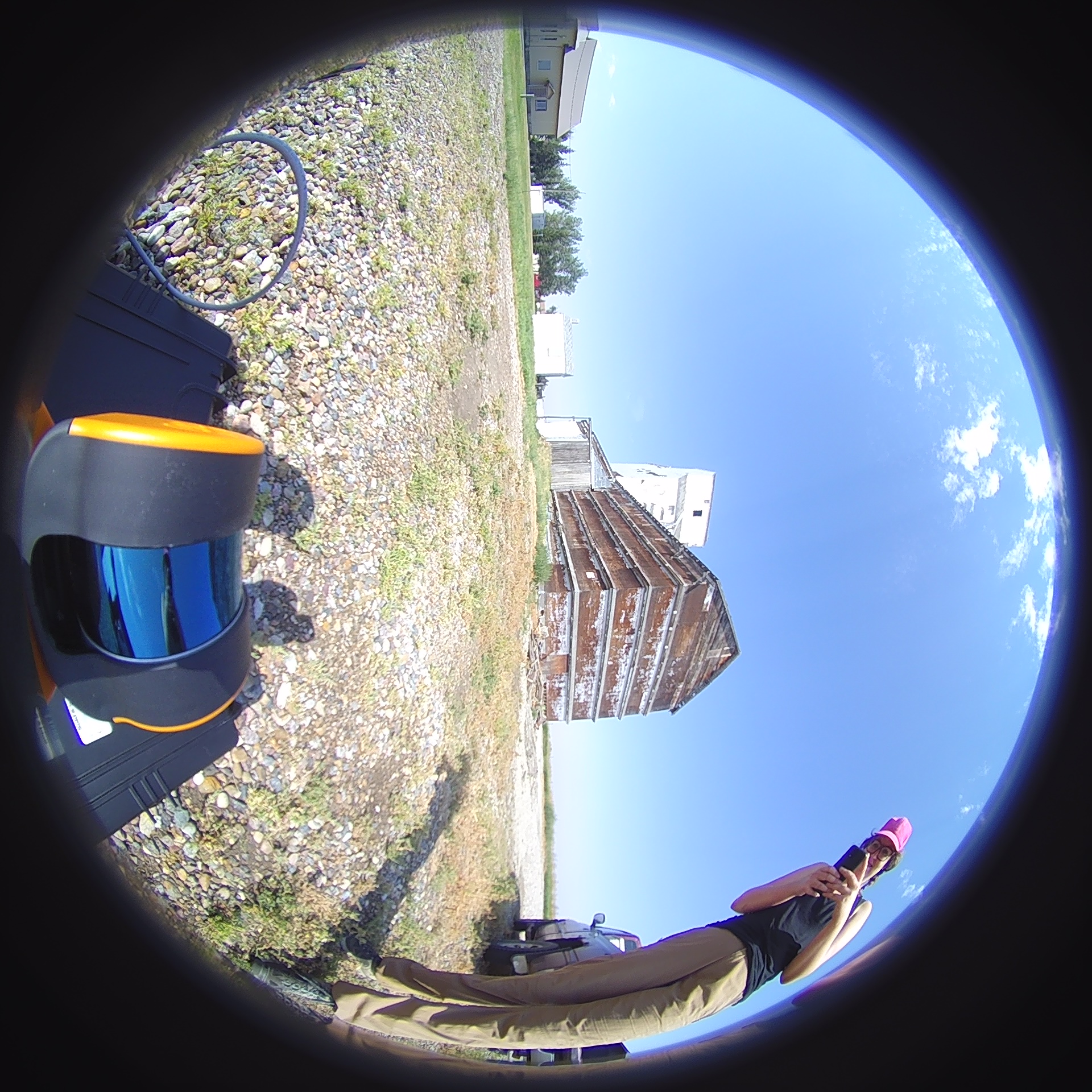 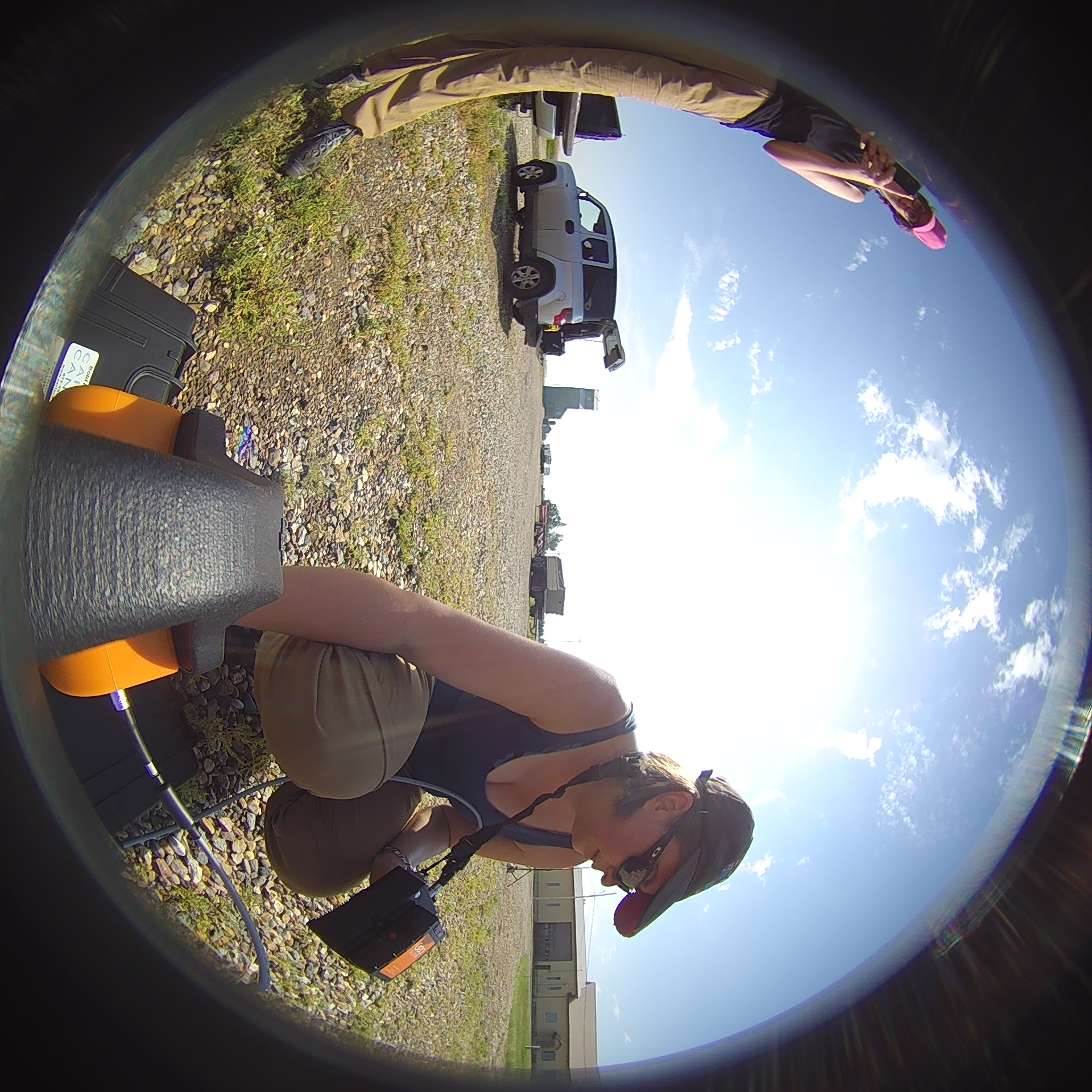 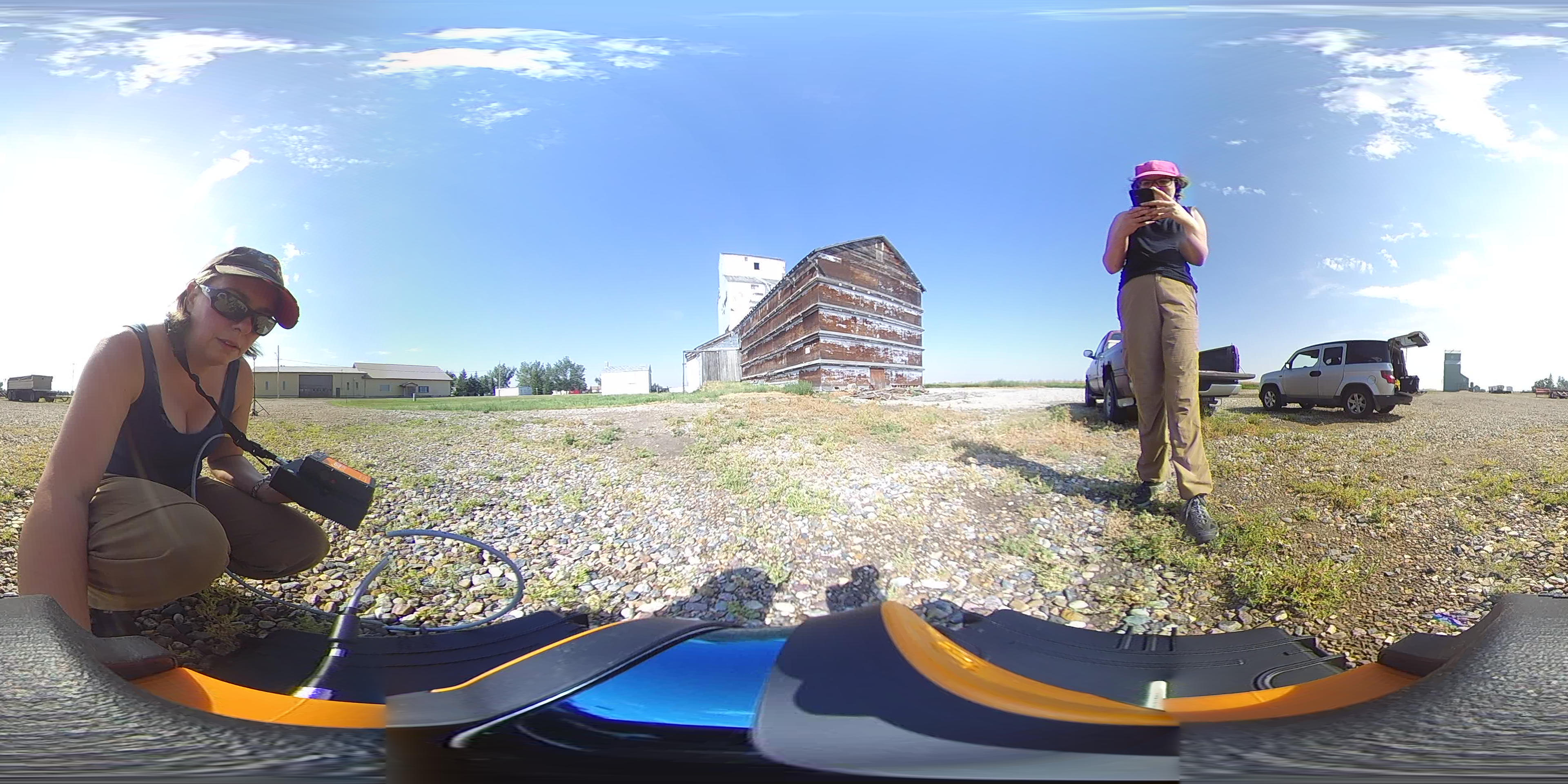 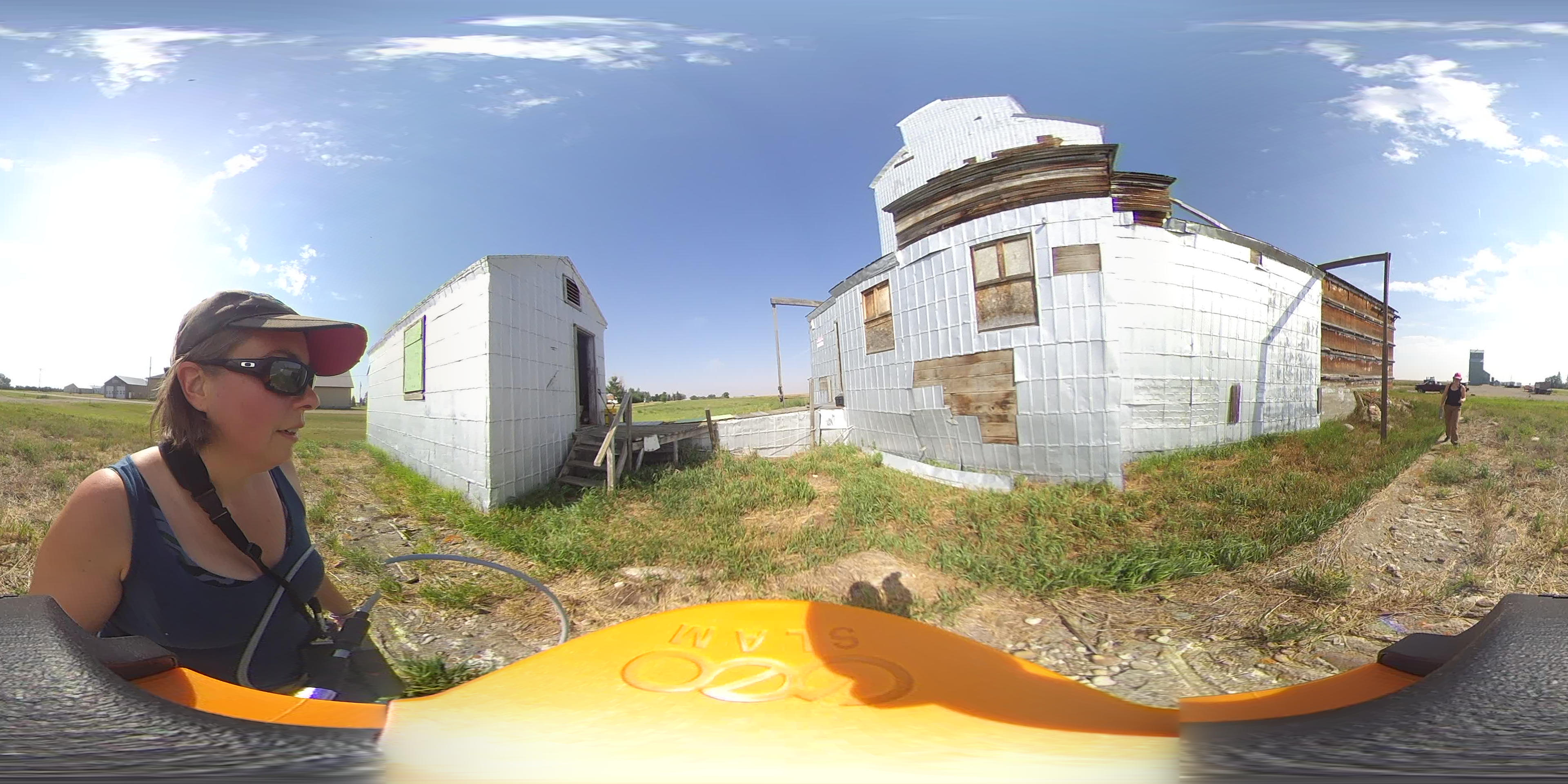 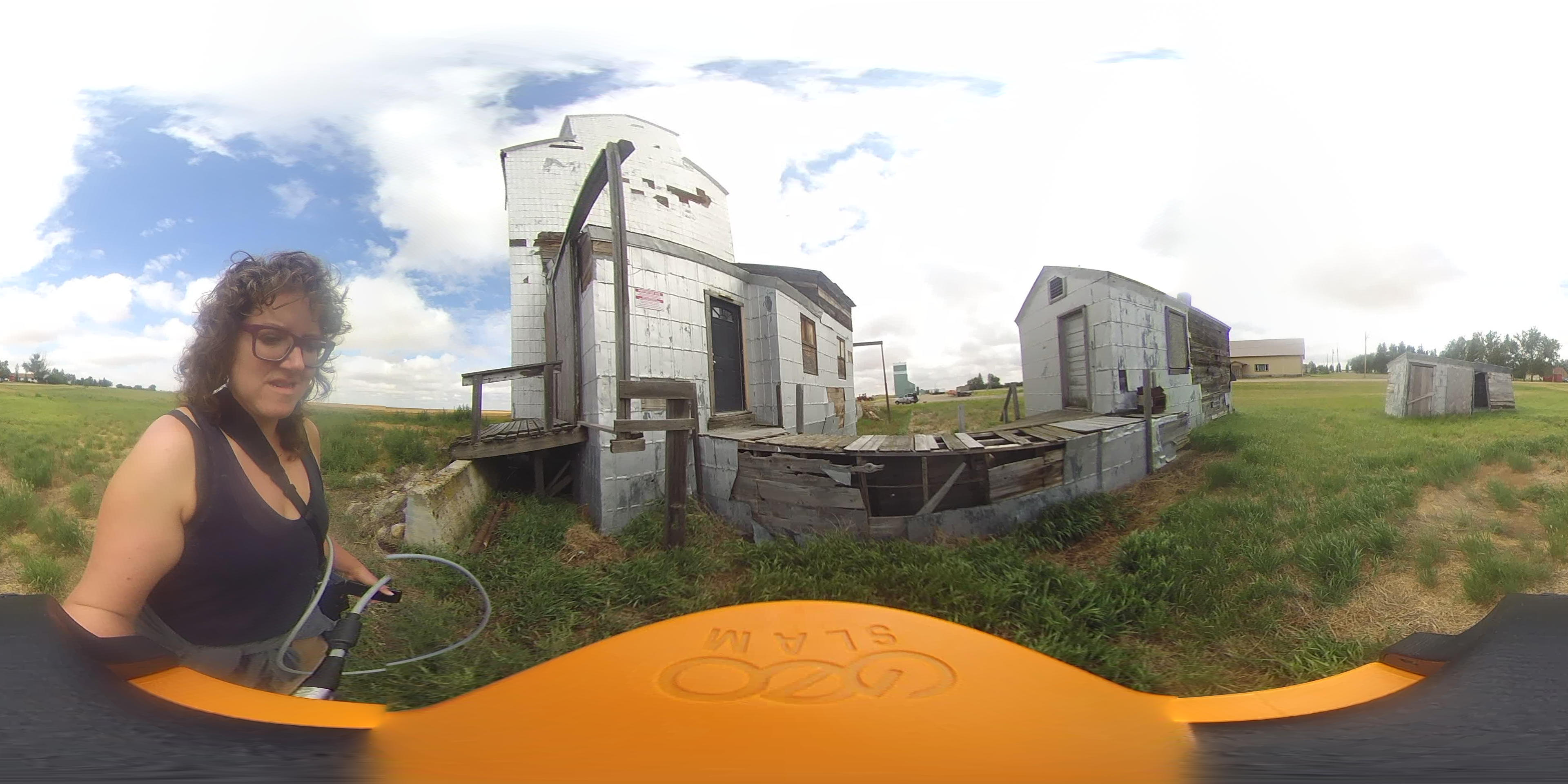 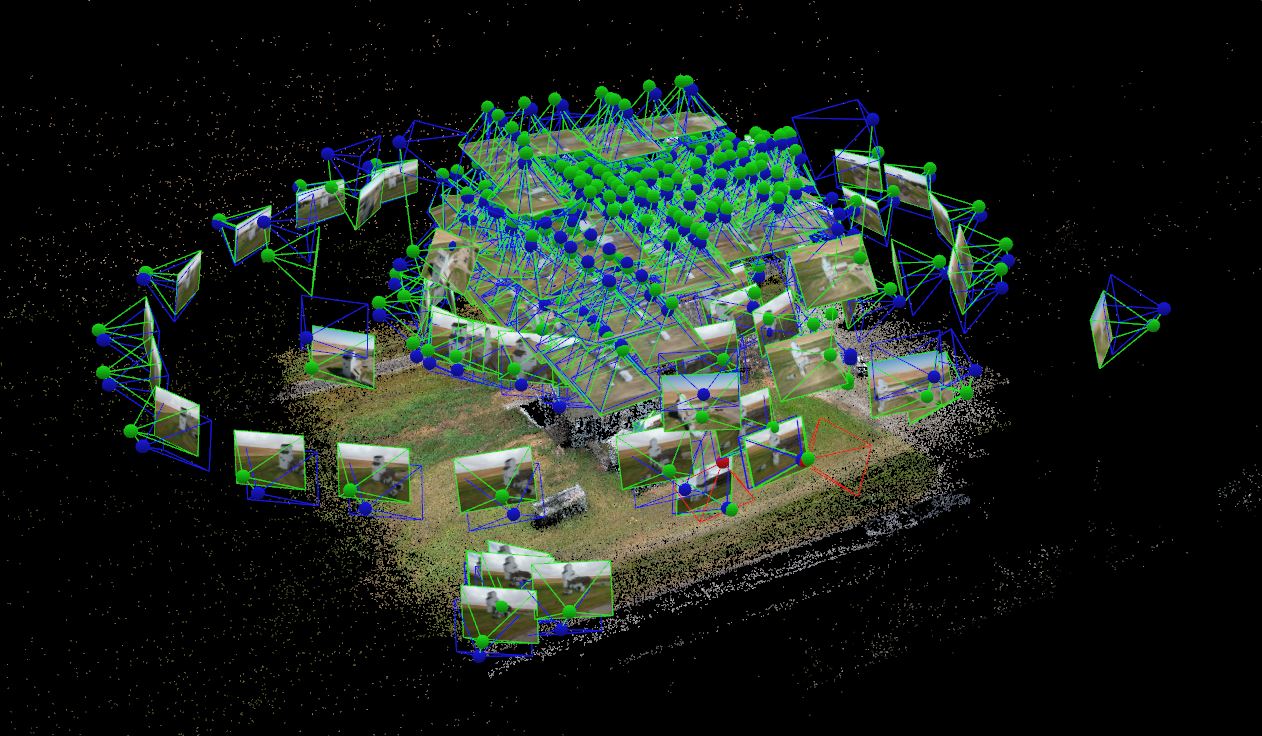 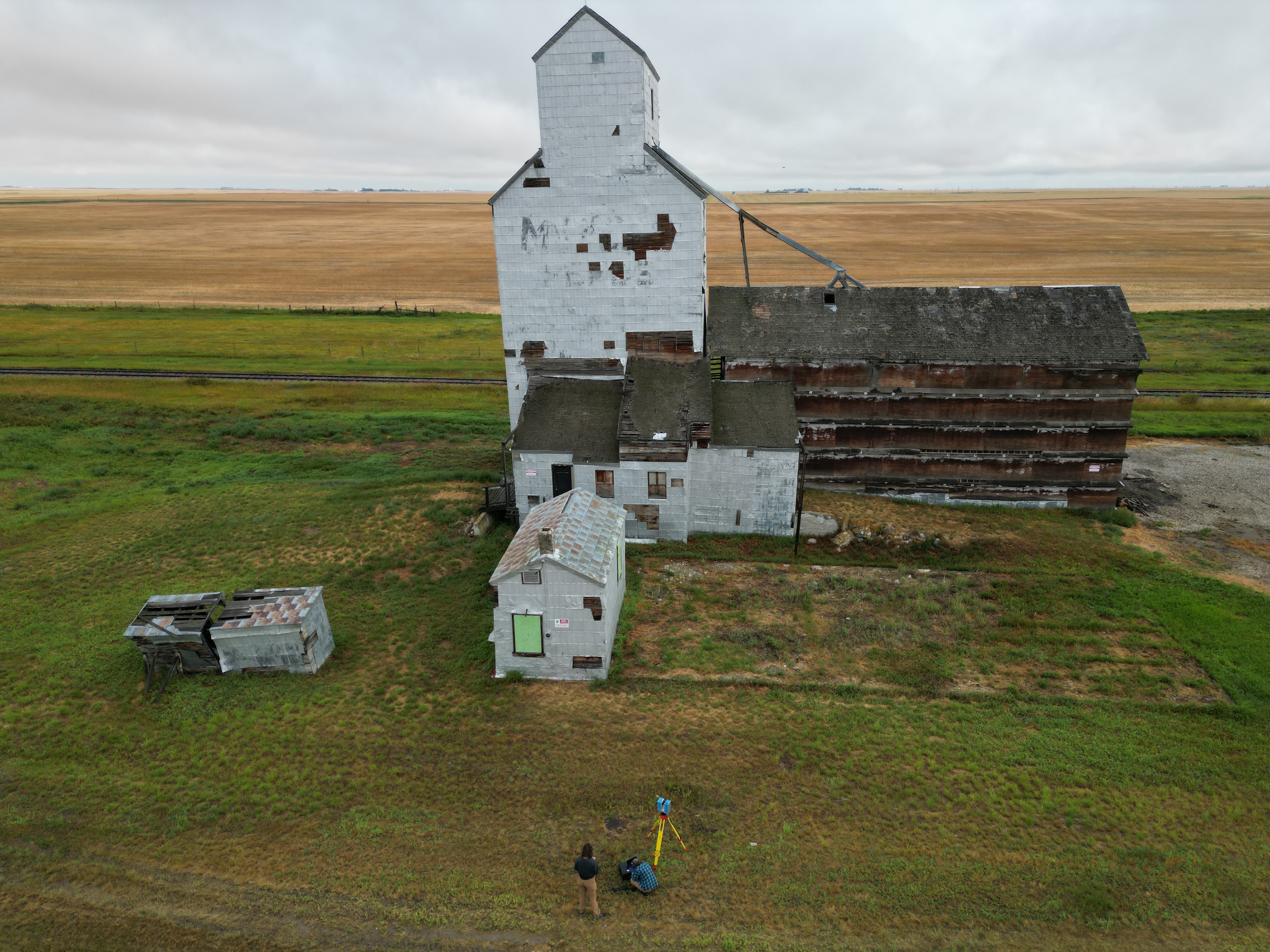 The cleaned data files for this project are available for download from the archive repository. There are two file types. The 3D point clouds are in .las or .laz file formats and the orthomosaic tile is a world tiff file format. Please download the metadata template to access metadata associated with each file. All data is published under the Attribution-Non-Commercial Creatives Common License CC BY-NC 4.0 and we would ask that you acknowledge this repository in any research that results from the use of these data sets. The data can be viewed and manipulated in CloudCompare an opensource software.