The Okotoks Erratic, also known as ‘Big Rock’, was dropped by the southward-moving glacier around 10 000-12 000 years ago. The Okotoks Erratic is believed to have originated in Jasper National Park and now currently sits 7-8km West of the Town of Okotoks. The Rock is estimated to weigh 16500 tonnes and has dimensions of 41m by 18m by 9m [1]. The Okotoks Erratic is an important location for many of the First Nation groups in the area, but is often associated with the Blackfoot First Nations and a story of Napi, the supernatural trickster, explaining how the rock got to its current resting place and why the rock is split down the middle.

The first documentation of the Erratic was by James Hector, a member of the Palliser expedition in 1857, who misidentified the rock as a granite boulder [1]. The Rock is actually composed of quartzite, a clue as to where it originated and how far it has traveled from its original resting place. The Rock belongs to the Foothills Erratic Train, a train of glacial erratics that was formed as the result of an enormous landslide of quartzite rocks that cascaded into the Athabasca River Valley. At the time of the landslide, between 12000-17000 years ago, the river valley held a glacier onto which the rocks settled. The glacier contained within the Athabasca River valley moved eastward until it collided with the Laurentide Ice Sheet, which covered most of Canada at the time [3]. This collision caused the glaciers to be pushed southward and begin their journey parallel to the Rocky Mountains. The warming transition from the Pleistocene to the Holocene caused the ice streams to begin to melt as they flowed southward, and these quartzite boulders were dropped off along the way, thus forming the Foothills Erratics Train. The Train runs the length of the Rocky Mountains from Alberta down into Montana and is formed of quartzite erratics of varying size, with Big Rock being the largest. Some rocks, including the Okotoks Erratic, were dropped off hundreds of kilometers from where they started. The Okotoks Erratic has been estimated to have moved an impressive distance of nearly 400km, all the way from Jasper to Okotoks. The shape and size of the glacial erratics were preserved because they rode along the top of the glaciers and ice streams, and were not churned and crushed into glacial till by the masses of moving ice.

The Story of Napi

The Blackfoot people associate the Okotoks Erratic with their cultural hero and creator, Napi. In this Blackfoot story, Napi or “Old Man” has been traveling on a hot day and begins to feel weary. Napi sits down on a rock for a rest and offers his robe as payment for sitting on the rock. Suddenly, the weather turns and it begins to rain, prompting Napi to take his robe back. The rock, unhappy to part with the robe, begins to chase Napi, so he calls on his friends the animals to help him stop the rock. Napi calls on the Buffalo, the Deer, and the Antelope to help him stop the rock, but none succeed. Finally, Napi calls upon the nighthawks, a common species of bat, to stop the rock, and they succeeded by dive bombing the rock and splitting it in two [1]. The story explains why bats have flattened faces, how the Okotoks Erratic came to be in its resting place, and why the erratic is split in two. The moral of the story is to never go back on your word, and not to take back what you have given [2].

There are a series six panels containing red ochre pictographs on the southern face of the Rock. Many of the pictographs contain geometric images, finger smears and handprints and are hard to interpret because of their abstractness. There are many interpretations of the significance and meaning behind the pictographs, but it is difficult to make conclusions with any substantial certainty. Some archaeologists believe there is a human like figure on one of the panels, and vertical series of repeating marks can be seen on multiple panels, which could represent animal tracks or groups of objects. There are also traditional interpretations from the Tsuu T’ina First Nation that these images depict everything from ceremonies and meteor impact events [1]. The date of these panels are unknown and could be anywhere from hundreds to thousands of years old.

Issues at the “Big Rock”

The issues that are impacting the erratic are the development of the Town of Okotoks and the growing popularity of Big Rock with local residents, sport enthusiasts and tourists. The most noticeable impacts are vandalism, garbage and the effects of being actively climbed for over fifty years [1].

All modern images have been provided by the Capture2Preserve Team and the single historic image was sourced from the University of Alberta libraries. 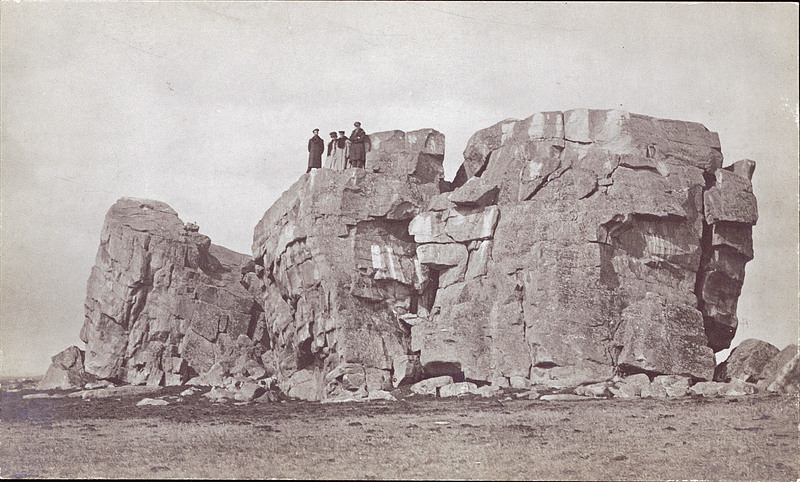 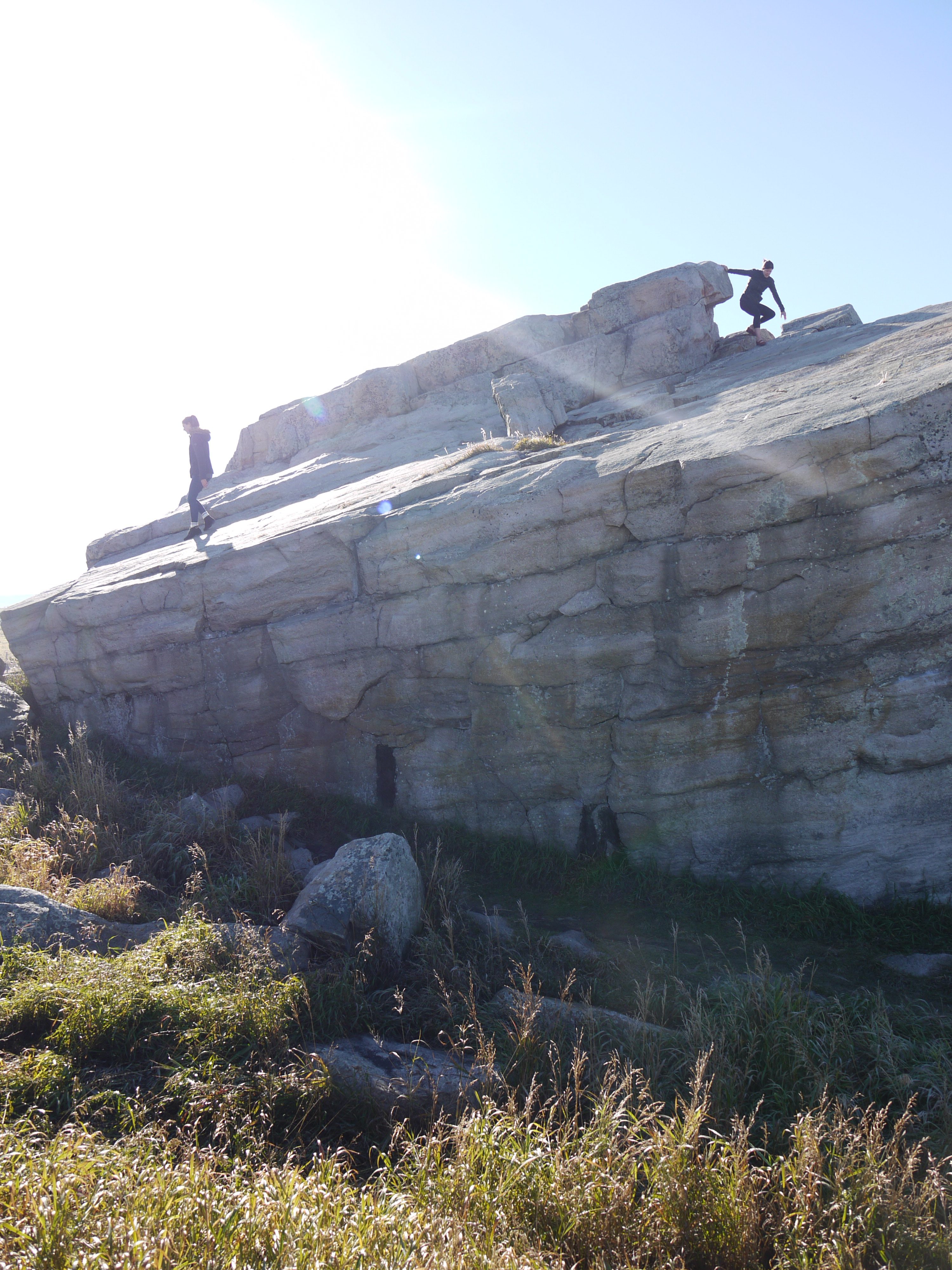 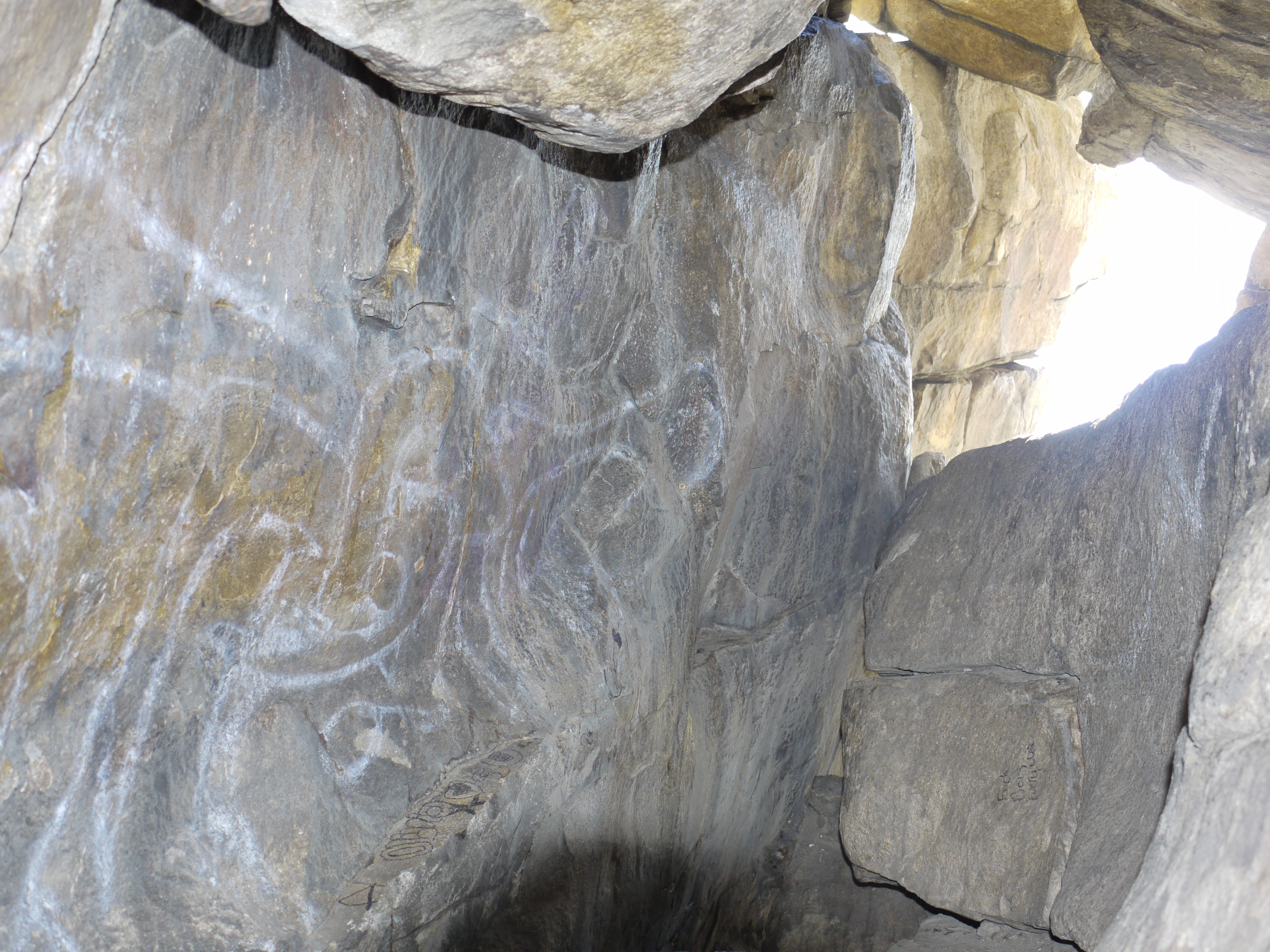 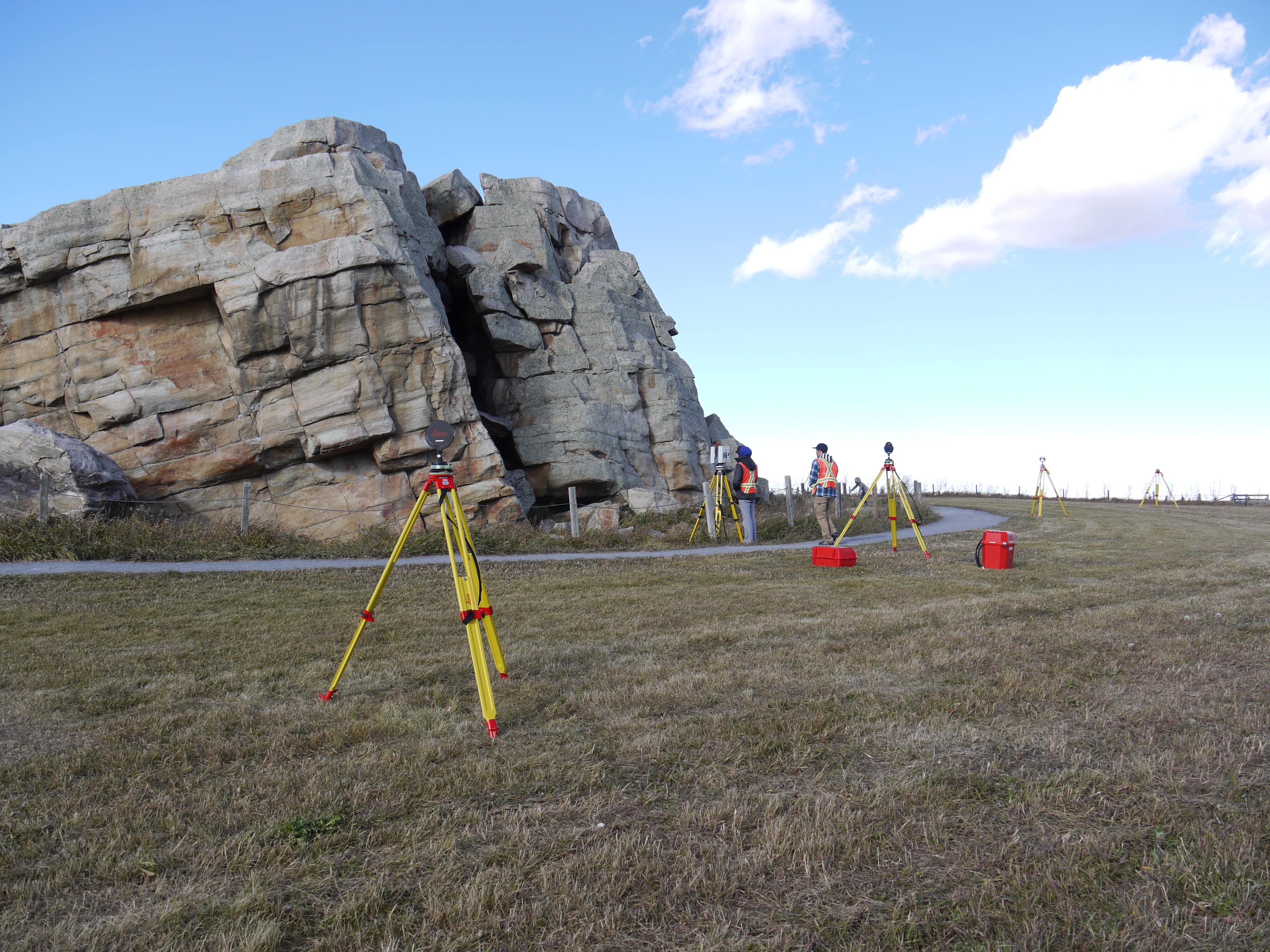 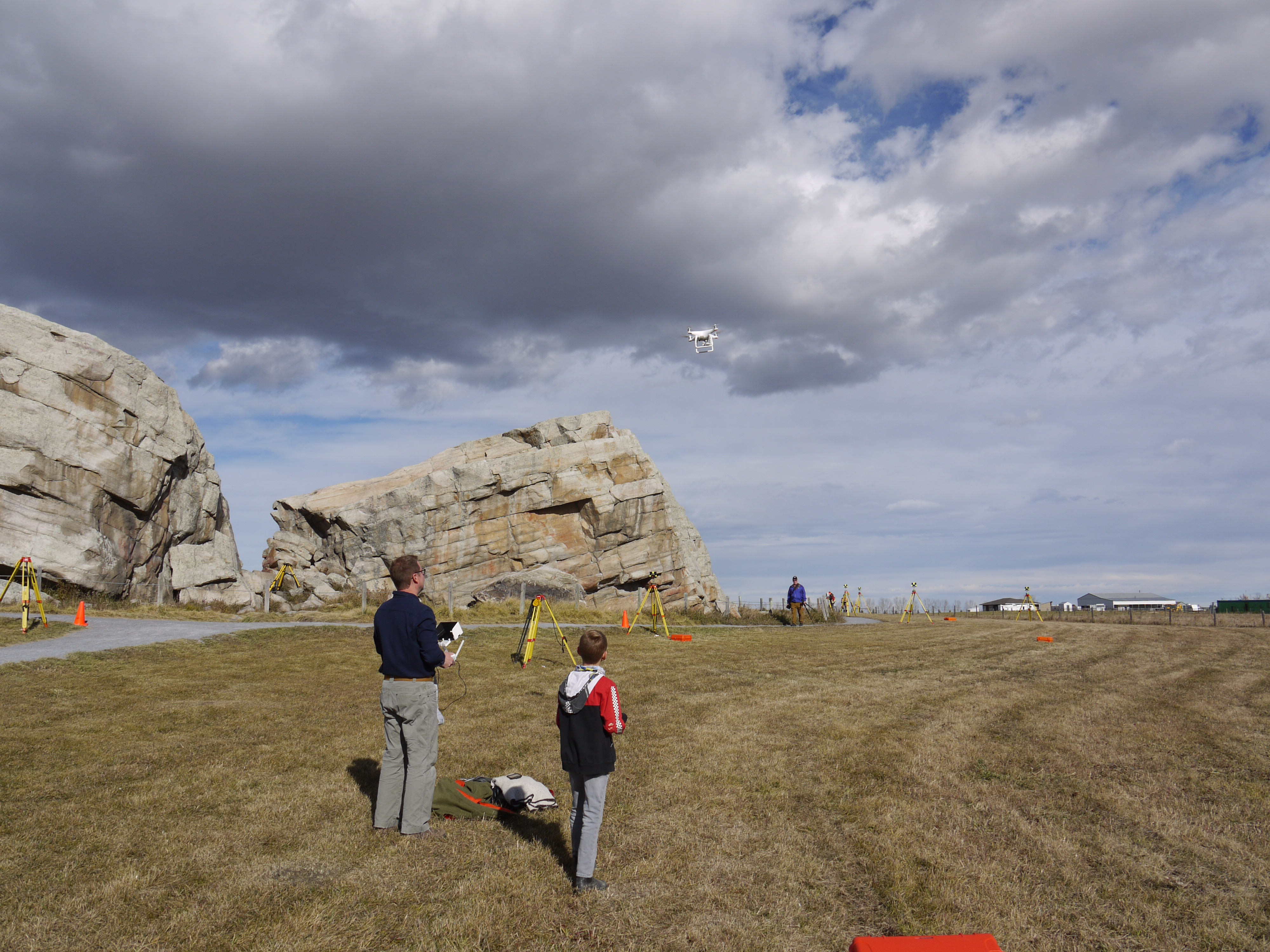 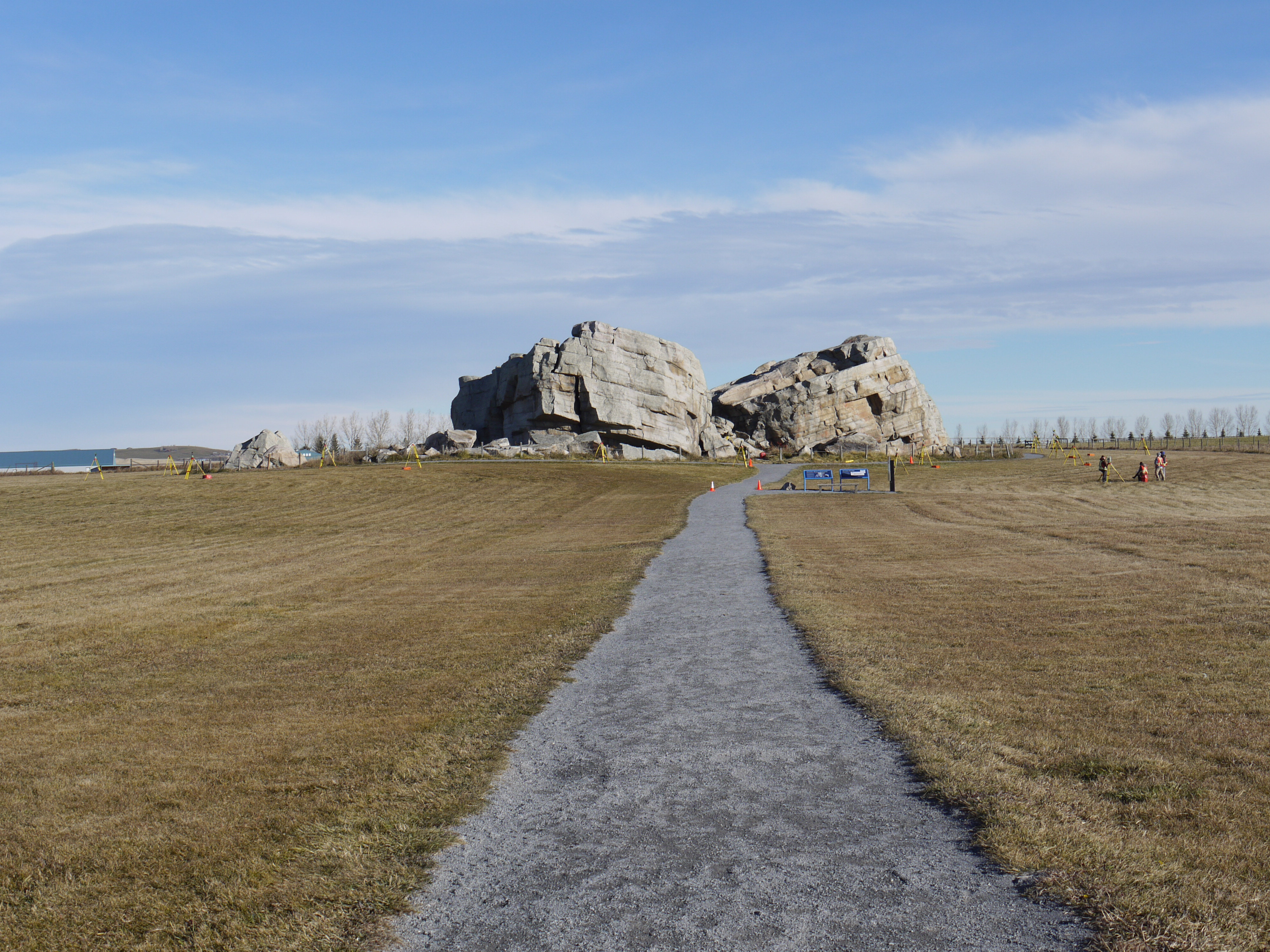 Through two methods of digital capture technologies it is the aim of this project to monitor both natural and human changes to the erratic. The first method used terrestrial laser scanning (TLS) and compared data sets from two different times to monitor physical changes at the erratic. Initial data was collected in 2013 by SarPoint Engineering for CyArk (Scan Location 1). The second data set was collected on 16th October 2016 by fourth year Geomatics Engineering students at the University of Calgary, with a Leica HDS6100 terrestrial laser scanner (Scan Location 2) at 25 locations around the erratic . The data sets were then compared in CloudCompare to identify any changes. The second method was unmanned aerial vehicle (UAV) photogrammetry (Scan Location 3). The DJI Phantom 4 was flown with Pix4D in a double grid pattern over the erratic with 90% overlap between the images. 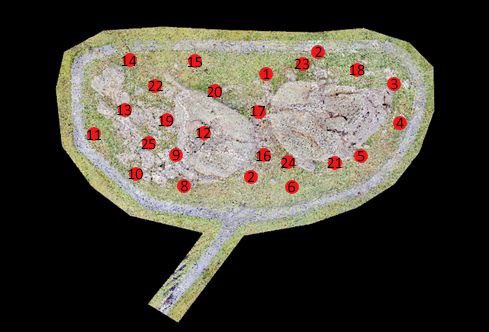 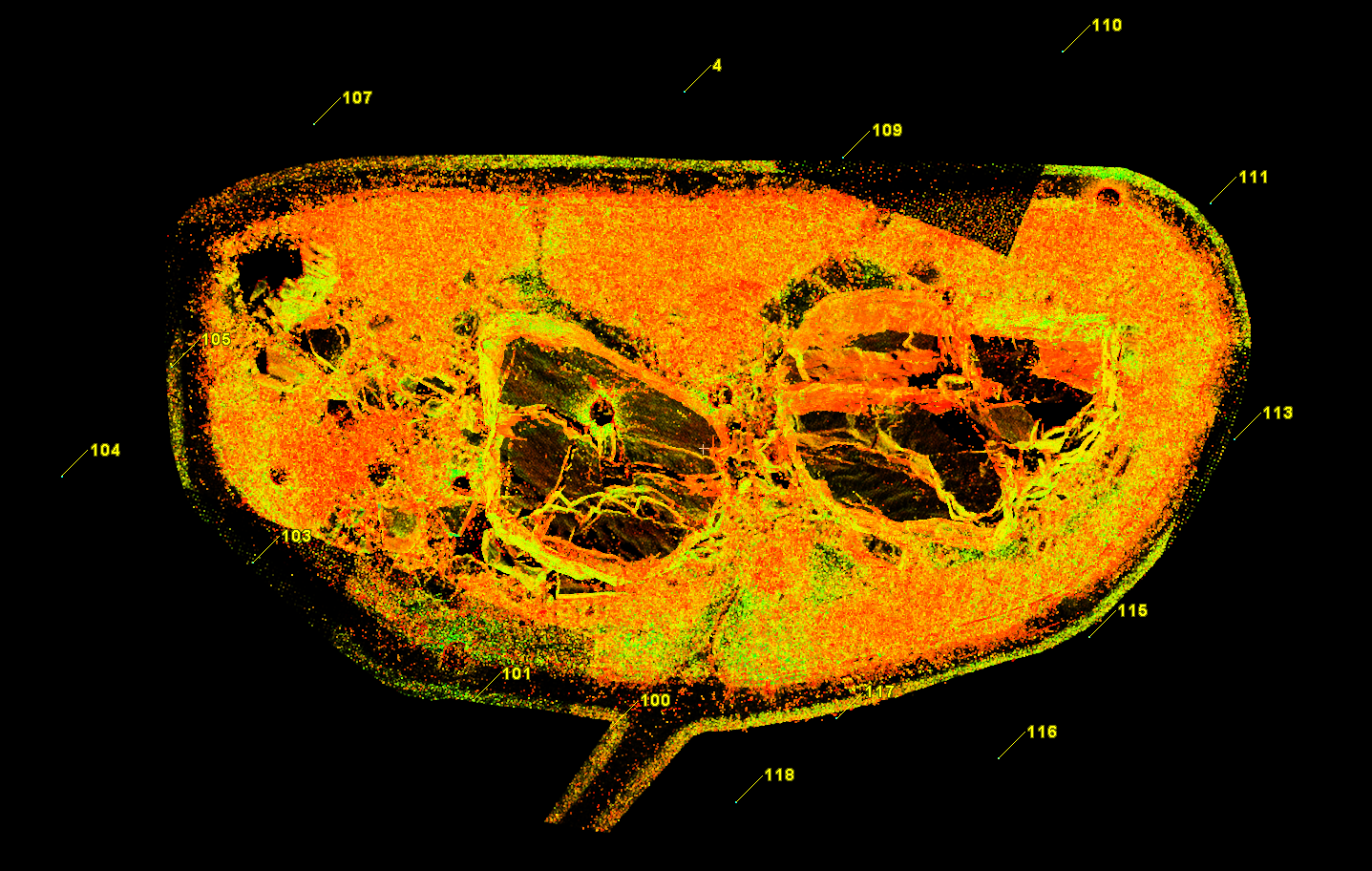 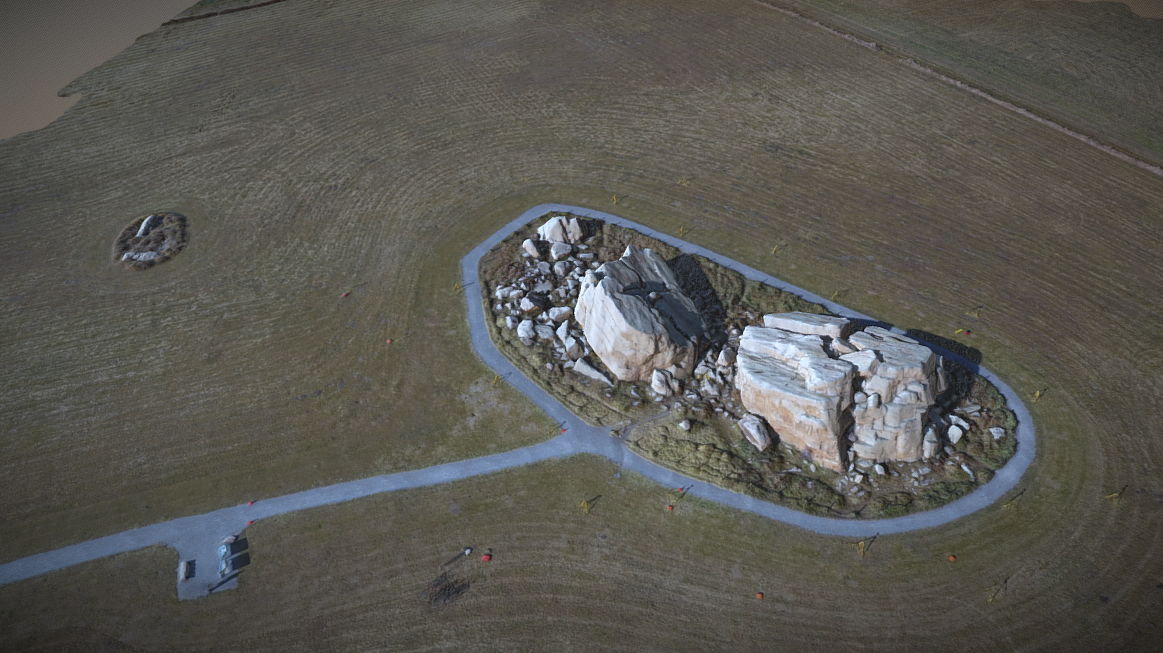 Due to the number of scans and size of the registered point clouds these data sets are subsampled. If the full point cloud is required, please contact Dr Peter Dawson (pcdawson@ucalgary.ca).  Please download the metadata template to access metadata associated with each file. All data is published under the Attribution-Non-Commercial Creatives Common License CC BY-NC 4.0 and we would ask that you acknowledge this repository in any research that results from the use of these data sets. The data can be viewed and manipulated in CloudCompare an opensource software.