The Perrenoud Homestead is located just north of the town of Cochrane, Alberta. Designated as a provincial heritage site in 1992, the heritage value of the Perrenoud Homestead lies within its link to the establishment of early ranching operations in Alberta in the 1880s and 1890s. Brought to the area in a wave of settlement encouraged by grazing leases in the late 1800s, the homestead was built by Charles Perrenoud who emigrated to Canada from France in 1886 and established his horse ranching operation alongside his brother Earnest. In recent years the original homestead started to collapse. Due to safety concerns, the homestead was dismantled and placed into storage in 2017. This is a decimated point cloud of the Perrenoud Homestead.

In the early 1880s Southwest Alberta was on the brink of becoming the great Canadian frontier. The Canadian Pacific Railway was constructing links across the continent to join Eastern Canada to British Columbia, treaties were being made with the indigenous populations, and the North West Mounted Police held control in the plains [1]. Combined, these factors meant that colonization and settlement of the area was not only possible but also desirable [1;2].

This settlement was further encouraged under policies put in place by Sir John A. MacDonald’s Conservative Party. Under an amendment of the Dominion Lands Act in 1976 the granting of grazing leases up to 100,00 acres was allowed to encourage agricultural settlement, and by 1881 the suitability of the North West for stock raising rather than farming was recognized [2;3].

The Dominion Lands Act was amended again to allow for the large scale granting of leases to nonresidents, and it was under this policy that the first grazing lease was issued to the Cochrane Ranche Company Limited, incorporated by a group of capitalists lead by Senator Matthew Cochrane [2;3]. At a cost of $500,000 the lease granted to the company straddled the proposed route for the Canadian Pacific Railway line along the Bow River, including as well good grazing land in the surrounding hills [2;3]. This area included the land where the Perrenoud Homestead is now located.

The Perrenoud Homestead is located just north of the town of Cochrane, Alberta.  Designated as a provincial heritage site in 1992, the site is composed of two residences situated on 4.5 hectares of land [4;4]. The first of these is a 1890s log farmhouse with a 1902 extension. In 1910 a larger, two story home featuring a hipped roof, and wrapping verandah replaced the log homestead as the primary residence on the property [4;5]. The site also features various other outbuildings and machinery such as a blacksmith shop, granaries, a sawmill, and a cattle chute. The 1890s log farmhouse was built Charles Perrenoud, who immigrated into the area to take advantage of the grazing lease for the land, with the eventual intentions of setting up his own ranching operation. Born in Basencon, France in 1863 and trained as a jeweller, Charles Perrenoud came to Western Canada in 1886 where he spent two years as a traineer rancher at Sheep Creek [3;6]. In 1888 Charles was joined by his bother Earnest, where they moved to Mortimer Coulee just outside of Cochrane to establish their own ranch. Charles staked his claim on a homestead that had previously been part of the grazing lease owned by the Cochrane Ranche Company, and built the log farmhouse. Living separately, the brothers eventually amassed a herd of over 1900 saddle and work horses for their joined operation, including breeds such as Hackneys, German Coach horses, Clydesdales, and Shires [4]. The Perrenouds were one of several French families who participated in the early efforts of establishing profitable ranching operations in the Cochrane area [3].

In 1902 Charles married Laura Phipps. Charles built the first portion of the log farmhouse on his arrival to the homestead from 1888-1890, using trees from surrounding areas as there were none on the property [5]. The extension was added in 1902 when Charles married Laura Phipps. Together they had three children, George born in 1903, Emma born in 1904, and Agnes in 1909 [5]. The family continued to live in the log homestead until 1910 when a new home was constructed. Due to the demands of the Boer War (1899-1902) and the needs of the area’s growing immigrant population the horse market expanded and the Perrenouds’ profits increased [1;3]. This allowed the Perrenouds to build a larger two-story home, which became the main residence on the property and is still standing in its original location today [4].

The original log structure then fell into disuse. When Charles Perrenoud died on April 30th, 1929, the ranch was passed to George Perrenoud who took over ranching the property [5;6]. Laura continued to live in the ranch house until her death in 1979. George then died in 1981 where he willed the homestead site to be donated to the Province of Alberta and be developed as a historic site [5].

Since the early 1900s when the Perrenoud family moved into the new residence, the original log homestead has started to collapse. By the summer of 2017 the roof of the 1902 extension had fallen in on itself, and the structure was overall unstable. Due to the homestead’s significance as a site with links to early settlement and ranching operations in the area, a need for including it as a site to be digitally documented and preserved was recognized.

All histroical images were sourced from the Glenbow Archives while all modern images have been provided by the Capture2Preserve Team. 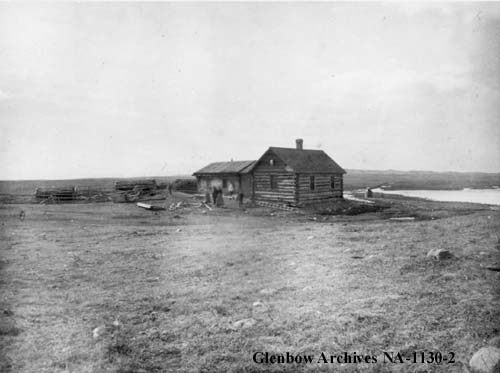 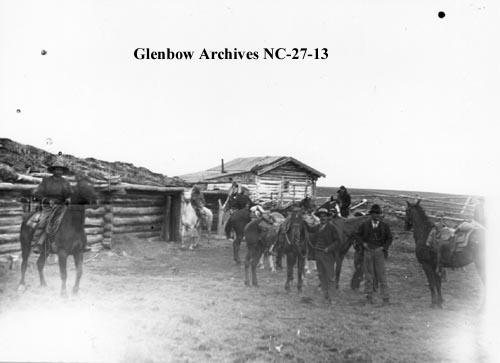 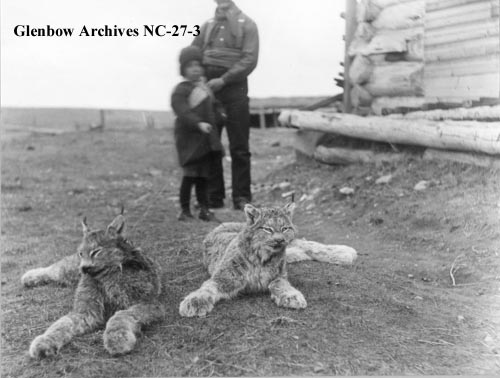 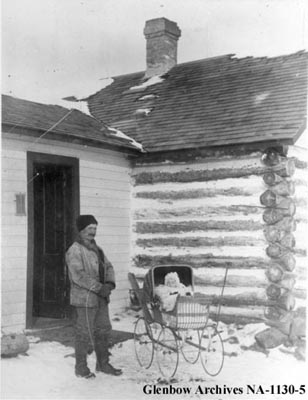 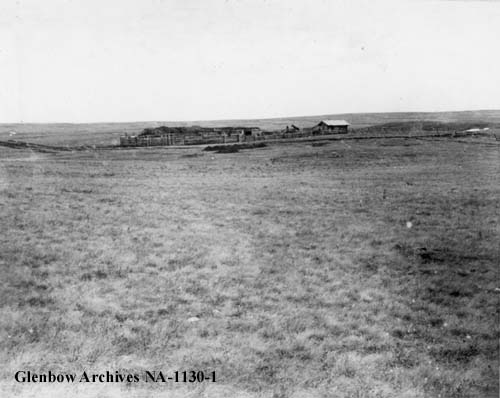 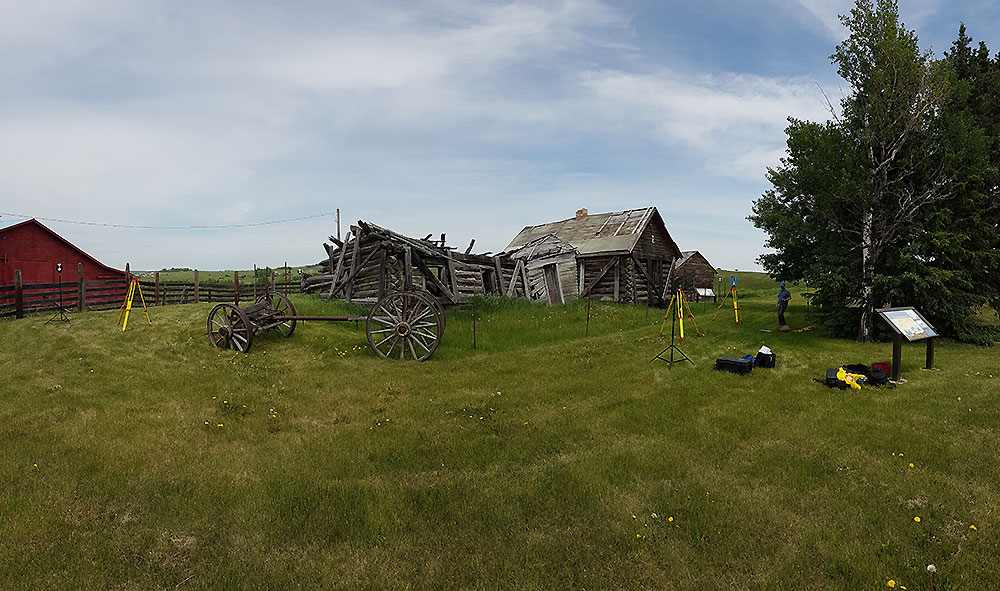 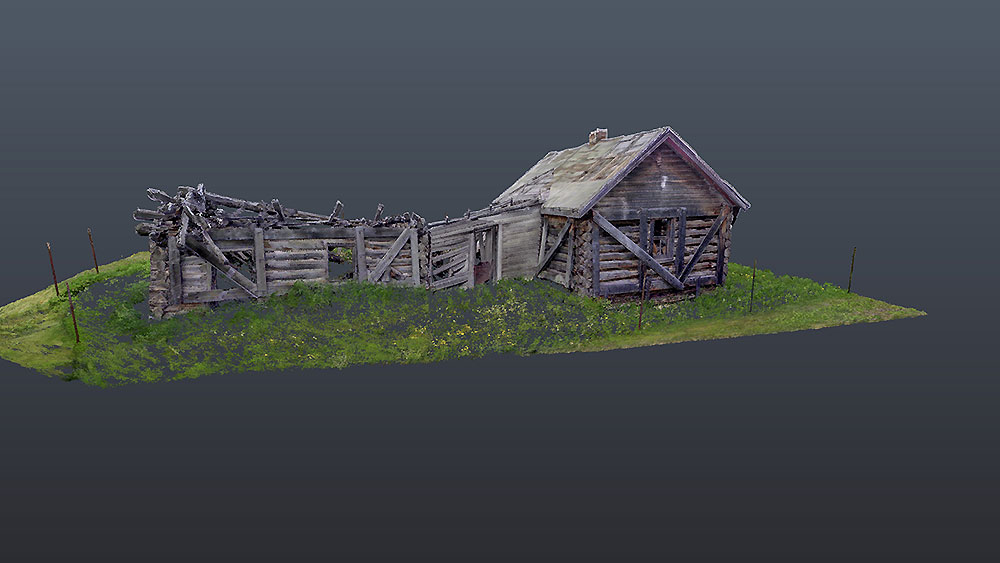 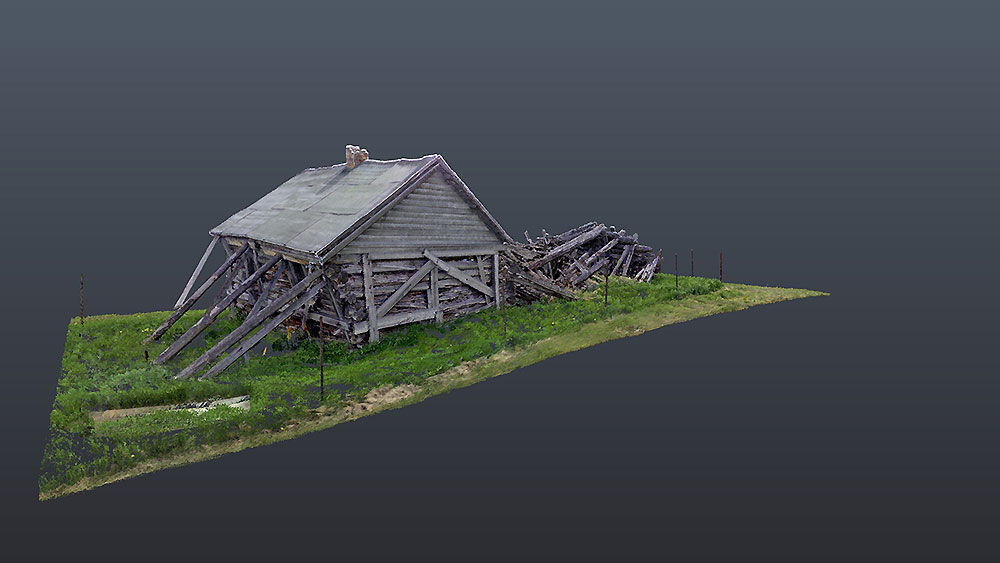 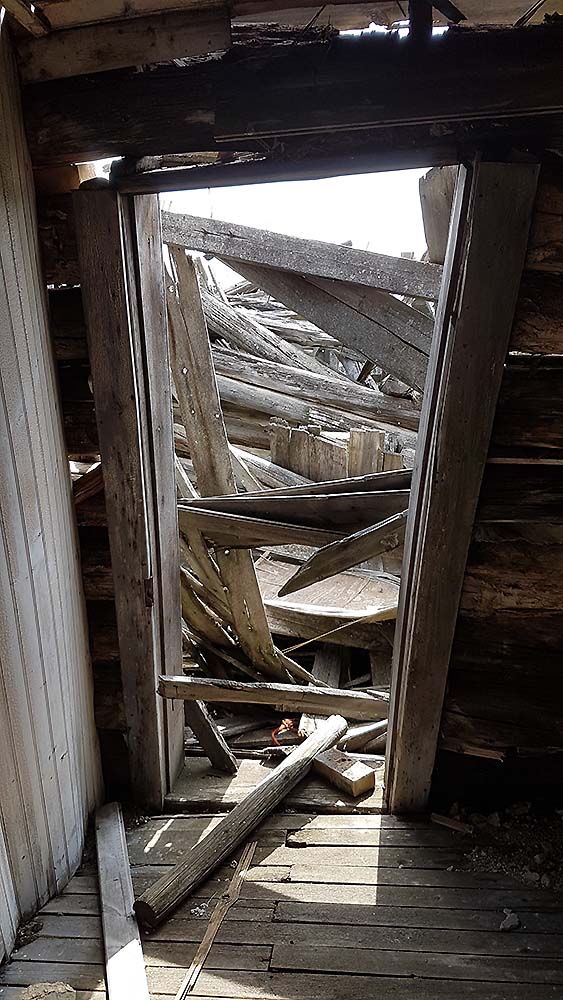 Five sets of scans with the Z+F 5010X were taken of the Perrenoud Homestead during the dismantling process. The first set of scans were conducted on June 8, 2017 (Images: Scan Locations and Image Scan Location 5). The log house was scanned again over a four day period (July 18, 20, 25, 26, 2017 [in order  Scan Locations 1-4 & 6-9]) in order to capture various stages of its dismantling for storage. Six paddle targets were distributed around the log structure, such that a minimum of three were visible in each scan. This was done to facilitate the registration of all scans into a single 3D point cloud.

With each scanning session, the log house became smaller and smaller, as structural elements like log walls were carefully and skillfully removed for storage by heritage technicians. As a result, daily scanning of the log house provides an accurate record of how the structure appeared at each stage of the dismantling.

The initial scanning of the complete building required 10 different scanning locations. In contrast, scanning the remaining section of the structure on the final day of dismantling required 8 scans.

The interior of the largest intact section of the log house was also scanned, and provides useful information documenting how the building had been modified in later years for a variety of uses. 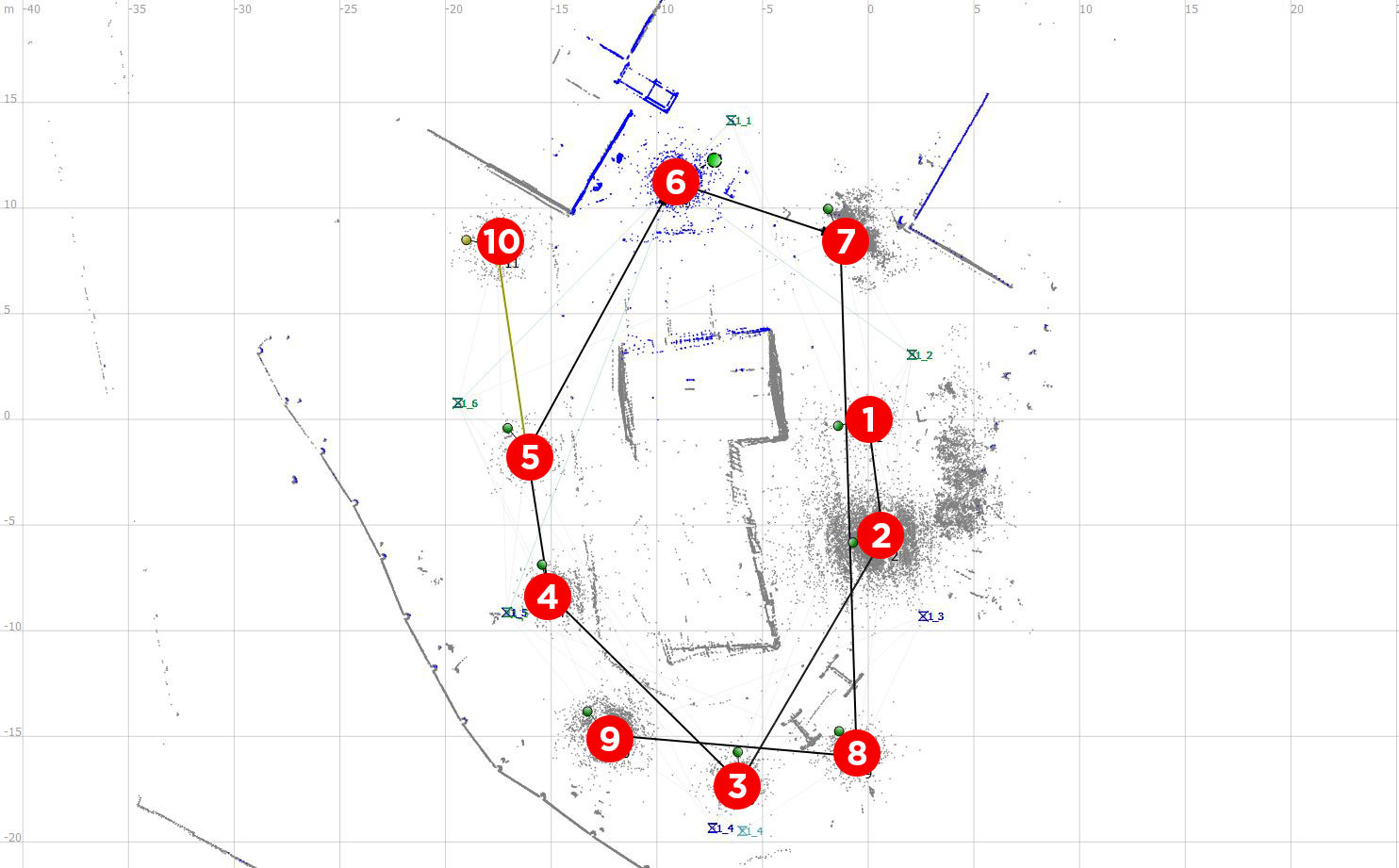 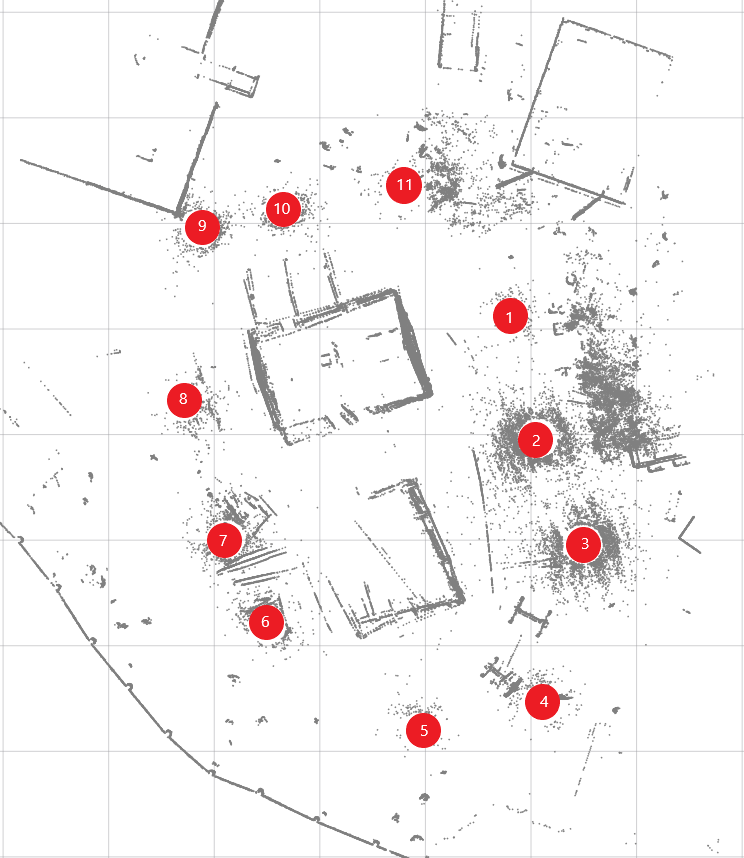 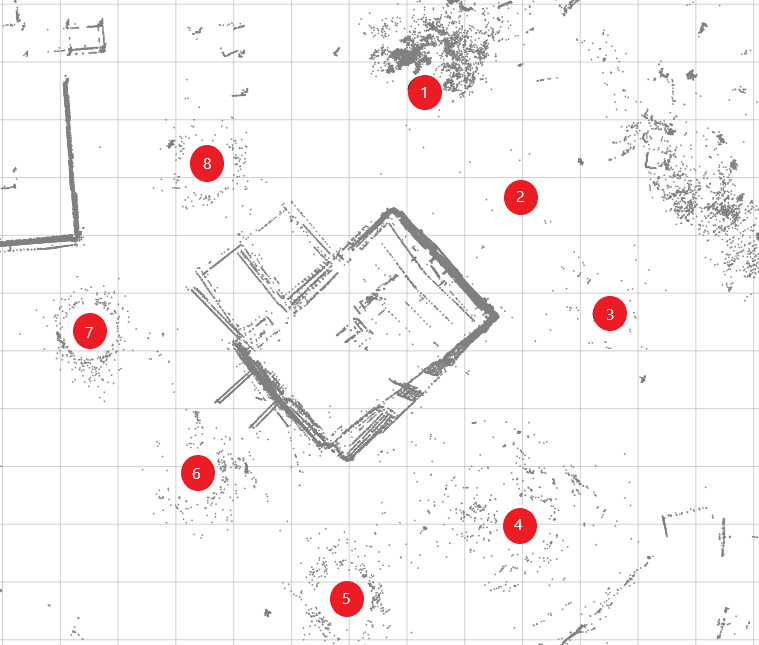 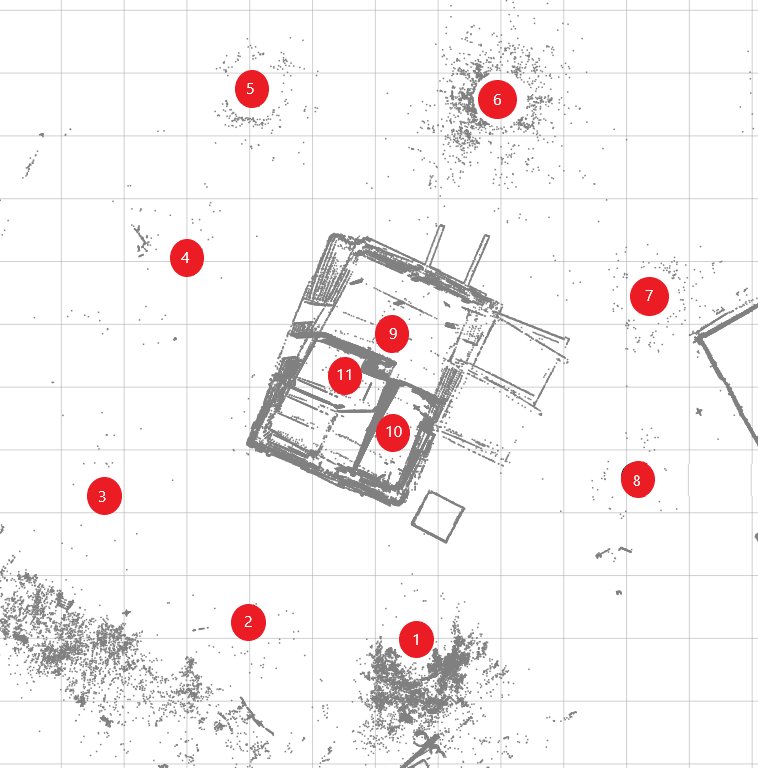 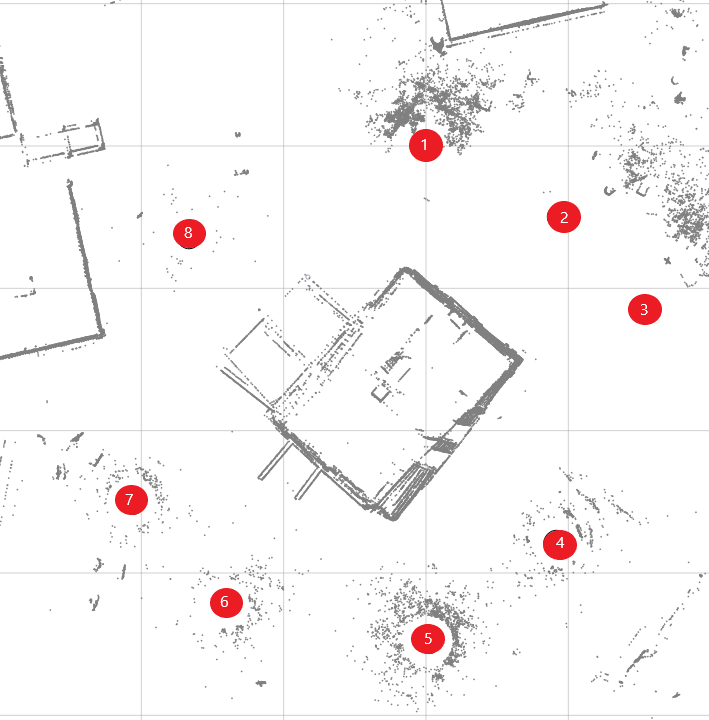 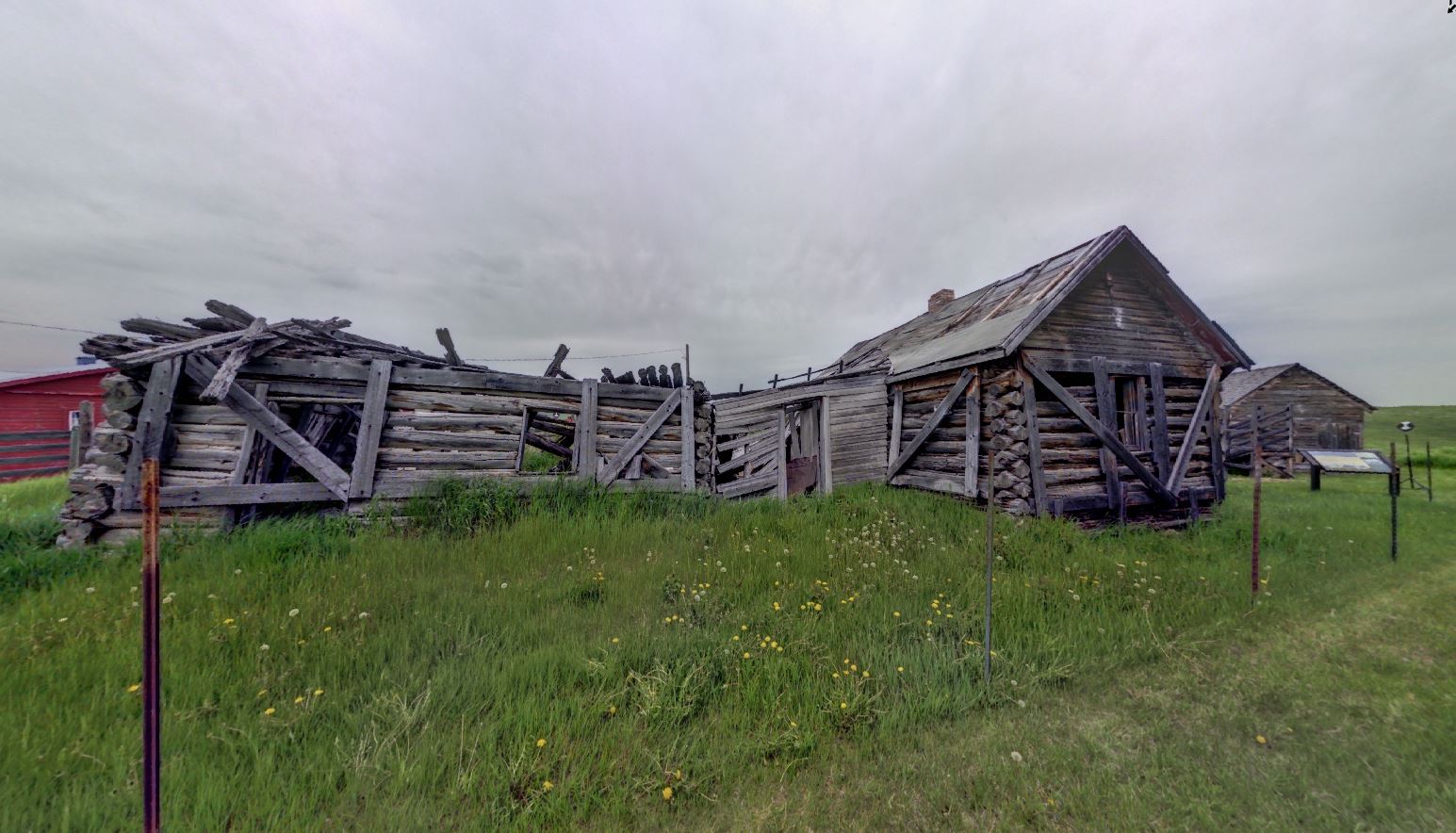